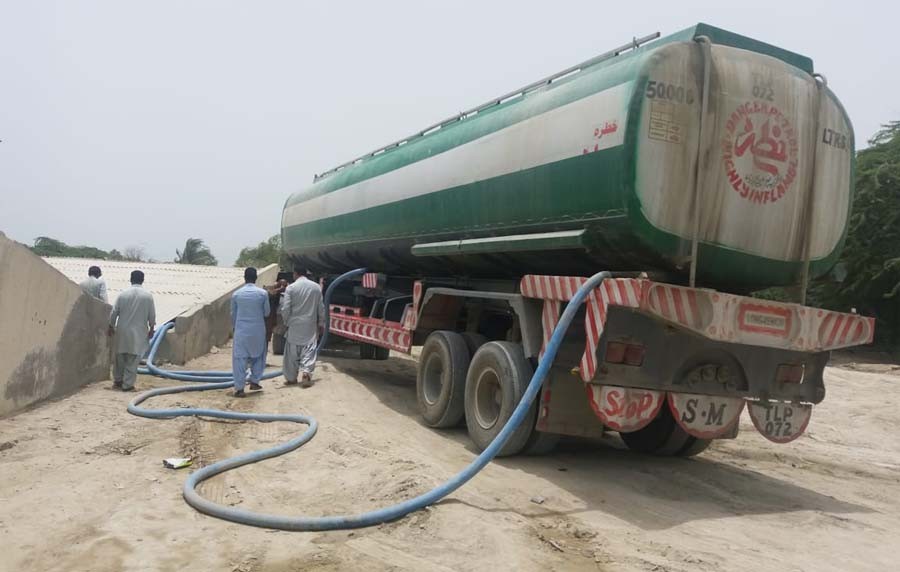 Captain Rasool Bakhsh, 60, has two kids and has been living in Gwadar since childhood. A fisherman by profession, Rasool Bakhsh has been fishing close to deep sea port of Gwadar. Among the many issues that he and other fishermen face is water. "With almost no rainfall in the area and dried up dams, there is a serious shortage of freshwater in Gwadar," said Rasool Bakhsh.

Another fisherman, Ilahi Bakhsh who lives in Doria village close to the sea in Gwadar, complained that he also faces great difficulties in getting safe drinking water. "We want development that benefits us and in the current scenario we don’t see it happening," said Ilahi Bakhsh.

"Due to prolonged drought in Gwadar, the government is providing us water through tankers but it is not sufficient to fulfill our daily requirements, as only 30-40 gallons is provided to each household once a week," informed Ilahi Bakhsh about the water arrangements made by the government to address the water woes of the city.

Gwadar, the port city in Balochistan, is the only deep sea port of Pakistan. The port gained strategic importance after China and Pakistan joined hands to initiate the China-Pakistan Economic Corridor Project (CPEC), worth $62 billion. CPEC is one of the most important components of China’s trillion dollar One Belt, One Road initiative.

Though it is estimated that billions of rupees would be invested in Gwadar as part of CPEC, at the moment, the city faces immense issues with water scarcity being the biggest one.

During the writer’s stay in Gwadar, he met many people, most of whom were associated with the fishing industry. One of them was Muhammad Rafi who had a similar story to tell. He said, "From the past 4-5 years there has been no rainfall and the temperature has also increased due to which we have been facing immense problems."

One of the members of Zer Fishermen Welfare Society Gwadar, Abdul Sattar, a 35-year-old with three children, spoke of his hardships in getting water. He informed, "From the past 5-6 years there is no rainfall due to which all of the local dams have dried. However, in order to meet the water requirements, water is coming through tankers from Turbat’s Mirani Dam, which costs around Rs15,000-18,000."

Sattar also said, "The government provides water via tankers once a week. The Akra Kaur Dam, also known as Ankara dam, has been dry for the past four years and the Sawad Dam constructed over the past one year is empty, as it relies solely on rainfall in order to provide water. No one is thinking about the local communities of Gwadar who should be reaping the benefits of these ongoing developments," complained Sattar.

How government provides water to the people of Gwadar

Water comes to Gwadar via water tankers from the Mirani Dam situated in Turbat, covering a one-way distance of 142-km. It is first delivered to the water works town, after which it is supplied to the rest of the city. This water is stored in three large underground inter-connected tanks containing 500,000 gallons, 300,000 gallons and 200,000 gallons respectively and tankers are filled from this point. Here the officials of the Union Councils (UCs) distribute water to their respective UCs. At the entrance of the water works town, a police constable, an army official and a clerk from the Public Health Engineering (PHE) Department record the number of tankers supplying water to various UCs in order to ensure transparency.

The tankers supplying water to the people in Gwadar are the same as the ones being used to supply petrol and diesel, which clearly indicates that this water must be highly infested with pollutants. These tankers are mostly owned by private people, meaning the government has to pay for these services. So far the government has spent billions of rupees in payments to the tanker owners for their services in transportation of water. People have to buy water to fulfill their daily water requirements.

In a recent development, the government of Balochistan has signed an agreement with a Russian company - Climate Global Control Trading - which will facilitate cloud seeding in the drought-hit areas of Gwadar. A senior government official said it will cost approximately 5 billion rupees.

Gwadar has three dams. Akra Kaur Dam, also known as Ankara Kaur Dam, was constructed in the 1990s and is situated 32 km north of Gwadar. Initially its storage capacity was 17,000 acre-feet but has now been reduced to 6,000 acre-feet due to lack of maintenance. Presently, it is completely empty due to no rainfall. Mirani dam is a reservoir fed by the Kech river and the Nihing river. Mirani dam was commissioned by WAPDA in 2001 and completed in July 2006. Sawad Dam, Shadi Kaur Dam and Belar Dam are ready to function except for the fact that there is no water to fill them up with. Furthermore, the pipelines linking them to Gwadar still need to be laid down.

The Gwadar Port authorities stated during a meeting that there are two desalination plants constructed by the Chinese, one of which provides 100,000 gallons of water daily, while the other one with a capacity of 250,000 gallons is not operating at its full capacity and is solely meant for port activities.

The government of Balochistan has signed a MoU with China Overseas Holdings Limited which will enable the Chinese company to provide 300,000 gallons of water daily at 0.80 rupees per gallon. This desalinated water will later be provided all across Gwadar through tankers.

What does science have to say on drought in Gwadar?

A study conducted by United Nations Development Programme (UNDP) Pakistan titled Drought Risk Assessment in the Province of Balochistan, Pakistan (URL: http://www.pk.undp.org/content/dam/pakistan/docs/CPRU/Disaster%20Risk%20Management/Drought-Risk-Asst-Balochistan-Nov%202015-lowres.pdf), has revealed that about 60-70 per cent of the population is foreseen to be at direct and indirect risk from drought in Balochistan. It is so far the latest study on the topic.

The study coincides with the views of local inhabitants that Balochistan is experiencing drought since 2013, as there has been hardly one fourth of the usual rainfall, which earlier used to be approximately 200-250 mm.

The study classifies droughts into four different categories: meteorological, agricultural, hydrological and socio-economic. Unfortunately, the drought is said to affect the landless labourers and small farmers. Due to subsequent losses in agriculture and livestock, the poorest of the poor have been left with no option but to sell their valuables to survive.

The drought study by UNDP Pakistan calls for sustainable management of water resources to fight the impact of drought. Specifically regarding Gwadar, the study states that the district is characterised by moderate temperature and low rainfall. However, the adverse drought conditions across the province have affected Gwadar as well. The degree of drought that affects the population of Gwadar is estimated to be 30-55 per cent.

In the study’s food security classification of districts in Balochistan, Gwadar is listed in the ‘highly food insecure’ category requiring immediate attention, signaling that a crisis has emerged primarily due to water scarcity.

Tahir Rasheed, a senior environmentalist, said the issues of Gwadar are no different from other cities of Balochistan. "Being a strategic port city, Gwadar has gained immense importance after the CPEC and estimates predict that an uptick in investments will trigger migration from other cities to Gwadar. This underscores the need to invest in climate-resilient infrastructure and ensure the provision of basic facilities, including water. However, before any project is initiated, Environmental Impact Assessment (EIA) and Initial Environmental Examination (IEE) should be carried out," said Tahir Rasheed.

He went on to say, "The biggest issue that continues to haunt Gwadar is water. Being close to the sea, its groundwater is brackish, therefore we have to rely on surface water or desalination plants. To make Gwadar a viable city, the water issue has to be addressed on war-footing."

"Bringing water from Turbat isn’t a sustainable solution. Reverse Osmosis (RO) plants at the village level can help. Another idea can be to get water from Iran just the way we are getting electricity for our border districts," added Tahir Rasheed.

Mome Saleem, an environmentalist and policy researcher, looked at the water scarcity issue from another perspective. According to her, "Human security means provision of basic rights to people. Water security is its foremost component hence under the CPEC we need to consider it. The entire Balochistan is grappling with water issues and we must not ignore the importance of water in sustaining life and livelihoods."

Mome suggested that the government should establish desalination plants indigenously which will be a practical solution. "The MoUs with various partners for the provision of desalinated water should be framed in such a way that they are revised on a yearly basis and when Pakistan builds its own plants, it should end such contracts," added Mome.

Environmentalist from Balochistan Tariq Zehri explained that the Sur Bandar desalination plant has been successfully constructed by Pakistan and is operational at a capacity of 200,000 gallons per day. "However, in order to ensure its equitable distribution, the water pipelines will be laid down. At the moment, this water is being supplied through tankers."

The total water requirement of Gwadar is 0.8 million gallons per day (mgd). The capacity of the Sur Bandar desalination plant will be further enhanced and will cater to most of the port city’s water requirements.

Abdul Rahim, Assistant Director Environment, Gwadar Development Authority (GDA), also confirmed that Sur Bandar’s desalination plant will provide 0.7 mgd of desalinated water to the people of Gwadar. According to him, "The cost of desalination plant is two billion rupees. The Chinese desalination plant at the free port has a capacity of 250,000 gallons per day and is operational for 5-6 months. It costs Rs1.2 billion to set up such a plant, but it is unfortunate that the transportation cost of bringing water from Turbat’s Mirani Dam for eight months was Rs1.4 billion. This money could have been utilised to construct a desalination plant, which was a viable solution."

"Furthermore, this water from polluted tankers has led to various water-borne diseases among the locals including hepatitis, stomach problems and kidney issues," added Rahim.

Zeeshan, the operator of the desalination plant at the economic zone, informed TNS that currently it provides 100,000 gallons of water per day and is operational for eight hours only. However, the plant can provide up to 250,000 gallons per day, thus confirming there is a daily surplus of 150,000 gallons of clean water which can be supplied to the locals of Gwadar. This desalinated plant has been functional for the past eight months, but since there is no agreement between the Balochistan government and the Chinese who own the desalination plant, a golden opportunity has been missed.

Science has shown that artificial rain has emerged as a new force to tackle drought and desertification and this idea has captured the imagination of the bureaucracy of Balochistan as well. Bringing water from Mirani Dam to Gwadar for only one year cost two billion rupees. In a recent development, the provincial government of Balochistan has signed an agreement with a Russian company - Climate Global Control Trading - which will facilitate cloud seeding in the drought-hit areas of Gwadar. A senior government official who did not wish to be named informed that it will cost approximately 5 billion rupees.

The project will cause artificial rain of about 300mm over the catchment area of four dams in Gwadar, which will help fill the dried dams and meet the water requirements of the district for a greater period of time. The provincial cabinet of Balochistan, after approving the project, has formed a team comprising experts from the Department of Environment and Irrigation, who will be visiting Dubai to review the cloud seeding model being implemented there and subsequently submit a report.