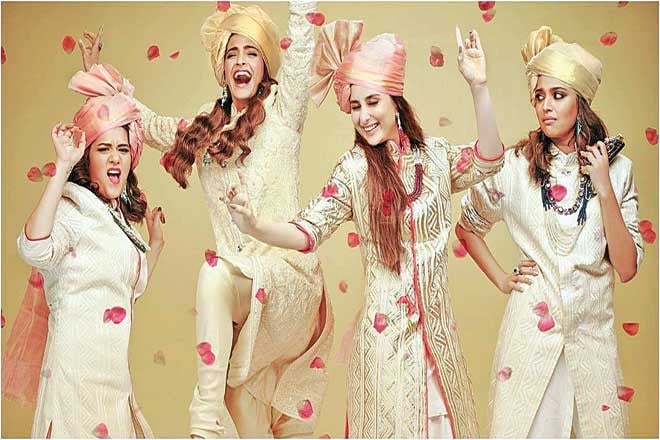 Veere Di Wedding has four old school friends getting back together when one of them, Kalindi (Kareena Kapoor) decides to take the plunge despite all her misgivings (due to coming from a broken family, yadda yadda yadda). The rest of the gang is made up of divorce lawyer Avni (Sonam Kapoor), Sakshi (Swara Bhaskar) and Meera (Shikha Tilsania). Avni’s mother (Neena Gupta) is desperate to get her married off, Sakshi is in the middle of a nasty divorce and Meera is coming to terms with dealing with a baby and a gora husband. The reunion opens up some old wounds, leads to some new discoveries and, then, ultimately (and inevitably) to some good old-fashioned female bonding.

That’s all fine and dandy and it’s good to see a movie driven by a mainly female cast. I’m also all for girl power and the strength of sisterhood but, surely, it’s got to stand for something a little more than deciding whether to get married or not or getting divorced or not or finding a husband through a marriage site or not or trying to rediscover your sex-drive after childbirth. All the while using language coarser than a sailor’s, chugging back shots like there’s no tomorrow and having sex with practically strangers (or, ahem, taking matters into your own hands - you’ll know what I mean when, or if, you see the movie). Meaning acting pretty much like badly behaved boys.  Plus the script is hardly original - take parts of Bachelorette, Bridesmaids, Rough Night, Girls Trip, etc., mix with a desi sauce and, voila, you get Veere Di Wedding. A confection which neither pushes any emotional buttons nor the boundaries of good taste or absurdity (there are a couple of outrageous scenes but, I mean, why not really go for broke, if you are aim to tread new territory) and, as such, on the whole, hardly makes for a satisfying meal.

Fifteen years or so ago, Dil Chahta Hai came along and gave us a movie for the ages about male bonding. Veere Di Wedding could have been the present day female version of that. It isn’t.

Cut to chase: This ain’t Dil Chahta Hai for gals.

Life Of The Party***

When frumpy housewife Deanna (Melissa McCarthy) finds herself suddenly dumped by her husband, she decides to go back to college to complete her degree, joining her daughter, Maddie (Molly Gordon) at the fictional Decatur University for her senior year. Of course, Maddie is mortified but slowly Deanna worms her way into the hearts of Maddie’s sorority sisters while rediscovering herself in the process.

Once you get the basic setup of the movie - and that pretty much happens in the first 10 minutes or so - it’s pretty much predictable from then on. But McCarthy - with the help of husband, co-writer and director Ben Falcone -manages to deliver a charming little entertainer which manages to deliver more than a few solid laughs along the way. This is partly because McCarthy and Falcone have dialed back the coarseness of some of McCarthy’s lesser offerings like The Boss and Tamm.  The naughty McCarthy isn’t all gone but Life Of The Party plays up her kinder, gentler side and it works. Good support is also provided by a talented cast which also includes Maya Rudolph, Gillian Jacobs and Julie Bowen.

Cut to chase: Predictable but with enough funny moments to keep you going.