Legends of the canal

Swimming, bathing and washing clothes is prohibited in canal not just due to the polluted water but also because it entails dangers 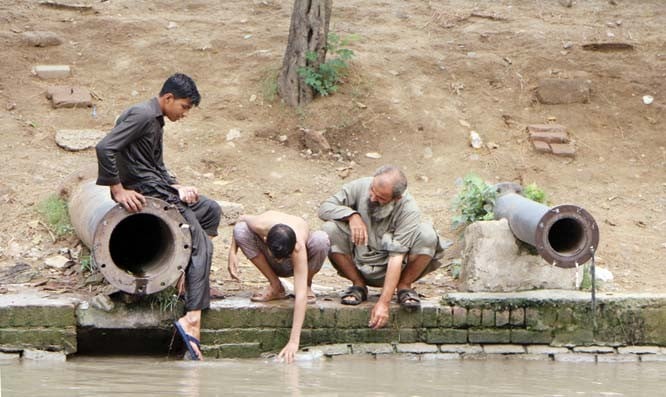 As the monsoon begins, and rains lash the city, the canal flowing through Lahore attracts fewer visitors who would otherwise rush to the cool waters and take a dip or simply sit by the side in order to escape the summer heat.

The change in the number of people is noticeable as there are less traffic jams on the canal bridges where the revellers (mostly teenage boys) usually jump from. The pushing and shoving to be the first in the line, the whoops and cheers, and the enthusiasm, all present a merry picture.

I grew up with the understanding that such outdoor entertainment was only meant for males. But I was wrong. I recently spotted ladies, huddled together at the banks of the canal, with their legs knee-deep in the water, and enjoying themselves. They would occasionally take a dip whenever it was less crowded. Some were even seen washing clothes.

As a commuter who often takes the canal bank road, I often wondered why anyone would dive into this water which you can even tell from a distance is muddy enough and full of filth. The other day, I just stopped my car on a side and hopped over the fence to have chitchat with the few people I saw there.

Fakhrunisa Bibi was washing a pile of clothes in the canal; she was using soap that left a trail of foam that snaked its way right into the water. When quizzed, she told me, "The water supply back home is short; sometimes days go by without it. But whatever is to be done is to be done. Hence, we are here."

Bibi also said that when she used to live in her hometown (a small village in the suburbs) she would routinely go to the pond outside the village with her friends, to wash clothes. "But here things are different. So I have to come by myself."

At a little distance from her, Aziza Bibi sat with her feet inside the water while her young daughter and sons enjoyed a bath in the canal. I asked how she allowed her children to take a bath in such polluted water. She replied, sheepishly: "Do I have a choice? The children have summer vacations from school, and they don’t have any places to go for excursions. They are growing up, and need some healthy activity so ask to keep away from shaitani kaam (evil deeds)."

I asked her what she meant by shaitani kaam, and she said, "You know, these days the youth is into mobile phones, drugs, and all kinds of abuse. That’s why I keep strict watch over them."

Rashid Minhas, Executive Engineer in the Irrigation department, says, "We have put up signs that warn people against taking bath in the canal, but they don’t listen."

She revealed that her husband is a bus driver, and so it is her who has to plan outings for their children.

After listening to her, I kept wondering as to who should be blamed in such circumstances. I saw a few adolescents laughing and playing around. A number of them were taking turns to dive from the highest point -- the bridge. I stood there, watching them swim even as they stared back at me, perhaps because I was carrying a camera and trying to zoom in on them. Finally, one of them came up to me and asked if I was from a TV channel. When I told him I was a newspaper journalist, he called out, "Baji akhbar se hain! Aa jao!" Within seconds, a slew of them had gathered around me.

Once their queries about journalism ended I asked where they were from and if they were in school. One of them said, "We are students of matric. We live near Kotha Pind. As our school is off, we come here almost every day."

I asked if their parents knew they were here and all of them said, "No, we don’t tell them, otherwise they wouldn’t let us [come here]."

When asked if they ever developed skin rash from polluted water, one of the youths said, "Never." Period.

At different periods of time and especially on occasions like Jashn e Baharan, 23rd March, and 14th August, various organisations and institutes put up displays along the canal which include illuminated floats and hangers. All these make for an eye-catching experience at night.

Rashid Minhas, Executive Engineer in the Irrigation department, says the decorations are put up under the Punjab government. He tells TNS that the warning signs are clearly posted along the canal, "We have put up signs that warn people against taking bath in the canal, but they don’t listen."

The canal water is also used for irrigation purposes for which various sluices have been made. I stopped at a point where the canal staff was working. They told me about two sluices, one of which supplied water to FC College and the other to the central and adjacent parks in Model Town. That was an interesting insight into how things were planned in the earlier days.

While I was returning I looked out for some life guards just in case an emergency takes place, but in vain. The only thing remotely connected to ‘authority’ was a mobile police that would stop off and on and the policemen inside would yell at the bathers to stop and leave.

Legends of the canal