Politics of the caretakers 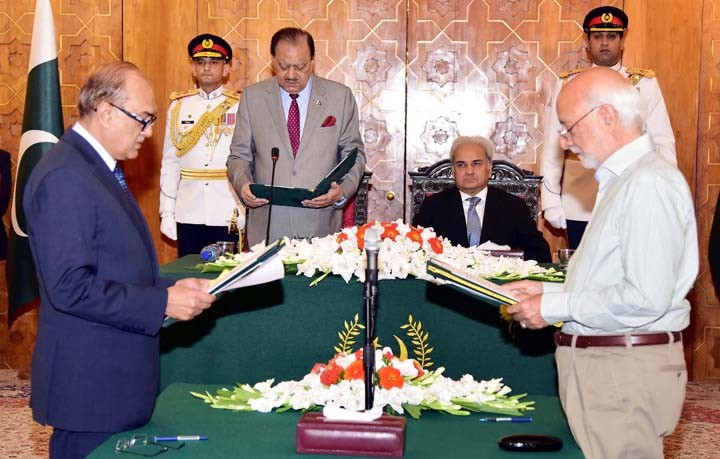 Less than a month before the general elections on July 25, the caretaker government expanded its federal cabinet by inducting two more ministers and raising its strength to eight.

President Mamnoon Hussain administered oath to retired Lt Gen Khalid Naeem Lodhi, a former secretary defence, and Mian Misbahur Rehman, a resourceful businessman, as ministers on June 27. Lodhi was made minister of defence and defence production and given additional charge of aviation and national security divisions. Misbahur Rehman was assigned the portfolios of ministry of textile, commerce and trade.

One finds it difficult to comprehend as to why the cabinet was expanded and how the new ministers can contribute in the short period before the polling day.

Nasirul Mulk, a retired chief justice of Pakistan, had taken oath as the country’s seventh caretaker prime minister on June 1 following an agreement between the outgoing prime minister Shahid Khaqan Abbasi and opposition parliamentary leader Syed Khurshid Shah on his name. He kept his promise of picking a small-sized cabinet even after expanding it to eight ministers. However, the same cannot be said about the caretaker cabinets in the provinces, particularly in Sindh where a 17-member cabinet was formed. In fact, most of the caretaker chief ministers in the provinces after announcing the first batch of ministers made it obvious that they would be taking additional ministers as well. This again raised the question whether so many caretaker ministers were needed for the brief, less than two months period at their disposal.

Some of the caretaker chief ministers have been criticised for accommodating their friends in the cabinet. Others faced criticism for failing to select capable and credible ministers. It appeared that whoever was offered a position in the caretaker government readily accepted the offer and there were also report of people lobbying with the powers that be for a berth in the cabinet. The notable exception was Nasir Khan Durrani, the retired cop whose last posting was the Inspector General of Police (IGP) of Khyber Pakhtunkhwa, who declined the offer due to poor health when his name was proposed as Punjab caretaker chief minister.

Pakistan is rare example of a democracy where the elected government is required to step down to make way for a caretaker administration for holding the polls.

Except Sindh, where the outgoing PPP chief minister Syed Murad Ali Shah and leader of the opposition Syed Izharul Hasan of the MQM reached agreement on appointment of retired bureaucrat Fazlur Rahman as the caretaker chief minister, the caretaker chief executives in the other three provinces were selected by the Election Commission of Pakistan. The politicians had failed to reach consensus on mutually agreeable names and forfeited the right to make the nomination.

The Pakistan Tehreek-e-Insaf (PTI) was pleased with Dr Hasan Askari’s nomination in Punjab as it had proposed his name, but the Pakistan Muslim League-Nawaz (PML-N) was critical of his selection as it considered him biased towards it and even boycotted his oath-taking. After being rejected by the PML-N, arguably the major political party in Punjab, the respectable option for Dr Hasan Askari would have been to resign so that a more neutral person could be selected. He opted to stay on as he felt he was neutral. In case there are allegations of rigging in the election in Punjab, which due to its huge population and assembly seats will decide as to which party will rule Pakistan, some of the blame would be put at the door of not only the Election Commission but also Dr Hasan Askari.

In Khyber Pakhtunkhwa, retired Justice Dost Mohammad had been proposed by the opposition leader Maulana Lutfur Rahman of the JUI-F and opposed by the PTI. Already, certain PTI leaders have accused Justice Dost Mohammad and at least four of his caretaker ministers of supporting the JUI-F in the election process. Surprisingly, the PTI and JUI-F had earlier agreed to nominate an obscure but unbelievably rich businessman, Manzoor Afridi, as caretaker chief minister. His choice was heavily criticised in the media, more so in social media, amid allegations that this became possible due to an unsavoury deal.

The formation of caretaker government to supervise holding of general election shows the lack of trust in the incumbent elected government to organize free, fair and transparent polls. The idea is to appoint technocrats or otherwise neutral persons as caretakers to hold credible election. It represents the failure of the political parties to devise a foolproof system of transparent elections by strengthening the Election Commission and proposing and implementing electoral reforms. In recent years, the Election Commission has been gradually strengthened and in the process the caretaker government has become weaker.

Pakistan is rare example of a democracy where the elected government is required to step down to make way for a caretaker administration for holding the polls. This is an imperfect way and it is time efforts are made to create trust in the elected government to hold elections instead of entrusting this task every five years to an almost powerless caretaker government.

Politics of the caretakers