With Balochistan Awami Party touted as a major player in the next election, electoral alliances between all other political parties are crucial to prevent its onslaught 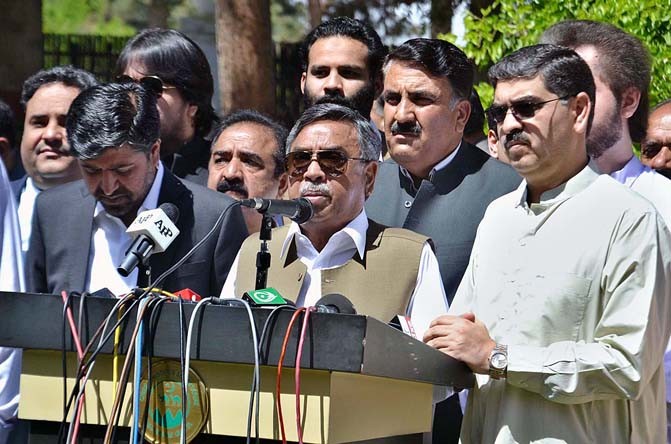 There are 16 National Assembly (NA) and 51 provincial assembly seats for 33 districts of Balochistan which has got two more seats for the NA after delimitations.

The centre of attention in electoral alliance formation is the Khuzdar district of Balochistan, where there are three provincial and one NA seats.

In Khuzdar, Balochistan National Party (BNP)-Mengal has formed an alliance with the right wing Jamiat Ulema-e-Islam-Fazal (JUI-F). This is a unique alliance where the former is a left wing ethnic nationalist party and the latter a right wing religious conservative party. The agreement stipulates that both parties will support candidates of BNP on NA-269 and PB-40 and candidates of JUI-F on PB-38 and PB-39.

In the last general elections, BNP-Mengal lost NA-269 to JUI-F with a narrow margin (the constituencies, both national and provincial, have stayed the same in this district even after the delimitation).This time the alliance of both the parties has made the victory of BNP almost certain on this seat.

"In Khuzdar district BNP-Mengal, JUI-F and National Party have a solid vote bank and any two parties which form an alliance win," says Younus Baloch, a local journalist from Khuzdar. He claims it’s almost certain that BNP-Mengal and JUI-F coalition will win NA-269 and PB-40 but they will also give tough time to the remaining two provincial assembly seats of Khuzdar.

Nawab Sanaullah Zehri, former chief minister, who is contesting elections from PB-38 (district Khuzdar) on a PML-N ticket, has to face the consequences of JUI-F and BNP-Mengal alliance. Same is the situation of former agriculture minister Sardar Aslam Bizenjo, contesting from PB-39 from the platform of National Party. He even went to meet and get the political support of an infamous warlord, alleged to be the patron of ISIS in the region. This meeting of Bizenjo was vehemently criticised on social media and consequently he denied forming an alliance with the warlord.

Agha Hassan Baloch, spokesman of BNP-Mengal, sees no double standards in the alliance of BNP-Mengal with JUI-F. "This alliance was formed in the interest of the people of Khuzdar and it’s a pure democratic move," he says.

Electoral alliance formation is also in full swing in the provincial capital Quetta. The electoral situation in Quetta has become complex and interesting after the increase in seats in the aftermath of delimitations. National Assembly constituencies have increased from 1.5 to three while the provincial assembly constituencies from Quetta have increased from six to nine. This means there will be more competition this time around and hence, increased political activity. No single party has dominance in Quetta and the vote bank is normally classified into different pockets based on ethnicity.

Apart from Baloch, Pashtun and settler votes, there is also sizable number of votes of the persecuted Hazara community in Quetta. After the increase in seats from Quetta, two provincial assembly seats can potentially be won by Hazara candidates. In PB-25 and PB-26, Hazaras are in a strong position and other political parties are approaching them for possible alliances.

"We are negotiating with ANP, BNP-Mengal, JUI-F and Balochistan Awami Party (BAP) for any possible electoral alliance," says Bostan Kishtmand, the spokesperson of Hazara Democratic Party (HDP), the largest Hazara-only party. Majority of the Hazaras support HDP though some do support Hazara candidates in other parties.

Kishtmand says that HDP is not only considering alliances in PB-25 and PB-26 but also in NA-264 and NA-265: "We see elections as a means of integrating with other ethnic communities living in Quetta." However, he is still unsure if the upcoming elections will be fair and free in Quetta. "In 2013, votes polled to our party were discovered in trash outside polling stations; therefore, we have our doubts about how the elections will be conducted."

Agha Hassan Baloch says that BNP-Mengal is open to electoral alliances with like-minded parties and is already negotiating with HDP and ANP. Baloch is contesting election on NA-266 Quetta against the outspoken JUI-F leader Hafiz Hussain Ahmed. Unlike in Khuzdar, BNP-Mengal and JUI-F are not entering into any alliance in Quetta because of direct competition between both parties on Baloch’s seat and some provincial assembly constituencies.

The new phenomenon in this election is the newly created, some might say engineered, party -- Balochistan Awami Party (BAP). Allegedly a creation of establishment, BAP is proving to be a major player in the next assembly. Analysts think that electoral alliances between all other political parties are crucial to prevent the onslaught of BAP. Other big names contesting from BAP’s platform are Jam Kamal, Sarfraz Bugti, Quddus Bizenjo and Zubeida Jalal. Of these Quddus Bizenjo is contesting from Avaran and Quetta.

If more alliances like BNP-Mengal and JUI-F in Khuzdar are formed all over the province, there can be some balance in the next assembly. Otherwise, it will be easy for BAP to form the Balochistan government. Analysts predict BAP might win 20 out of 51 provincial assembly seats. They also claim that PTI and PPP’s chances have been reduced in Balochistan, especially after the rise of BAP.