Doom and gloom long ago

The Bronze Age ended abruptly, not only because of the Sea People but several other calamities as well 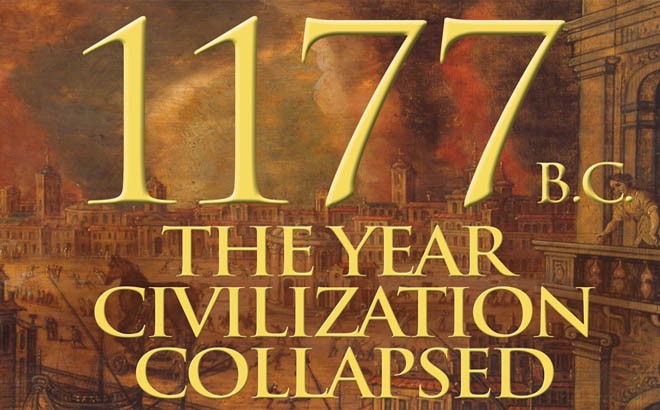 Nearly three thousand and two hundred years ago the Levant, one of the centres of the civilised world, suffered a series of disasters which laid a great citadel to waste and  put an end to the Hittite empire, weakened Egypt and  left many cities, big and small, burnt or reduced to ruin in what is now Syria, Iraq, Lebanon and Palestine. The people of that faraway age, generation after generation, must have felt that there was divine ire in the air for their misdeeds.

Eric H. Cline, a professor of classics and anthropology at George Washington University, has taken a look at that troubled era in a book entitled 1177 B.C. The subtitle that says "The year civilisation collapsed" is a little presumptuous, because civilization was not confined to the Levant. There were cities which belonged to the Indus valley which, by the standards of their times, could be described as fairly advanced. Then there was China. Prof. Cline does not mention them, although Moenjodaro and Harrapa were probably abandoned at a period not distant from the era during which the Middle East was devastated. But more about it later.

The part played in the ensuing havoc by the Sea People is remarkable. They first attacked Egypt in 1207 B.C. and were beaten back. Thirty years later, they returned in great numbers and Egyptians fought them on land and at sea and defeated them, which was quite an achievement. No other country or nation had been able to stand up to the Sea People. The great powers of the day, the Hittites, the Mycenaeans, the Canaanites, the Cypriots and others yielded one by one. The Egyptians, although triumphant, had secured a victory which can only be termed as pyrrhic. Whether it was the battle which unsettled the New Kingdom Egypt, or there was extraneous factor at work also, is something we cannot ascertain now.

Who the Sea People were remains a mystery. We know that the Vikings behaved in a similar manner, raiding and looting, terrorising Western Europe’s coastline. But we know where they came from and many other facts besides. As far as the Sea People are concerned, we are clueless. Most probably illiterate, they have left no inscriptions. We have to rely on the Egyptian version of things.

Cline and other scholars have no clear idea of who these invaders were and where they came from. However, we can see their names and faces carved on the walls of Ramses III’s mortuary temple at Medinet Habu. The names of the tribes which made up the combined army of the Sea People, Eqwesh, Terosh, Lukka, Shardana and Shekelesh, sound menacing. They may not be entirely correct because the names of foreigners are quite often misunderstood and mispronounced. Some of the details are particularly interesting: the lack of facial hair is to be noted; they had no foreskin which suggests that they were circumcised, rather odd, to say the least. On page 2 of the book, a group of eight captives is portrayed. They don’t look European and the figure on the far left definitely seems Mongoloid. It is quite possible that the Sea People set out from Central Asia and Mongolia, all the way to the Black Sea, from where they went by sea and land to leave a trail of destruction behind them. It is also likely that various groups of them may have laid siege to Troy (old name Wilusa) from time to time, hence perpetuating the myth that the war against Troy dragged on for ten years. The facts may have reached Homer in a topsy-turvy manner. So if we assign a Central Asian origin to those so-called marauders, they anticipated the bloody forays of Chingez Khan and his hordes by nearly ten thousand years.

The main question remains unanswered. Why was it that so many places existed only as legendary locations? Big citadels like Mycenae and Tiryns in Greece were never lived in again. The Hittite empire and its capital in Anatolia were lost to history, at least geographically, until only about two hundred years ago. Did the Sea People cause so much havoc? The consensus now among scholars is that no single factor can be squarely blamed for the catastrophes. The Sea People did play a part. So did earthquakes, epidemics and famines. It never rains but it pours.

Perhaps something similar happened to the ancient cities of the Indus Valley. Their population was decimated not by barbaric invaders but the invidious climate changes, epidemics and failing crops. Pakistan is dotted with prehistoric sites, mostly unexcavated. No one in the upper echelons cares for archaeology. History to us is only a source of self-glorification.

Let us turn back to Cline’s book which brings a lot of compelling asides to our notice. The battle of Qadesh, for instance, which took place in 1274 B.C. between the Egyptians and the Hittites. It is one of the greatest recorded battles in ancient history. The Hittites had a force of 47,500 men, which is surely an exaggeration. Whatever the actual strength of the two sides was, it is beyond doubt that two big armies were pitted against each other and the Hittites were defeated. Wars are a costly affair and we don’t know how the battle and its cost may have harmed the combatants’ economy. The Hittites, however, did not call themselves as such. Their name for themselves was something like Nesthites or Neshians.

More interesting was the small Kingdom of Mitanni, ruled over by an Indo-European minority. One of their kings was called Tushratta, rather similar to Dasharatha, an Indo-Aryan legendary character. The rulers probably spoke a language akin to Sanskrit. Unluckily, the archaeologists so far have failed to locate Washukanni, their capital. Or take the case of Mursilil, a Hittite King who, in 1595 BC marched over one thousand miles to attack the city of Babylon, burnt it down and forthwith went home, behaving like Nadir Shah or Abdali, who looted Delhi and walked off with the booty.

More delectable, and much more ancient, is an anecdote connected with King Zimri-Lim who ruled ca. 1750 BC. He needed ice for his summer drinks and ordered an icehouse to be built on the bank of the Euphrates. He claimed to be the first king ever to possess an icehouse. He sent a pair of Cretan shoes, a rare item, to King Hammurabi of Babylon, the lawmaker. The pair was promptly returned. Cline wonders why. If in undivided India of old, someone dared to send a pair of shoes to a prince or a rayah it would have been construed as an insult.

Doom and gloom long ago