Porus, like his Greek rival, has come down to us through Persian literature, questioning Alexander-centric Western narrative 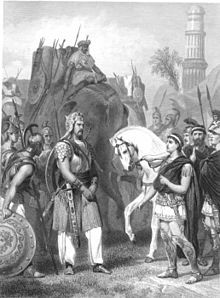 Alexander is one of the most popular characters in human history. He is known as an extremely anxious warrior intending to subjugate the whole world. In his short span of life, he conquered the regions from around the Mediterranean through Egypt, Levant, Iraq and Iran to the part of India which now includes Pakistan. In these military campaigns Alexander coped with great adversities and found mighty enemies to fight with. He succeeded against the King of Kings, Darius III, of the Achaemenid dynasty of the then powerful Persian Empire. This victory was followed by tough missions in various parts of Afghanistan followed by Swat, Taxila and Jhelum. All this happened around 2300 years ago.

In this article the concern relates to Alexander’s campaign against Jhelum. It summarises the background of the invasion and the resistance. Various authors’ perspectives about this encounter have been briefly referred to. The main focus, however, is on a historical problem, an indigenous complaint and an intellectual curiosity. That is that can Porus be located in the socio-cultural memory of the land to which he belonged?

Porus, the man to match Alexander, was the king of Jhelum. He, unlike Raja Ambhi of Taxila, resolved to resist the arrogant invader. He heroically did so as the Greek sources dealing with Alexander’s life would have us to believe. But the irony of the fate was, as the classical writers’ rhetoric goes to say, that Porus could not withhold before the indomitable king of Greece.

The defeated hero was brought before Alexander as a fettered prisoner. He was asked by the victorious Alexander how should he be treated? Porus boldly replied "like a king". The answer so fascinated Alexander that the defeated enemy was not only reinstated but treated in a friendly and respectable way.

This is the story which is preserved in Ancient Greek texts. This is the narrative told by the winners. And it may not go unnoticed that the main protagonist of all this is Alexander, and only Alexander.

This Alexander-centric narrative inspired historical and archaeological researches in British India. His legend was constructed in the colonial situations of modern European imperialism. As I have to avoid dwelling on this point here, readers are referred to a detailed study by C.A. Hagerman (In the Footsteps of the Macedonian Conqueror: Alexander the Great and British India, 2009). However, this Western and winner’s narrative has recently been questioned by some writers. The foremost amongst them is Buddha Prakash, a veteran Indian historian. Making an in-depth textual analysis of ancient, especially Greek, works he reverses the orientalist version of Porus’ defeat with a new interpretation. Prakash shows that a rapprochement, rather than a victory/defeat binary, between the two equals marked the occasion. In his words:

"Both of them [Alexander and Porus] had their own views of the engagement and the final arrangement, of which the Greek version has survived, though in garbled and contradictory editions, and the Indian version has passed into the mists of indifference and oblivion" (Porus the Great, 1994, p. 77).

Prakash’s feeling of ‘oblivion’ is also shared by others. Aitzaz Ahsan, a Pakistani barrister, approaches the problem with a more limited geographic concern and perspective viz. the Indus land (implying Pakistan). His Porus/Alexander narrative seems to have been profoundly informed by Prakash’s insightful study. However, he has narrowed down the story to the conceptualisation of Pakistan, nay the Punjab, as the Indus land, a geographic perspective seeing socio-cultural patterns of this area as in sharp distinction to that happening in the Ganges valley. Porus, for Ahsan, is a Punjabi prince and a victor. Like Prakash, he expresses a deep distrust concerning the Greek sources. And he concludes his discussion with the following lines which give us our next point of analysis:

"So towering was the shadow that he cast that his name (Sikandar) was adopted even by later Muslim citizens of the Indus, many naming their sons after him. Porus and his name also preceded the advent of Islam in Indus. Somehow, the indigenous hero who conclusively blocked the tracks of the conqueror is remembered only in that literary idiom that attributes fright and panic to his elephants resulting in his defeat. No one names his son after the native son of the soil." (The Indus Saga, 2009, p. 55).

One can but mourn with both the authors that an indigenous version of that historic encounter along the banks of Jhelum, Greeks’ Hydaspes, is missing. And both the attempts are welcome entries in postcolonial histories. Simultaneously, it may not dupe us that the orientalist discourse regarding Alexander still needs further robust critical investigations. Here one novel assumption is offered.

Aitzaz Ahsan laments that Alexander as Sikandar is part of our socio-cultural landscape while the son of the soil, Porus, has been victim of historical amnesia. The loss may, no doubt, be great. However, deliberations to the level of meditation vis-à-vis historical events help us talk about various contingencies. So the question that Alexander, and not Porus (?), has been with us may find different answers. I would like to suggest that, among others, it was due to Persian cultural influence in this region. There might have been breaks in this Alexanderian memory; it was probably revived by the Persian literature, such as Shahnamah and Sikandarnamah, of Muslim Iran.

If this hypothesis holds ground, we may also assume that Persian literature has also done justice to Porus. Granted that, it may dispel the perception and irony that history has cheated us. Porus seems as alive with us as Sikandar has been. Pakhtun parents, perhaps, name their sons after Porus but in its Persian/Afghan version, e.g. Por/Pur+dil. Other classical Persian names prevalent in Pakhtun society include Suhrab, Rustam, Jamshed, Khursheed, Parvaiz, Afrasiab and so on. All these are, in one way or another, legendary names in Persian classical texts.

Poor or Foor is the Persian version of Porus (Greek). And Shahnamah remembers him in glowing words. He, according to this epic, faced Alexander bravely but was killed, a different version from the Greek one. He is mentioned as ‘the lord of India, favoured by the heavens, commander of the armies of Sind’. Porus retaliated to Alexander’s insulting letter demanding his submission and reminded him that the Greek king was devoid of shame. He opined, "The ancient kings of Iran never addressed us in this way. I am Foor, descended from the family of Foor, and we have never paid any attention to Caesars from the West." Shahnamah refers to him as the lion-like warrior having a body like a lion.

Such a description of Porus in Shahnamah seems to have deep imprint, though unconsciously, on the memory of inhabitants of what now constitute Pakistan. It is intriguing to correlate Foor or Poor, meaning brave or referring to Porus, to Purdil or Pordil (also pronounced as Pardul and Pordal). And this compound noun means brave-heart or the heart of F/Poor. It may be noted that in Pashto there is no use of ‘f’ and such a sound turns into ‘p’. If this proposition entails any vitality, we may be happy to have found that the king of Jhelum has also been favoured by Mnemosyne: that Porus like his Greek rival has also come down to us through Persian literature.