Beyond chalk and board

Skills for employment are imperative for inclusive and sustainable economic growth 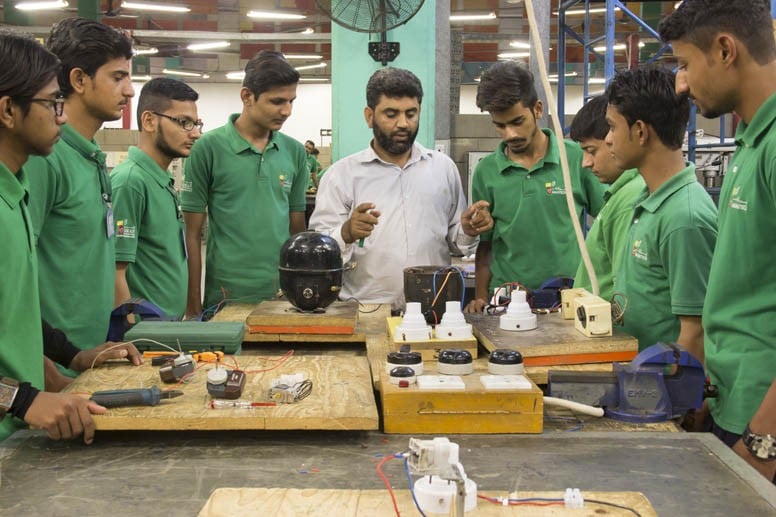 When Charles Allen Prosser (1871-1952), the father of vocational education in the United States and the architect of the 1917 Smith-Hughes Act, thought of improving the education of American children, he believed that schools should help students "to get a job, to hold it, and to advance to a better one." The Smith-Hughes National Vocational Education Act of 1917 is an expansion and modification of the 1914 Smith-Lever Act and both were based largely on a report and recommendation from Charles Allen Prosser’s Report of the National Commission on Aid to Vocational Education.

After the death of Stalin in 1953, the old idea of poly-technical education was revived, and the focus was put on preparing secondary-school students for specialised vocational work in industry or agriculture. In 1984, new reforms focused on the development of a new integrated secondary vocational-technical school that would overcome the traditional barriers between general and vocational education.

Similarly, in the USA, in the 1950s and ’60s, the concept of outcome-based education (OBE) model emerged. One of OBE’s first offspring was competency-based education (CBE), which was originally called "mastery-learning" or "criterion-referenced learning." According to Dr Robert W. Mendenhall, the President of Western Governors University, USA:

"The most important characteristic of competency-based education is that, it measures learning rather than time. Students progress by demonstrating their competence, which means they prove that they have mastered the knowledge and skills (called competencies) required for a particular course, regardless of how long it takes."

With a population of 184 million and an annual growth rate of 2.1 per cent, Pakistan is the sixth most populous country in the world. The 64 per cent of the country’s total population is aged between 18-30 years. According to statistics, working age population (15-49 years) will increase from 96 million (2010) to 180 million by 2050. Current statistics reveal that only 5 per cent of Pakistani youth have access to quality education which involves higher education at university level. Pakistan spends only 2.3 per cent of its GDP on education, making it the lowest in the region.

According to a press report less than 1 per cent students in Pakistan, against 16 per cent around the world, get technical training due to shortage of technical and vocational schools in the country.

According to a press report less than 1 per cent students in Pakistan, against 16 per cent around the world, get technical training due to shortage of technical and vocational schools in the country. Around 24 million children are out of school and one reason behind this is that every child does not have same aptitude of formal education while the country does not have enough technical and vocational schools.

Various models of education were tried over the years in Pakistan but lack of funds, absence of political will and inconsistent policies resulted in the failure of many good models. However, in recent years, competency based education has gained immense importance in the country. The government has initiated skill development programmes, under Technical and Vocational Education and Training (TVET) sector. The first ever TVET policy has also been approved by the federal cabinet in May 2018, which will go a long way in improving the quality of skill training in the country. At the moment there are approximately 3500 registered TVET institutes in the country, with a mere enrolment of 350,000 students whereas; annual demand of TVET graduates is above 950,000. Once the students complete their theory classes, they are sent in the industry for on-the-job-training (OJT).

A reform programme in this sector with the name of ‘TVET Sector Support Programme’ is also underway since 2011 in partnership with National Vocational and Technical Training Commission (NAVTTC) and Deutsche Gesellschaft für Internationale Zusammenarbeit (GIZ) GmbH, funded by the European Union and the governments of Germany and Norway. The programme in collaboration with NAVTTC is currently in its 2nd phase with achievements like development of TVET Policy and National Vocational Qualification Framework (NVQF).

Muhammad Munis Mahmood is one among many students, who took these courses by choice and has now emerged as a star in his field. After securing a diploma in Mechanical Engineering, Munis Mahmood was in the first ever batch of 35 students who were enrolled in Mechatronics at AmanTech in 2015.

"Mechatronics is a combination of mechanical, electrical and electronics but it is mainly related to automation of machines. Mechatronics is taught in all the countries of the world, except Pakistan, where it’s limited to a few private sector universities, as a 4-year bachelor programme but it is very expensive and not every student can afford to study it. Mechatronics was first started in Japan in 1979 then it came to the USA and then to Europe. Even in our neighbouring country, India, they have many courses related to automation industry," says Munis.

The course outline was designed in such a way that it included pneumatics, hydraulics, automation and PLC (programmable logic controller) programming with a year of theory.

After completion of the theory, Munis was sent to General Tyres Company. "It was quite surprising for me to see company employing 96-97 per cent of the modern technology, which I learnt at AmanTech." This is one of the major steps underway through reform process in TVET Sector, where private sector is encouraged to take lead and provide various opportunities of workplace-based-training, input in the indigenous curriculum and post qualification employment.

Only recently, Munis was awarded by AmanTech for securing 85.47 per cent, making him one of the 9 boys in Pakistan who are the international certificate holders of Siemens, Germany in Mechatronics.

After his internship, the company offered him a job of an Assistant Engineer of Electronics, but the lady luck had something better in store for him and he was hired as an Automation Engineer in another company Tecno Auto Glass, where he applied earlier.

Here again Munis got an opportunity to go with a team to Melbourne, Australia, in 2017 for six months.

"Our job was to study a plant, dismantle it and bring it to Pakistan. It is a unique (fully automated) plant completely run and operated by robots, and is the first of its kind that is going to be built at Port Qasim. It will manufacture glasses for front windscreen, back screen and windows and side doors, as a complete package of a car. Termed ‘Float Glass’, only three countries of the world export these glasses, vis-a-vis Malaysia, USA and Japan. In the 11-member team, Munis as an Automation Engineer, is responsible to fix any fault in the plant which works on the chain system and any fault at any stage can bring the whole plant at a halt."

While understanding the importance of academic degrees, Munis wants to do his BS in Mechatronics. "I did take admission in the BS programme, but due to my travelling I had to surrender it. Now I will continue it."

Comparing academic and technical education, Munis says, "Had I done my BS in Mechatronics, my theory part could have been very strong but for practical training I would have to start from scratch as an intern. But after doing my diploma, I had directly worked at the industry. Secondly, usually companies offer Assistant Engineers a sum of Rs35,000-40,000 at the max. But due to my field experience and OJT, my company pays me fairly well above this package and there are chances of promotion too."

Munis suggests a review of the current admission policies and modernisation of syllabus. "I am studying the same course which my father studied 30-35 years ago, with very little changes. Universities give admission to only those who secure 80-85 per cent, but those who achieve below 70 per cent, remain deprived. So these courses are especially good for those who are not financially stable, as TVET sector institutes offer courses free of cost. There are also bright chances that these students will get good job offers after the course. We need more such institutes," he says.

Dr Fahad Azeem, Head of Academic, AmanTech Foundation, also feels that vocational qualification which was compromised in the past, in Pakistan, has seen some significant breakthrough in the last ten years.

"The National Vocational Qualification Framework (NVQF), made a uniform vocational education policy throughout Pakistan. Its draft was presented in 2015 and its implementation has started since mid 2017.Under NVQF, a uniform curriculum was developed through the formation of STEVTA Skill Councils for every trade, represented by industry representatives from the relevant fields. All stakeholders, including national and international players and the industry representatives, gave their input about the type of human resource and the competencies required by the market in the future. The NAVTCC conveyed these demands to the technical institutes, who in turn developed curriculum under these recommendations. This curriculum became part of NVQF’s policy of uniform education throughout the country.

Azeem suggests that besides technical courses, other skills like English speaking skills, computer skills and the life skill education should also be imparted to students. "We are doing it at the AmanTech since its inception. Life skill training which equips students with skills like dressing and dining etiquettes, time management, stress management etc, gives them an edge over other students."

While endorsing the importance of vocational education, Azeem says that even students enrolled in degree programmes at various engineering universities also take short courses from any technical institute to acquire practical experience, which they lack at their universities. Similarly, students in suburban or peri-urban areas, where scale of school education is not of that standard, need technical skills to get employment.

Sustainable Goal No 8 calls for promoting sustained, inclusive and sustainable economic growth, full and productive employment, and decent work for all by 2030. This goal can only be achieved by devising right policies, which are in tune with the international market demands. Through TVET sector project, we can make considerable headway in this direction.

Beyond chalk and board