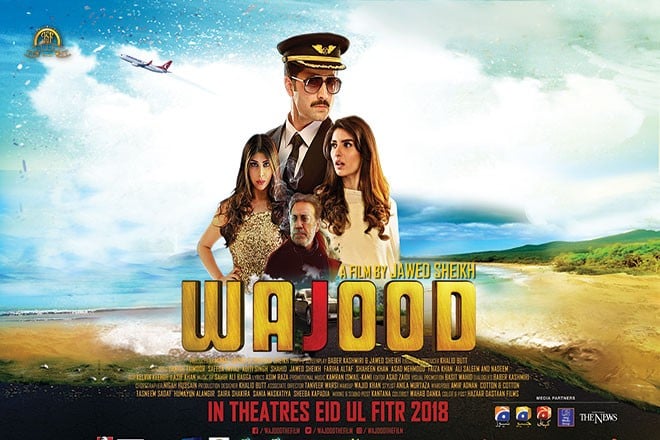 The government of Pakistan, in its mission to give four Pakistani films a chance to break the box office during the recent four-day Eid weekend, decided to delay releasing Bollywood films by one week. This meant no Salman Khan trying to pulling off a Dominic Toretto in Race 3 and devouring competition all on his own.

That said, this story is not about box office gains and losses but about the content of the four films that released during the Eid weekend and are presently running in cinemas (at least at the time this piece was being written.)

The good news is that the four films offered, at least in terms of genre, some variety. The bad news is that of the four, two films are worth discussing while the other two remind you that we are probably years away from the realization that a good film is first and foremost about the writing. Without a good script, nothing can salvage a film. So here then is a look at the movies, what they got right and what made us cringe.

Our story begins with 7 Din Mohabbat In, the third film from director(s) Meenu Gaur and Farjad Nabi. Featuring Mahira Khan, Sheheryar Munawar, Amna Ilyas, Jawed Sheikh, Aamir Qureshi, Hina Dilpazeer, Adnan Shah Tipu, Mira Sethi, Rimal Ali and Danish Maqsood, the movie is written by Faseeh Bari Khan and follows the story of an introverted, naïve, meek 29-year-old Tipu (Sheheryar Munawar). He encounters a Djinn (essayed by Jawed Sheikh) who resides in a bottle and who tells him that he will no longer be a loser if he manages to find true love in seven days. The kicker is if Tipu is not successful, the Djinn will make him his slave until the end of time.

In his life there is his cousin Neeli (Mahira Khan), a poetry-spouting, romantic at heart who is an orphan and lives with him and his mother, the domineering Hina Dilpazeer.

The idea that Tipu won’t be a loser if he is no longer single is skewed certainly but you move past it for many reasons. As his quest for true love begins, Tipu encounters a series of women including Ghazala (Amna Ilyas), an empowered female rights activist and the UK-returned Princess Sonu (Mira Sethi) and Neeli with whom he shares a close relationship from the start. Neeli, on the other hand, loves Tipu but is engaged to be married to Kankatta, the neighborhood bully, who has paid Neeli’s guardian a king’s ransom for her hand in marriage.

7 Din Mohabbat In gets many things right. The soundtrack, though not perfect, is elevated by the presence of Fareed Ayaz Qawwal and Brothers as well as Ali Sethi. Both Amna Ilyas and Mira Sethi nail their characters and you realize that this was perfect casting because they are so convincing.

Tipu’s best friend in the film is Tingu Master (Danish Maqsood) and though he is short-statured, he is not used for comic value but rather has a substantial role as a good friend.

Without getting preachy, 7 Din Mohabbat In sends out valuable messages. It stands up against forced marriage and recognizes that transgender people are as human as the rest of us. And as Mahira Khan’s character says in one scene, "we’re women, not corpses", it is a line that hits close to home. In another scene, Tipu notes, "Hitting a woman is not macho" and that’s a good message to send out in a time when violence against woman remains a very cruel reality.

The pop culture references, beginning from Salman Khan to Katrina Kaif to Fawad Khan are spot on. The comedic moments are plenty and in particular make a case for Mahira Khan who shines in many scenes and surprises you with her comedic timing.

The film is certainly not that flawed; it is just too long. And though it was promoted as Mahira Khan and Sheheryar Munawar’s film from the start, it really only belongs to Sheheryar who makes a strong case for his acting skills. As for Mahira Khan, who is co-starring with Sheheryar for a second time, she has outgrown such roles. The dreamy-eyed girl she portrays feels like a variation on her previous characters and at this point in her career, Mahira Khan needs to expand her resume and get past this screen image. The decision to do a light-role after Verna makes sense on paper but Mahira Khan should be playing roles that are closer to her age. It can still have romance or comedy.

The second film to release this Eid and one that drags us back to the old Lollywood days is Azaadi. Written and directed by Imran Malik and starring Moammar Rana, Nadeem, Sonya Hussyn, Aurangzeb, Erum Azeem, Mariam Ansari, Azaadi looks like a patriotic film but it does injustice to the term.

Moammar Rana stars as Azad, a freedom fighter in Indian-occupied Kashmir who has abandoned love, life, family to fight the cause. His father is essayed by Nadeem Baig, a former leader of the cause, who is living in shame because one soldier has sexually assaulted his daughter as a way of teaching him a lesson. The family lives in quiet pain until Sonya Hussyn, a British-Pakistani journalist comes to their home. Married to Azad, her reason for visiting is to get a divorce but upon arrival she sees the state of the household and goes on a mission to bring colour back to the lives of the family. From there, she meets Azad, and thus begins their own, absurd love story.

Making an agenda-based film is not a new notion, to us in Pakistan or Bollywood or Hollywood for that matter. Making a film on the very real humanitarian crisis in Kashmir also has merit. But this film makes a mockery of all those things. Azad’s freedom fighter is so over-the-top that he is unbelievable. In one scene he has a beard and is dressed in khakis and holding guns, fighting for the cause and in another he’s transported to a beach where he is sans beard and is trying to pass off for a twenty-year-old while the very serious journalist is dancing on the beach in heavy clothes you wear to someone’s wedding.

The camera work is bizarre in many spaces. The CGI is terrible. The Jihad for Kashmir mission that dictates the film comes off, first as a tragedy and ultimately a farce. Or to quote a line from The Newsroom: "A tightly produced abomination."

Whether this film makes money or not is irrelevant. It plays on hate and showcases zero nuance of what is happening in Kashmir but rather blows up the anti-India rhetoric to the sky by employing every single cliché in the book. It is not only unintelligent but an assault on your senses and the sentiment of the Kashmiri people. One can only hope that none of them see this.

As for acting, only Nadeem Baig and Sonya Hussyn deserve applause. Moammar Rana’s dialogue delivery is so exaggerated that he’s unbearable to watch. Also, watching a girl sleep at night by entering her room and staring is not a sign of endearing love but is downright creepy.

The third film on our list is Wajood, which marks the return of Jawed Sheikh to the director’s chair. He has also co-written the film alongside Babar Kashmiri.

The first half is dedicated to the hero (Danish Taimoor) pursuing the girl (Saeeda Imtiaz) and trying to win her heart, first by flirtation, then by following  (or mildly stalking as I like to call it) and finally through saving her life from a bunch of goons. They get married, life is bliss and then things take a turn for the worst. Enter Jessica (Aditi Singh) and the happily married couple has no clue what she has in store for them.

Wajood’s big flaw, apart from its writing, is that it feels like two separate films. But the fatal blow comes from the acting. While veterans like Nadeem Baig and Jawed Sheikh and the film’s hero Danish Taimoor can act, the rest of them simply cannot. It’s forced acting at most and it takes a lot away from the film. The songs don’t work, neither does the choreography. The one song, where Aditi Singh is dancing to an unmemorable number in her bid to seduce Taimoor, is laughable and horrifying. It’s the art of seduction gone awry. The social message, at least one that was identifiable, was pre-marital sex is bad and that is neither here nor there. All in all, it’s an incoherent production, a chaos of bad writing and bad acting that is rescued only by its outdoor cinematography that makes Pakistan and Turkey look as beautiful as they are.

The fourth and final film, Na Band Na Baraati, directed by Mahmood Akthar, and written by Harish Kumar Patel is the surprise package in this lot. Though not as heavily promoted as the other three films, it’s easy on the eyes, well-acted and takes the second spot quite easily.

Its chief protagonists are two brothers; the older essayed by Mikaal Zulfiqar (Shahid) and the younger by newcomer Shayan Khan (Zahid). The younger one, Zahid is dating a girl who is also the romantic interest of a mechanic essayed by Ali Kazmi. But the girl’s father has no intention of letting her settle down with the mechanic or her boyfriend. While her father declares that he will get her married off to someone, a romeo-esque Zahid roams the streets of Toronto and asks his brother, Shahid for help. Seeing him in such shape, Shahid agrees to help. But what does that help look like? And what does it mean for his love life and the girl of his dreams, Zoya.

Qavi Khan stars as the endearing father of the two brothers; he eats sugary things while being a diabetic and flirts with Atiqa Odho’s character every chance he gets.

Odho stars in a small but memorable role and her presence is felt every time she enters the frame. Mikaal Zulfiqar, caught in plenty of hilarious moments, looks good onscreen as the alpha male but if the film belongs to anyone, it is newcomer Shayan Khan. It isn’t that he has the best lines but it’s how he delivers them. Ali Kazmi’s whacked out mechanic is another delight. Again, good actors matter. Though not without flaws particularly since it uses the heroines as props for the men, Na Band Na Baraati rides on the coattails of strong acting.

*        Pakistani films expect you to suspend all logic far too often. Can we use some brain power please?

*        Editing. All directors must employ reason and shouldn’t expect their audience to watch movies that are over two hours long unless they are making a Lord of the Rings.

*        Music in films has to improve. Nearly all the films struggle with this problem except 7 Din Mohabbat In.

*        Can we please not have cousins falling in love? It is a reality but that doesn’t mean it should be promoted as the ideal.

*        Choreography matters. Since many of us in Pakistan have grown up on a healthy diet of Bollywood, we can recognize what bad choreography is and once again, many of these Eid films struggle with it. If you can’t do it right, maybe don’t do it?

*        Having men save women from criminals after which they fall in love is the oldest trope in the book. Can we please drop it now?