Eid or no eid

There are those -- chowkidaars, policemen, traffic wardens, porters as well as the (skeleton) staff at railway stations, duty doctors, hospital staff, and so on -- who have to spend the festive occasion ‘at work’ 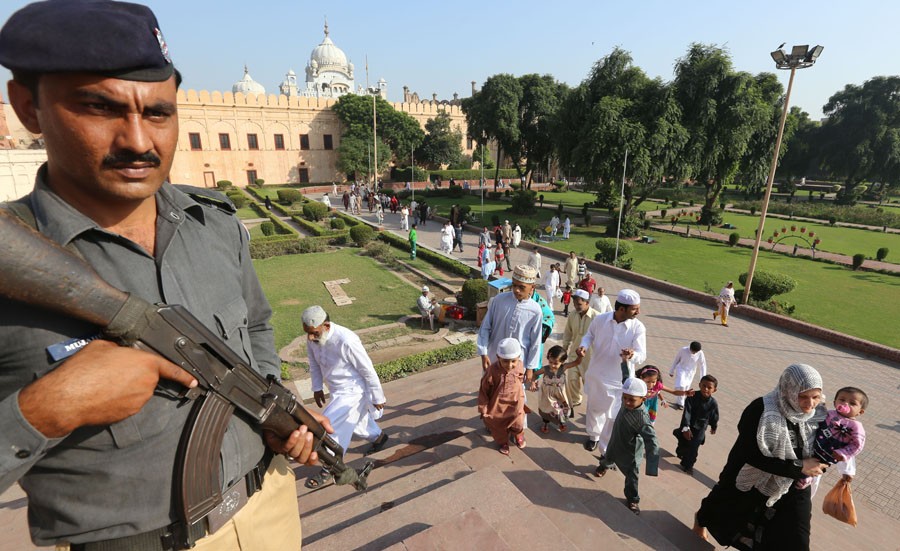 Throughout the holy month of Ramzan, the media was awash with messages extolling the virtues of maghfirat (forgiveness), sadqa (charity), and kaffara (atonement for your misdeeds). Alongside, you saw advertisement of various brands and places announcing promotions and discounts. Not the one to be left behind, even the Pakistan Railways offered free travel for senior citizens on their ‘eid-special’ trains from Karachi to Peshawar.

Living in a gated residential community, I asked the guard a couple of days ahead of eid if he would be going on leave. He said he had applied for it and would go only if it’s approved. This set me thinking about so many like him -- chowkidaars, policemen, traffic wardens, porters as well as the (skeleton) staff at railway stations, and even the duty doctors, hospital staff, and so on -- who have to work while the rest of the world enjoys their festival holidays.

So, on the first day of eid, I made it a point to move around the city and see how these people spend the auspicious occasion ‘at work.’

Beginning with the mosque near our home I saw four private guards and two policemen standing at the entrance, patting down the namazis as they entered the place. As the prayers started they huddled in a corner, sharing a smoke while keeping watch over the passersby. I went over to talk to them, and I was told, "Baji, namaz has started, and the ladies’ enclosure is full!"

I asked a guard how he felt being on duty while everyone else was offering eid prayers and shall soon be exchanging felicitations. He laughed, seemingly surprised at my query. A few steps away, a policeman with two stripes on his sleeve said, "Madam, after this [prayers in the mosque] we are due in a public park. So, it’s going to be a full day at work."

I asked if he missed being home amongst family members on the occasion. "Kya karen, duty bhi karni hai!" he said, with an obvious sense of wistfulness. But what he said next took me by surprise: "It hurts when people come out of the mosque, without even acknowledging our presence. We get no eid wishes or hugs, trust me!"

The private security guards seconded the policeman, and added that their entire (eid) day is spent "on our feet." One of them said, "It’s all so boring, I miss the noise and cheers of the children back home."

As we stood talking, I heard a thunderous noise in the background. I turned to look in the direction of the sound, and spotted a tiny airplane which had just taken off (from Allama Iqbal Airport Lahore). And my mind instantly drifted to the cabin crew as well as the pilots, even the staff on ground, the airport management, the parking staff, the security personnel, all of whom would be on duty on the very eid day.

Eid is traditionally about visiting your loved ones, and taking excursions with your family and folks to parks etc. Most parks have gates, with hedges and barbed wire, while some are walled. All the gates, parking areas, and roads once again are never left unmanned -- come rain or shine.

Eid is traditionally about visiting your loved ones, and taking excursions with your family and folks to parks etc. Most parks have gates, with hedges and barbed wire, while some are walled. All the gates, parking areas, and roads once again are never left unmanned -- come rain or shine, eid or no eid. Here, the story at the mosque was repeated. I even saw people misbehaving with the guards when they asked them to let their bags to be frisked.

In a large public park, I saw a lady police constable. I went up to her, only to find the same story: her kids were away in the village, while she and her husband, also a security guard, were doing their duty.

I also talked to the people who were enjoying their eid, and surprisingly none of them were thinking of those on various kinds of duty; most even said they were doing their due.

And, then there are duty doctors, the paramedical staff, ambulance drivers, personnel of the Rescue services, wireless and telephone operators, and so many more!

Next, I thought of visiting a government hospital. Just as I entered, I saw a journalist of a private tv channel giving a live beeper on the conditions of the hospitals on eid day. So, the media people, especially those related to electronic, must also be at work, I reminded myself.

A quick walk through the hospital showed me the wards were un-swept, and the staff was fiddling with their cell phones, while the patients’ attendants sat despondently waiting for a miracle to happen. A handful of doctors in the emergency ward were attending to the casualties. In other words, it was business as usual.

As I went about town, I saw push carts and donkey carts parked along the roadsides, the fruit vendors occasionally mopping the sweat off their sun-burnt faces. They had no holiday, again. Likewise for the small kiosks of ice cream, or even the large bakeries and sweets shops, who must be open on eid because these are the days the people buy sweetmeats in greater quantities.

My day ended at an Eid Festival at an Army Officers Mess. As the children frolicked around, and the officers and their wives mingled with other families, I saw one lady sitting by herself, and looking distressed. I was tempted to ask her if she’s fine. She told me she was there with her two kids, while her husband was away on duty at the borders. She had been married for five years, and in all these years, her husband could be home for four eids only.

"He calls me once a day. Mostly, we connect via letters."

"Letters? In this day and age?" I couldn’t help asking her.

"Jee, because he’s posted in Siachen!"

I couldn’t say another word.

Driving back home, I kept my eyes out -- for any stray janitor on the road, or rickshaw or bus drivers plying their vehicles as if it’s any other day of the week.

Eid or no eid