Women on a roll

Although the number of registered voters has increased, the real test is to translate it into turnout this time 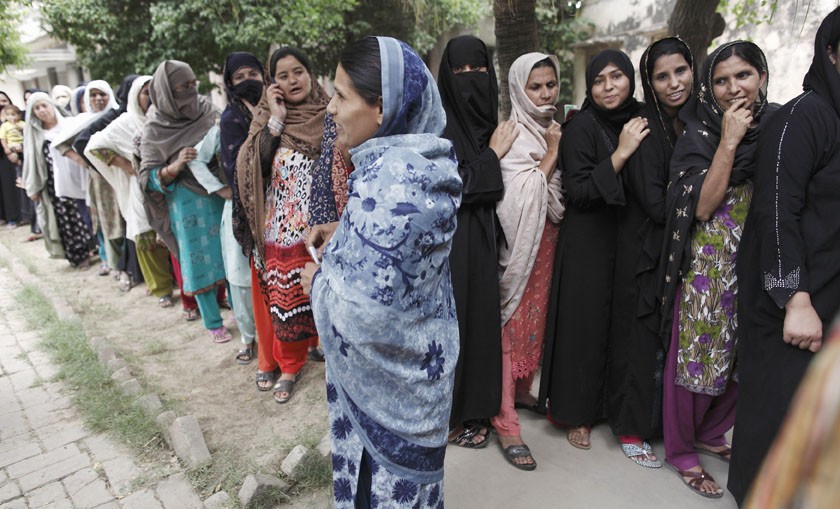 In general elections 2013 the number of registered votes was 86.18 million, including 48.50 million male and 37.59 million female voters. The official figures of the upcoming general elections are close to 106.5 million. According to the new rolls, 59.22m are male and 46.73m are females, with the gender gap between male and female rising to around 12.5m.

The ECP, last year, launched a special project to bridge the gap of over 12 million between male and female registered voters in the country, which in the new rolls has almost been achieved -- because of further increase in male voters. However, 9.1 million female voters have been added to the 2018 list, which the civil society groups view as quite encouraging.

In the new list there is increase of 11 million male voters and 9.1 million female voters. The addition in the registered women voters, which is considered a joint and consistent effort of the Election Commission of Pakistan and civil society organisations. Still they have not been able to fill the gap of male and female voters as per population. (Detailed report of sixth census is awaited to determine this gap).

"Though gap remains between male and female registered voters we see need for serious efforts to fill this gap," says Khawar Mumtaz, Chairperson of National Commission on the Status of Women (NCSW). "This is an ongoing process and will continue after the elections. The real test is whether this will translate into turnout. We anticipate good female turnout. For the first time the Returning Officers have been directed to prepare male and female turnout, separately."

In the last general elections, ECP did not prepare lists of male and female turnout because at many places there were combined polling stations so it was difficult to get an exact figure. "We will have a good picture this time. The key issue is how we engage women to feel compelled to vote. Gradually, we are moving forward and women are pushed to participate in democratic process and exercise their right to vote," she says.

In the past year, ECP had publicly emphasised the need for women voter registration and worked with civil society groups and political parties to address the daunting gender-gap on the electoral rolls ahead of general elections 2018. It implemented its unparalleled ‘Women NIC and Voter Registration Campaign Strategy’ which has significantly contributed to increase in women’s CNIC and voters’ registration, and also mobilised communities to continue enrollment even after the finalisation of the electoral rolls. It worked with NCSW, Trust for Democratic Education and Accountability (TDEA), and other organisations.

The Election Act 2017 takes further measures binding all political parties to give five per cent tickets to women in direct elections. Another law calls for re-election in a constituency if the female turnout is less than 10 per cent. This effort needs a multi-pronged strategy which begins with the issuance of CNIC and encouraging women to come out and vote.

"The real challenge is to bridge the gender gap shown in population figures to bring more and more women in the democratic process because we see big difference in a number of female registered voters and actual adult female population of the country," says political analyst Tahir Mehdi. He also thinks that new legal requirements will further help in focusing on women voters to capitalise electoral potential of female voters. "When there will be a high number of women voters and good turnout, candidates will pay attention to women voters next time."

Women on a roll