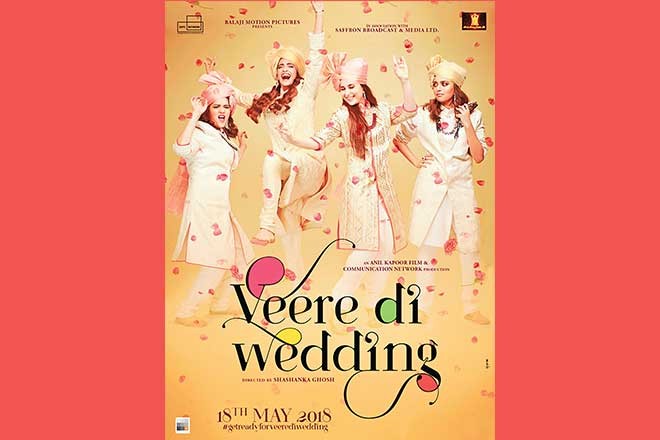 Attempting to look at life through the lens of complexities, the film provides an insight into the life of the four friends and how they deal with life, love, marriage and heartbreak in a world that is rapidly changing.

What makes Veere Di Wedding stand out in its relatively different outlook of things is that here the ensemble cast is shown standing by what they hold to be true and truly have the guts to live the life they want. Where on one hand there’s fearless abandon, conversation about sexual relations before marriage and the lack of it post marriage, there’s also an ongoing narrative of the nitty-gritty that often goes unheard. Where else have you seen a conversation about sexual freedom, the glass ceiling, and the taming of women by misogyny all in one film?

In that sense, Veere has managed to do things, which truly Bollywood hadn’t done or thought of before, especially not in mainstream cinema. Those of us who have seen Lipstick Under My Burkha know otherwise. So does its brazenness make VDW a film worth watching or supporting? Unfortunately not.

The true problem lies within the film’s representation of characters more than anything else. The fabulously dressed and styled, the rich and famous and yes, the Sex and the City vibe is what it does best, but in every frame, whether they’re partying, moping, introspecting or just having a good time, the characters fail to look believable. If anything, it makes one question the disparity in equity within the film. It seems like only rich girls get to do the talking about feminism. The rest? Well, who cares about them!

Doing away with the Bollywood glass ceiling, the ensemble cast does manage to usher in a new era of women-centric films in India, but, at the cost of letting go of traditions and cultural values the film industry has held so dear to it. You would have rarely seen such uninhibited women on screen before, and perhaps that’s why you might just want to watch Veere Di Wedding at least once even if it has its heart in a very confusing place and almost no soul at all.

While Deadpool may have left one confused between shedding a tear for the weirdest antihero there is or laughing at all his antics, Deadpool 2 has made sure we all know what we need to do - and that is to stop feeling bad for the maniacal Wade Wilson.

Taking off from where the story left us, we find Wilson (Ryan Reynolds) at a rare happy moment in his life with his fiancée (Morena Baccarin), as they plan to have a family. However, knowing how the superhero arc works, tragedy strikes the two, and we discover an extremely depressed Deadpool trying to find new purpose in his life.

As luck - and Deadpool’s dark ethos - would have it, he makes the most of the worse times in his life, and of course, turns his grief into a driving force towards starting his own superhero troupe - rivaling his love-hate brethren team, the X-Men.  Soon, Wade finds a family in a plethora of new characters - most plucked from the comics, and most an improvement on the first film’s fairly flat villains - and starts a new serpentine journey that is nothing less than two hours of pure-adrenaline and gut-busting laughter!

Introducing not just a new set of superheroes, whose bizarre bit of superpowers would leave you rolling, but also Cable (Josh Brolin) - a soldier from the future avenging the death of his daughter, the film reels the audience back into action mode just when you thought all the film offered was laughs.

That being said, one would still want to focus on the humour than the action in Deadpool 2 because truth be told, what Reynolds does best in this film, is leave you gasping for air with his comic timing than anything else. Yes, truly we’re not kidding when we say this is one of the funniest Marvel films you’ll see! Action? We’ve seen better. But because of its humour, Deadpool 2 is a film you wouldn’t want to miss!