Charity as an Islamic value

The book is an original, highly rigorous and well-informed piece of research on the interface of morality and economics -- something which happens rarely 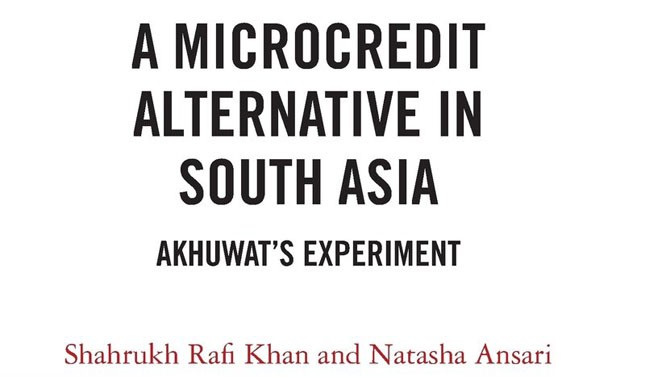 Mohammad Yunus’s Grameen Bank is so well known that when a layperson hears of microcredit it is the foremost example which comes to the mind. But Grameen is not the only experiment in this field nor, indeed, the most successful one. The problem is that most such initiatives remain poorly known because the media does not consider them newsworthy--an organisation to impoverish, exploit and hurt people deliberately and blatantly would, however, be newsworthy.

Shahrukh Rafi Khan and Natasha Ansari should, therefore, be thanked for having brought an organisation for microcredit, called Akhuwat, to our notice. Those who are aware of scholarly work on Pakistan know Dr Shahrukh Khan as a research scholar on the economy of Pakistan since the last four decades. He has written books History of Development Economics Thought (2014) and Market as Means Not Master: Towards New Developmentalism (2010).

This reviewer fondly remembers his doctoral thesis published as his first book entitled Profit and Loss Sharing: an Economic Analysis of an Islamic Financial System (1987) which was probably one of the few books written because the author sincerely believed such a system should be studied and analysed for its own sake rather than because General Ziaul Haq encouraged such studies. And the proof of his commitment to Islamic concepts of running the economy, if any is required, is this study in which Shahrukh uses the Islamic concept of voluntary philanthropy and brotherly help (akhuwat) as analytical concepts in this case study of lending-to-help people.

Just as Shahrukh went to study at the University of Michigan in 1976 because Professor Tom Weiskopf was on its faculty and he was an open minded and rigorous scholar, so Natasha Ansari came to Mount Holyoke College seeking guidance for her work on the Akhuwat from Shahrukh. Natasha has the sincerity of the Shahrukh of more than three decades ago and Shahrukh now has the open mindedness and rigour of Tom Weiskopf. Then both the guru and the disciple formed a two-member team to collaborate on this book. It is obviously a show of hardwork, commitment to the idea that moral principles may inform economic activities and the rigour which decades of social science research has produced in Shahrukh.

Akhuwat is a non-governmental organisation (NGO) formed in 2001. It is the brain child of talks between friends at the Lahore Gymkhana in that year in which one of them gave the seed money of Rs 10,000 (not a large sum at all) and another, Dr Amjad Saqib, contributed his time and effort to make it take off and flourish. By 2017 it had received 858.4 million in donations and the loan recovery rate was nearly 100 per cent while the operational cost is less than 10 per cent.

The main idea in Akhuwat is that charity is an Islamic value and so is helping people in need. One must give to society whatever one can whether in the form of money, goods or one’s time and labour. Thus people are encouraged to give donations which are announced in meetings which usually take place in mosques in order to give a religious touch to the activities of lending and borrowing. The workers of the organisation are often voluntary, and they give their time and labour to these activities. There are, however, paid employees also as there were (in 2017) 795 branches and 2,558 unit managers with 3,300 staff members.

Akhuwat gives loans of between Rs10,000 to Rs50, 000. These loans are free of interest thus satisfying people who, for religious reasons, do not approve of interest (understood as riba which is proscribed in Islam).

To what extent is the model successful? How do people respond to it? What are the problems? These are questions which the authors find out through sample surveys, covering 13 sites across the country and focus group discussions (FGDs). As expected the research design and sampling are carried out with rigour one has come to expect from Shahrukh Khan and his students. Each question is answered clearly and succinctly and the possible caveats and exceptions are pointed out and explained.

The sampling frame comprised 47,914 respondents from 253 branches. Out of these, 13 branches were selected and 1.5 per cent borrowers and ex-borrowers were selected from each branch. Thus the sample size was 458 respondents out of which 43 per cent were females and 57 per cent were males. Overall 267 people were interviewed. The FGDs were conducted with 29 male and female individuals.

While it would be tedious to read all the questions and responses if they were summed up here, it is necessary to give an outline of the findings in order to introduce the book and whet the reader’s appetite for reading it. One major finding is that most borrowers praise the idea and the conduct of the field staff. They mention that the field staff does not even accept water from them which is unusual in a society where public services, which are supposed to be free, are given by the field staff in exchange for food or money. The loans increased the family’s income and led to the alleviation of poverty at the grassroots level.

There were a few criticisms, however. One was that the loan was distributed in a mosque and men and women had to be present together to receive them. This was problematic in some deeply conservative pockets of the country where women do not like to expose themselves and men do not like to bring them to an open public space like a mosque. One of the most inexplicable restrictions was that a Christian group had to include a Muslim in their group to qualify for a loan.

The authors explain that this "could promote interfaith harmony" (p. 138). But they also add that "it placed the burden on Christians to find a Muslim to join their group" (p. 138). Moreover, the "very elderly" are also excluded which looks like ageism.

Then there is the condition that all loan agreements need to be signed by a household member in addition to the person receiving the loan. The survey indicates that 57 per cent of men and 69 per cent of women approve of this condition (p. 85). But 28 per cent of men and 21 per cent of women oppose it. Given the rigour of the authors’ research, it is not for me to point out that these cases need to be looked at more deeply. It is also not clear what subtle, unexpressed pressures are brought to bear on non-Muslims because of the obvious religiosity of the project and especially the disbursement in a mosque.

Indeed, the question whether the reinforcement of religiosity results in conceding more space to interpretations of preachers which marginalise women and non-Muslims has not been addressed. Perhaps it is too sensitive to be addressed anyway. Perhaps surveys will never bring out the real feelings of the people in matters which they consider delicate. But at least in the case of the Christian, or for that matter of any religious minority, it does seem fair to suggest that the inclusion of a Muslim in the group could reinforce the feeling of being subordinated to Muslims which is prevalent in Pakistani society anyway.

In my view the idea that it promotes inter-faith harmony is probably wishful thinking. These are aspects of research which require being a participant-observer in a community for a long period and thus an anthropological study of the same issues may well be required.

This observation is not meant to detract from the academic significance and excellence of the study. It is without doubt an original, highly rigorous and well-informed piece of research which is on the interface of morality and economics -- something which happens but rarely.

In the end, I would like to commend the authors for a useful addition to the scholarship on microcredit and on Islamic economics. The Akhuwat model is an inspiration for a society where philanthropy is common but there is a dearth of how to channel the process through a moral model endorsed both by our value system and culture.

The book is recommended as required reading not only for economists but for all those who are learning how to do social science quantitative research. It will remain a milestone for a long time.

Charity as an Islamic value