A Force to reckon with

Has the Dolphin Squad of Punjab police that was created with heavy investment and lofty aims, been able to achieve its objectives? 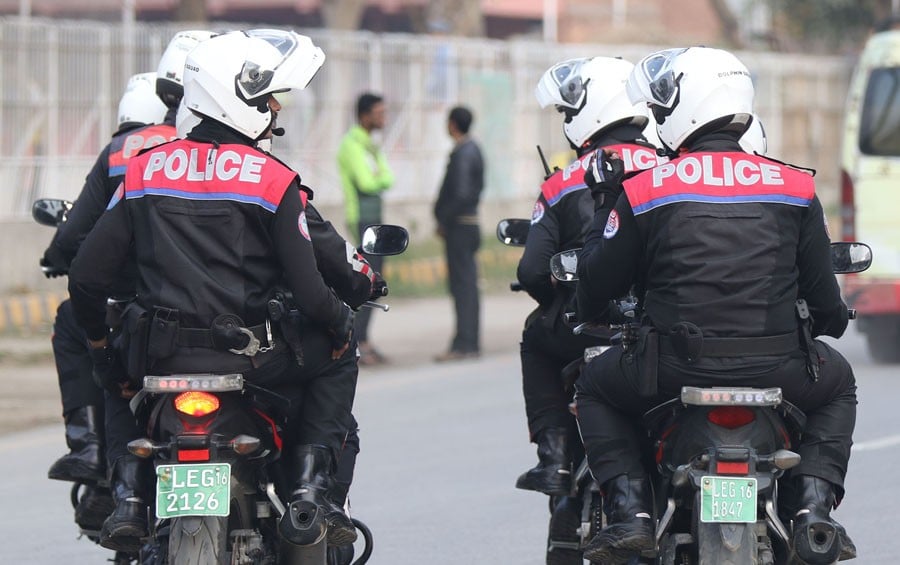 Driving along different roads in the city, you can’t miss the sight of uber-stylish two-wheelers whizzing past you every now and then. At times it appears they will hit you from behind, and you struggle to avoid an accident from happening.

The riders of these vehicles are police personnel clad in unique black and red uniform, with a touch of blue, and advanced gadgetry attached to it. They are armed with modern weapons such as 9mm Beretta pistols and MP5 guns that other mobile police units can only envy. Belonging to the Dolphin squad of Punjab police, these personnel have to move as a team of four on two Honda CBX 500 heavy motorbikes that cost Rs1.2 million each. The accessories cost another Rs0.15 million approximately.

The squad is supposed to patrol the streets and roads of Lahore round the clock, in shifts, to detect and fight street crime, react as first responders, and perform community work to improve the image of police and project it as a people-friendly force.

The Dolphin Squad was introduced in 2016 on the model of the Turkish police that inspired the former chief minister of Punjab, Mian Shahbaz Sharif, during one of his visits to Istanbul. He immediately decided to replicate the model, first in Lahore, and then in other parts of the province, regardless of how heavy it would cost.

The force is technology-based, and every move of every cop can be monitored from a central location. The declared objective is to create an efficient, transparent, and accountable police. The explanation that the concerned officials give for buying such costly motorbikes is that they work as deterrents for criminals, especially in the street. They say such criminals operate on motorbikes with far less engine power than that of the 500cc Dolphin Squad motorbikes and fear they can be easily chased and apprehended due to the top speeds they can attain.

There have been incidents where the bullets were fired from their weapons and missed the targets.

Today, as one observes, there is no dearth of resources available to the Dolphin Squad personnel who are entitled to an extra allowance of Rs10,000 a person per month, live in freshly built quarters, have state-of-the-art office buildings on Walton Road that house facilities such as a fitness gym.

Yet, despite all this, the perception of Dolphin Squad is generally not good among the citizens; many see it as just another ‘dream project’ of Shahbaz Sharif whose obsession with the Turkish model of governance is no secret. There are others who say members of the force misbehave with the public, as if every person going around was a criminal, and that they have nothing better to do than enjoy the heavy-bike rides.

There have been incidents where the bullets were fired from their weapons and missed the targets.

The question arises whether the force has been able to achieve what it was meant to? Or, is it just like the many mobile forces such as Elite Force, Mujahid Force, and Tiger Force that exist already? Besides, one wonders whether the huge cost of setting it up and the dependence on imports of costly vehicles can be justified, especially when the general public thinks it is not making a difference.

Ahmed Raza, a social worker based in northern Lahore, regularly deals with police on matters pertaining to people in distress. Talking about his experience with the Dolphin Squad, he says, "It shows up when you need it and also sets up pickets, but the bad part is that the attitude of the personnel is rather derogatory on many occasions."

He recalls how the squad members beat up a middle-aged, Hepatitis patient and his sons on Jail Road some time back, and how the video of the incident went viral on the internet. A more recent incident in which a 14 years old boy was accidentally killed in Shahdara when a bullet was fired by the squad at a bunch of alleged criminals in a car.

Earlier, in September 2016, a squad official was arrested on an attempt-to-murder charge after he shot at a suspected drug dealer but the bullet missed the target and hit a seven-year-old girl who mercifully survived.

Shehzad Rafique, Deputy Superintendant of Police (DSP), Dolphin Squad agrees there is "the perception issue," and explains they are trying to help it and remove the distance between the citizens and the force. For example, the "Dolphin personnel spotted standing at some points on the roads do it as per the Standard Operating Procedures (SOPs) of the force," he says. "They ought not to be blamed for negligence. Those who think they are running away from their duty are not aware of this fact."

Under the said SOPs, the squad must patrol for 40 minutes in every one hour, and stop at designated points for the remaining 20 minutes. The reason for this pause is that riding a heavy bike puts stress on your posture and going without a break can be harmful.

Interestingly, even their ‘stops’ are said to be at places that are crime hotspots. This way they act as deterrents also. "In the event of a distress call, the squad is supposed to get working instantly."

Rafique says the movement of the squad personnel is monitored through the trackers installed in their motorbikes, and the details of every person or vehicle that was stopped and checked is entered in the system through an application installed in their smartphones. "No violation of discipline is tolerated. Every complaint by the aggrieved public is paid heed to.

"Two years ago, some Dolphin Force personnel were found guilty of taking bribes, and dismissed from service. Till date their status is the same," he adds.

According to Rafique, the heavy motorbike purchased for Dolphin Squad is far less expensive than the 1200cc BMW heavy motorbike used by the Istanbul police that costs Rs4.5 million.

He reveals that spare parts and accessories have already been purchased in quantities that should be sufficient for at least three years. "Though there was some delay in repair and replacement of parts including the motorbike tyres, it was only because of the time-consuming procedure of tenders."

Under the head of community policing, the "services provided were clearing of blocked traffic, helping people cross road, lost and found child, lost and found goods, help in road accidents and in cases of vehicle breakdowns, way guiding and so on. Each and every incident was recorded and the number of community services totalled 46,574."

A Force to reckon with