Rasool Bux Palijo an astute politician, an avid reader, a prolific writer and a fine intellectual from Sindh, is no more 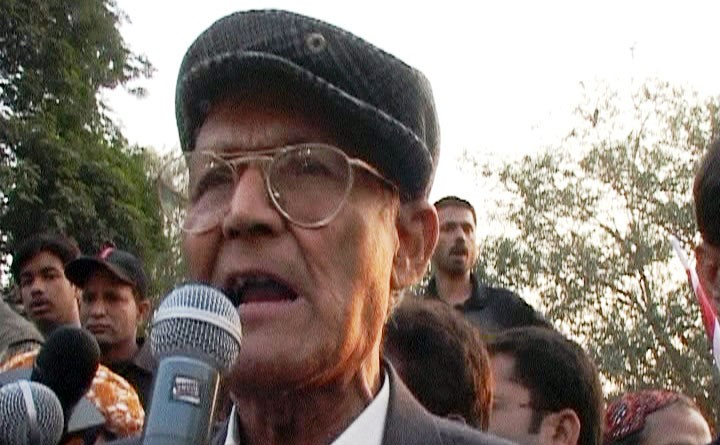 The history of people’s struggle is not known to many in Pakistan. The young generation often ignores it partly due to the absence of archival record. Socio-political movements and individuals have played an important role since long, in the undivided India; yet it is largely ignored not only by court historians, colonial apologists but also by the revolutionaries.

It is however difficult to not take notice of people who left a legacy in the form of writings and followers. That is why it is hard to ignore Rasool Bux Palijo (1930-2018) who passed away last week (June 7) in Karachi at the age of 88 but will live on through his struggle, following and dozens of books in his mother-tongue, Sindhi.

Though his death did not get much attention in the mainstream media, even his opponents were forced to praise him. It is time to translate his books into English and other Pakistani languages since many of us are unaware of his struggle.

Two stars of anti-Zia struggle, Jam Saqi and Rasool Bux Palijo, died this year. They were both from Sindhi middle classes and tried their best to bridge the gap between nationalism and communism. Both failed to attract the masses of Sindh to their brand of politics.

As a student, young Palijo worked with Muslim Students Federation (MSF), took part in the Pakistan Movement and remained an advocate of Lahore Resolution passed at Minto Park (now Iqbal Park) in March 1940. He often criticised the Pakistani establishment for betraying the spirit of Lahore Resolution. Like Mian Iftikharuddin, Huseyn Shaheed Suhrawardy, Sheikh Rasheed (Baba-e-Socialism) and Abdullah Malik, he was among those progressives who rejected the Congress narrative against the creation of Pakistan.

His love for landless peasants started in early 1950s when he joined the legendary hari leader Hyder Bux Jatoi of Larkana. Sindh Hari Committee was founded by G.M. Syed in the 1930s yet its anti-feudal colour emerged in mid-1940s when Jatoi took charge of it, after resigning from the post of deputy collector in 1945. He was not only a leader but also a writer and poet. He translated the Quran into English. Young Palijo learnt a lot from Hyder, the hari politics, G.M. Syed and Sindhi Adabi Sangat.

When Syed formed Bazam-e-Sufia-e-Sindh, Palijo worked with him as secretary. As Syed was among the major power players of Sindh, young Palijo could not survive his comradeship for long and departed. "Syed had relations with waderas (feudals) and always took vital decisions without even informing his comrades so I departed,’’ said Palijo in an interview with me for Awami Jamhoori Forum in 2004.

Sindhi Hari Committee merged in the National Awami Party (NAP) in 1957. The party was an alliance of landlord nationalists and communists, and had less interest in hari politics. It largely affected those progressives who had believed in class struggle and worked for the rights of downtrodden. Finally, people like Afzal Bangash, Major Ishaq and Palijo had to form their own parties and work for the rights of landless peasants in then NWFP, Punjab and Sindh. Of all the three, Palijo’s party proved a non-starter in many ways.

Palijo formed his own party in late 1960s and called it Awami Tehreek (AT), People’s movement or Lok Lhar. "We did not call it Sindhi Awami Tehreek because we wanted to work in the whole country including Punjab. But Sindh was our starting point. I am not a nationalist at all,’’ said Palijo in the same interview.

At the time when Palijo and many leftists were forming their own parties or groups, Pakistan People’s Party (PPP) was being founded in Lahore and Zulfikar Ali Bhutto (ZAB) had emerged as the sole spokesman of West Pakistan. Bhutto was a Sindhi and many leftists had joined him in Sindh and Punjab too. "Bhutto invited me to join PPP but I had refused," Palijo said in the interview.

Palijo wrote a book in Sindhi What Happened in Bengal against Bhutto’s role in the East Pakistan crisis and sided with his old party NAP (Wali). Unfortunate events like language riots and Landhi labour killings in 1972 further expanded the gulf between ZAB and progressives, especially in Sindh and the Punjab. NAP’s (Wali) role in this phase is questionable. It shows that in the early 1970s, progressives and nationalists failed to reconcile with the first people’s government in Pakistan and it strengthened rightist, extremist and religious fundamentalists largely. This gulf enabled the establishment to reduce civil space in general.

Many nationalists and communists, including Palijo, did not even hesitate to join Pakistan National Alliance (PNA), a movement against ZAB whose main slogan was Nizam-e-Mustafa (Imposition of Islamic Code in Pakistan). Were they afraid of the immense popularity of ZAB? Interestingly, after the hanging of ZAB, they all, including Palijo, joined hands with the same PPP in fighting Gen. Zia’s dictatorship in the Movement for the Restoration of Democracy (MRD).

In Awami Tehreek, Palijo was lucky enough to have the support of a vibrant Sindhi leader, Fazal Rahu, from Badin who helped Palijo develop a mass organisation, especially in Thatta and Badin districts, with its base in Hyderabad during the 1970s. Rahu was elected a Basic Democracy (BD) member in 1962 and later in 1965 worked as chairman union council Taraai. Rahu and Saeen Alam Shah were the backbone of AT. During the Zia period, when Palijo was in jail, both Rahu and Shah worked hard in MRD along with many unknown workers in Sindh. Palijo was in Kot Lakhpat jail while his family remained at Professor Azizuddin Ahmad’s home at Lahore who was head of a leftist faction known as Professors’ Group.

It is to be remembered that MRD movement was very strong in interior Sindh and Punjab. Thanks to a controlled print media, it was often portrayed as concentrated in Sindh alone. Later, it was proven the establishment wanted to limit PPP in Sindh. It failed terribly when Benazir Bhutto landed in Lahore on April 10, 1986 and Lahoris gave her a historic reception. Alas, that agenda was fulfilled after the killing of BB.

After his release from jail, in mid-1980s, Palijo visited the US where he stayed with Shafqat Khan in New York who was associated with Pakistan Committee for Democracy and Justice. That committee was formed after the execution of ZAB and included many intellectuals living in the US and Europe including Eqbal Ahmad, Feroz Ahmad, Zulfiqar Gilani (brother of Iftikhar Gilani) and many more. "Palijo inspired us a lot because he was the only politician who did tangible work for women,’’ said Shafqat Khan after Palijo’s death.

During the Zia era, many anti-women laws under the banner of ‘Islamisation’ were made by the state. In those dark times, Awami Tehreek’s women wing, Sindhiani Tehreek, was a ray of hope in the land of pure. No wonder women were in the forefront at Palijo’s funeral. Many people shared the video clips of mixed gathering at the funeral after Asma Jahangir’s funeral in Lahore. If Lahore and Thatta-led women can come together, things can change dramatically.

In 1986, Palijo along with Professors’ Group joined the newly formed Awami National Party (ANP) headed by Khan Abdul Wali Khan with Sardar Shaukat Ali as secretary general. Palijo became its second secretary general the next year. Unfortunately, Fazal Rahu was killed on January 17, 1987 and it broke the spirit of Palijo, personally as well as politically. Palijo participated in the 1988 elections and got 9,813 votes from NA-182. He lost to PPP’s candidate Ghulam Husain Babu who got over 53,000 votes. If he were not in ANP, he might have got PPP’s support -- but it wasn’t meant to be.

By 1990, when Wali Khan joined IJI, Palijo and his comrades had left ANP. He fought in the 1990 elections as well but the fate was the same. Basically he failed to attract the Sindhis. This made him bitter. I interviewed him in 2004 and he told us that he had met Pervez Musharraf thrice. There was nothing common between him and the dictator. Later, he acknowledged that Musharraf was a liar.

It is a fact that in its early period MQM was not with Musharraf and Jamaat-e-Islami was his partner in Karachi. It too is a fact that many politicians including Palijo and many NGOs registered their support in initial years. Opposition of popular parties and support for unconstitutional rules is among the fatal acts of nationalist, progressive and civil society groups that have damaged the movements for social justice from within. This attitude is still prevalent in many ways even today.

No doubt, Palijo was an avid reader, a prolific writer and a fine intellectual who inspired Sindhi middle classes. Luckily, we have his writings with us. But these are mostly in Sindhi and without translation one cannot expand the debate of Sindh. Palijo had great respect for Punjabi sufi poets like Bulleh Shah and Madhu Lal Husain as well as others like Maulana Rumi and Shah Abdul Latif Bhittai. In many ways, he was much different from traditional Sindhi nationalists. You may disagree with his politics and life choices (he was a much married man), but if you want to initiate a dialogue with Sindhis it is important to read Palijo’s writings.