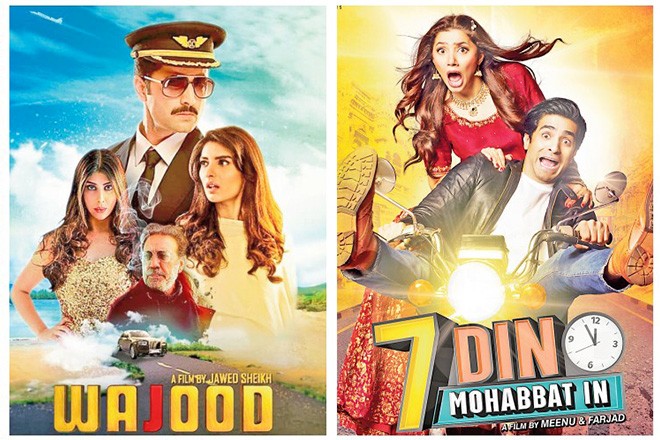 Just like every year, Eid ul Fitr is bringing potential hits from local and international film markets for movie-goers that can never get enough. As many as six films, including four Pakistani and two from Hollywood (Jurassic Park: Fallen Kingdom and Ocean’s 8) will hit the screens after Ramadan, promising to lure the crowds in. Anyone in his right mind would wonder as to why local filmmakers have released as many as four films together but all these producers believe that their film will draw the crowds and the rest will fail. To ensure this, the government even assisted them by delaying the release of Salman Khan’s Race 3 in Pakistan; the schedule was proverbially cleared out for Pakistani films to get a better chance at the box office. But will that tactic work?

Highlights: A patriotic film with a love angle, Azaadi may appeal to the audience for its nationalistic feel. The story is centered on Indian Occupied Kashmir and is shot by Ben Jasper, who was also cinematographer on the Bollywood flick Bang Bang. Azaadi also features the popular Sonya Hussyn in her first film as a leading lady.

Lowlights: The multiplex audience isn’t interested in national slogans and the film is ideal for single screen cinemas, which are becoming extinct. Moreover, Moammar Rana hasn’t delivered a hit since Bhai Log and director Imran Malik is making a comeback after a decade, so we don’t know what to expect.

Expectations: Moammar Rana still commands respect in Punjab, which provides 75% of the revenue at the box office. His popularity rivals that of Indian superstars in these areas and no sight can be better for this audience than of Momi carrying a gun and killing Indian soldiers at will. Obviously, the Kashmir sentiment will come into play as we will be seeing Nadeem sahib in a powerful role after a long time.

Lowlights: Shayan Khan as second lead, Mahmood Akhtar’s first film as a director and a setting literally alien to Pakistanis.

Expectations: Despite the presence of two international stars – Mikaal Zulfiqar and Ali Kazmi – this film is easily the weakest in the group of Eid releases. It was expected to be released one week after Sanju but some very intelligent person (note: sarcasm) asked the producers to take the other three films head on. Although the film has Qavi Khan, Atiqa Odho, Mahmood Akhtar and Azra Mohyeddin, it is the focus on Shayan Khan, which might prove to be the reason why the film may fail. Not only does he come across as a bad actor but the trailer features him above everyone’s favourite Mikaal or Ali Kazmi. One hopes his performance in the film is better than what we see in the trailer.

Lowlights: The possibility of ghosts in the plot, Rimal Ali’s item song, borrowed title from a Bollywood film, comparison with Zinda Bhaag.

Expectations: Meenu-Farjad’s contribution to Pakistani cinema may not be as strong as Nabeel-Fizza or Nadeem Baig (the director) but they came up with Zinda Bhaag that helped Pakistani cinema find its feet in the international market. The film seems to be a mix between fairy tale Cinderella and Hollywood classic Bedazzled, where the super sexy Elizabeth Hurley used Brendan Fraser for her ulterior motives. The plot does seem childish but with Faseeh Bari Khan, you can’t expect mediocrity. Add Mahira Khan, Amna Ilyas and Mira Sethi to the fore with one hero and you are likely to get a film that appeals to mass audience. This will probably be everyone’s first choice of film to watch.

Lowlights: Jawed Sheikh’s last film Khulay Aasman Ke Neechay had all the above-mentioned ingredients but it flopped; Aditi Singh’s dances remind you of the 90s, Ali Saleem acting in a film, old-school choreography, no Amjad Bobby to support the director.

Expectations: This is Jawed Sheikh’s eighth film as a director and the first to be released on Eid. He wanted to have it released in January but delays didn’t let that happen. The film seems to have elements of romance, action, suspense and mystery to it, with Jawed Sheikh’s character outshining all in the trailer. With two new heroines and Danish Taimoor, the film will do well if it survives the first three days of Eid. Remember, it was Jawed Sheikh’s Yeh Dil Aap Ka Huwa that was responsible for changing the way films were being made in Pakistan. He can do it again!