Beo Zafar, who played the no-filter wife and mother in Cake and is soon appearing in 7 Din Mohabbat In, speaks of spreading laughs, healing souls and doing only what interests her 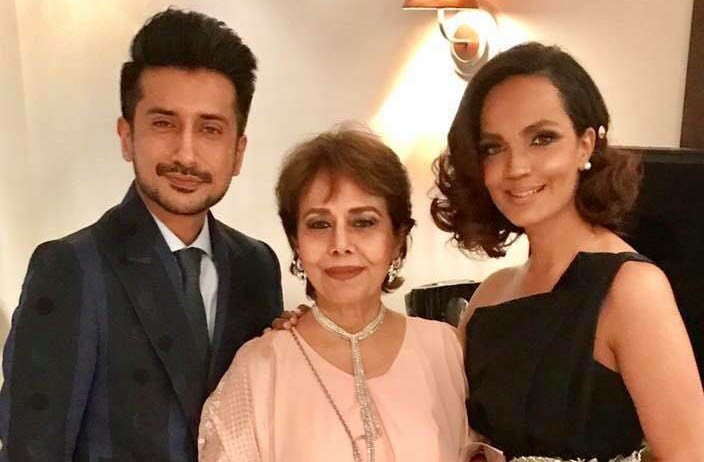 In a world full of people running after money, fame and all things material, Beo Zafar, who lives in London, follows a unique path that has shaped her beautiful journey, both personal and professional. An actor, author, stand-up comedian, businesswoman and above all a healer, she is not someone who always likes to be in the limelight but whenever the spotlight falls on her, the experience is worth remembering. The most recent example of this is her film Cake, directed by Asim Abbasi, and released earlier this year in Pakistan and beyond.

In Cake, Zafar plays the role of an elderly mother, one half of an old couple madly in love. In a rather serious film that revolves around the issues of a discrete family, she adds colour and wit with her large presence and no-filter commentary. She, as Habiba, is so dominant a figure in the family that every hell breaks loose after her death in the movie.

"A lot of families have such dominating mothers," she said while speaking to TNS in an exclusive telephonic interview from London. "You can’t stereotype a mother; she is also a human being. It was important to embrace her individuality as well and Asim [Abbasi] was very good at it. He gave me complete creative freedom to play the character and I added a lot of masala to it. Cake wasa very realistic film with no frills, I really enjoyed being a part of it. It was a unique production, mainly because they synchronised the pre-production so beautifully that there were no blunders on the set. The shoot ended on time, within budget and, most importantly, everybody was paid on time."

Speaking of how the film presented the sweet romance of an old couple, essayed by her and Mohammad Ahmad, Zafar added, "It’s very beautiful and encouraging for young people to see an older couple still having romance in their lives in a very sweet way."

Having moved to London (where she hails from) five years ago, Beo Zafar is a freelancer who has a lot of interests, with stand-up comedy being her main forte and something she has been associated with for long. She informed TNS that she has done several shows for charity fundraisers in USA, as well as in Pakistan in the past, and currently performs to audiences in London. Another major task she is presently engaged with in London is counselling of disturbed people, those who are in trouble, unwell or patients recovering from a mental illness.

"My life is that of a healer, the life of a woman who feels happy in other people’s happiness and it is not so much about me," Zafar said. "I think the whole thing is about being content and I’m content with what I’m doing. Standup comedy is the loneliest profession; you have nothing but yourself. When I step on the stage, in front of a strange audience, it’s a beautiful feeling to see so many smiles at the end of the show. It’s a reward for what I do. Comedians are healers; making someone laugh, making them feel better, reducing their stress is also a form of healing."

In the meantime, Zafar also wrote a book called The Dreamer Awakes (2008), which comprises poems by her and paintings by Tabina Chinoy, while she worked sporadically for films and TV. Starting off with television in England with a show called Here And Now, followed by her marriage that brought her to Pakistan, Zafar made a comeback with a local, comedy TV show called Bar Bar Beo. Some of her works include drama serials Maya and Ladies Park while she also appeared in films like Dua, Good Morning Karachi and the most recent Cake. She is also part of Farjad Nabi and Meenu Gaur’s upcoming romantic comedy 7 Din Mohabbat In that stars Mahira Khan and Sheheryar Munawar in lead roles and is scheduled to release this Eid-ul-Fitr.

"I am playing the role of Mira Sethi’s dadi in the film," Zafar informed. "It’s like a crazy, Punjabi dadi character. It’s a very small role but it’s a funny one."

Reflecting on her career and the path she has followed, Zafar maintained, "It’s not my age to make a career of doing films. Whatever comes my way, I do it happily. I choose the things I do carefully. Because at this age, there is no energy to be doing things you know your heart is not in. So I do what my heart is in and it has been in everything that I have ever done. I believe ambition has a cost; it takes away your peace of mind if you fervently wish to achieve everything, or to be on top. Huge success comes with a price. I have never had huge success but whatever I’ve done has been successful."

Towards the end of the interview, we spoke about sexual harassment and women, especially in Pakistan, breaking silence on the subject. "It’s not just about women for me, to be honest, it’s about human beings -- women, children and the weak," she observed.

"I think whoever has been wronged should speak up. But there is a price attached to that so you should come forward only if you’re strong and courageous enough to pay that price. If a woman from a village makes a similar claim, the feudal will destroy her entire family. These women around us, who have been vocal about their experiences, are really brave. More power to them! But it’s the job of our leaders to make a law across the land and lend support to the victims," she concluded.