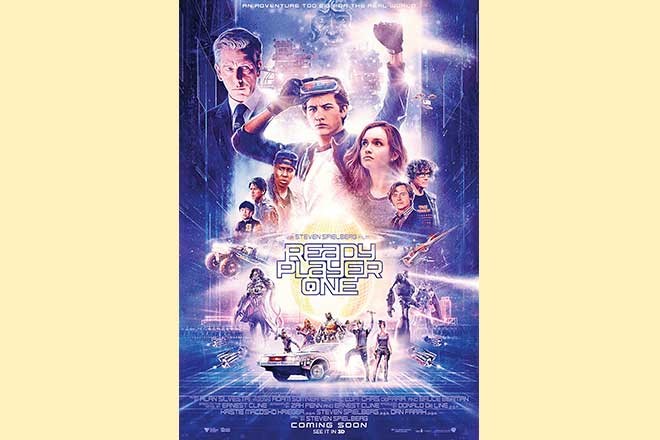 It’s 2045 and in a dystopian world, the general populace finds solace from the harsh realities that surround them by escaping into a massive online virtual reality MMORPG (Massively multiplayer online role-playing game) called the OASIS. When the games creator, the eccentric James Halliday (Mark Rylance) dies, he sets up a contest set in the OASIS itself, the winner of which inherits Halliday’s entire wealth and the control of the game as well. Practically the whole world is participating in this contest, including young Wade Watts (Tye Sheridan). Can Wade - with the help of a few online friends – solve the clues, overcome multiple odds and dangerous opponents, and win the contest?

Based on Ernest Cline’s novel of the same name, Ready Player One has Steven Spielberg going back to the arena of big screen summer blockbusters (a genre he practically invented). And the veteran director does manage to elevate the source material beyond its numerous references to ‘80s pop culture. There’s a terrific racing sequence near the beginning of the movie which ends with King Kong tearing up an entire cityscape, for instance. But soon repetition sets in and the larger message (reality is best, because, you know, it’s real) while timely enough (as it is, all of us spend too much time online already) is too simplistically delivered and without much conviction either. After all, the whole movie is set in the world of virtual reality and realised with state-of-the-art CGI.

Cut to chase: Has something pertinent to say but is too simplistic.

Based on a Gujarati stage play by Soumya Joshi (who also did the screenplay), 102 Not Out starts out interestingly (and amusingly) enough with energetic centenarian (102 to be exact) Dattatrey Vakharia (Amitabh Bachchan) threatening to throw his 75-year-old son Babulal Vakharia (Rishi Kapoor) out of the family home. You see, the senior Vakharia thinks his curmudgeonly offspring (who is also close to being a hypochondriac) to be a drag on his ambition of reaching the world record of being the oldest living human being. So Babulal has to either do exactly what his father says or out he goes. It’s an intriguing twist on the usual formula of children having to deal with aging parents and a few bits do elicit some good laughs. However, leaving aside the fact that this is a fairly sanitised (and simplistic) look at the issue of aging, much more could have been done with the basic premise. The movie also never really escapes its stage origins and there is some ham-fisted plucking of the heartstrings at the end. Still, the two veteran actors manage to hold your interest with Bachchan thankfully avoiding completely falling off the cliff of overacting (the edge of which he often skirts) and Kapoor effectively essaying his character’s reawakening.

Cut to chase: Not really a deep look into aging but has enough to keep you watching.