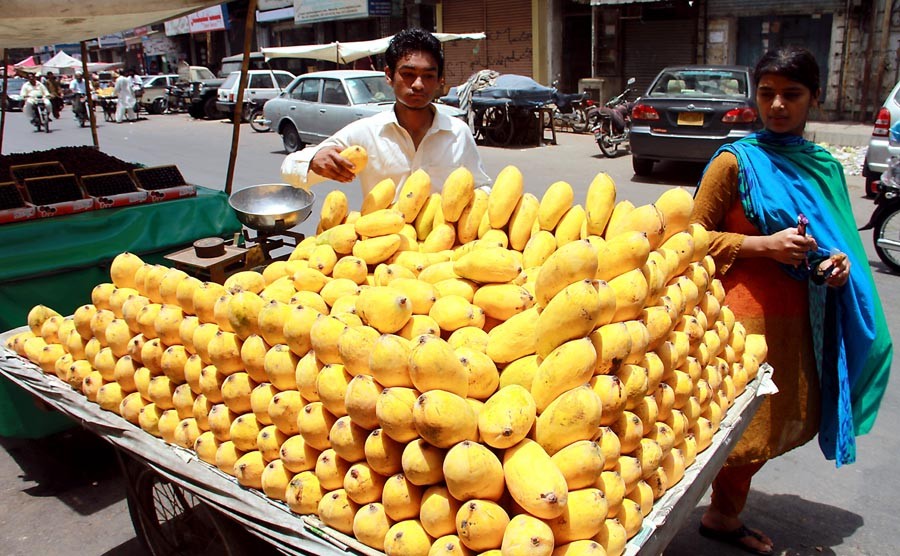 Mango, termed the king of fruits, is Pakistan’s most popular fruit item known all over the world for its succulent sweetness and unique taste. It is grown in different parts of the country but most of the crop comes from Southern Punjab and Interior Sindh. The fruit is also seen as a gift of summers -- its harvest time -- as it makes the harsh season seem less unpleasant due to its majestic presence. Every year people wait anxiously for the arrival of new mango crop, and once it is there consume it to their heart’s content.

No doubt the rapid urban development and mushroom growth of housing societies have eaten up vast tracts of lands meant for mango orchards in cities like Multan. But despite this trend there has been a gradual increase in the total area used for mango cultivation in the country. If on one hand the mango growers are losing land to real estate development, they are now trying to dedicate more agricultural land for mango crop and to make up for this loss.

The farmers are compelled to do this because the demand for mango is rising in the country by the day. The number of consumers is rising with the increase in population, industrialists are using its pulp more frequently for production of juices etc or producing products with mango as an ingredient in dried form, exporters are looking for new markets and so on. Pakistan produces around 200 varieties of mango and the most liked ones are Dosehri, Anwar Ratol, Chaunsa, Sindhri and Fajri.

In this scenario, the news that the country is facing around 35 per cent shortage in mango production is too damaging. The situation last year was not much different and there was a shortfall then as well. The main reasons cited for this crop failure are acute shortage of water required for irrigation purposes and the erratic weather patterns caused by global warming. When there was the need for watering of mango orchards four times during the season, it was done once or hardly twice in many areas. Punjab and Sindh suffered the most because both the provinces got less than their due share of water. With the existing dams experiencing persistent fall in their water level and new reservoirs not coming up over years, there was general scarcity of water for agricultural purposes.

Regarding the adverse effects of global warming, one finds the unfavourable weather conditions made things worse, especially in Punjab. Here there were prolonged winters at a time when the temperature should have been around 32 degree to help mangos ripen. The impact has been huge because around 70 per cent production of mango comes from Punjab. There are other reasons as well including pest attacks and diseases.

While the unfavourable conditions have hit mango production, these have also resulted in smaller size and deformed shape of mangos, especially the varieties mean for export. This factor is likely to hit exports.

This alarming situation calls for formulation of an action plan to tackle the situation and save mango crop from similar destruction in years to follow. It is also to be seen whether we are totally helpless against the forces of nature and perennial shortage or there can be any contingency measures in the context. The shortage and low quality of the produce also hits mango exports as 6 to 7 per cent of it is sent abroad. This makes the issue more serious to be handled without delay.

Waheed Ahmed, Patron-in-Chief, All Pakistan Fruit and Vegetables Exporters, Importers and Merchants’ Association (PVFA) and Vice President, Federation of Pakistan Chambers of Commerce and Industry (FPCCI) points out that mango crop has been suffering for the last four years and the reasons are almost the same. He says there seems to be no respite in near future because water crisis is going to worsen with time as the outgoing government did not do much to build reservoirs. He is also seeing the target of 1.8 million tonnes of mango crop being missed by a big margin.

Ahmed agrees growers cannot do much to reverse the negative effect of weather but adds research can be carried out to introduce weather-resistant varieties and revolutionise agriculture. He cites the example of some countries where there are plans to introduce indoor agriculture in order to minimise the effects of global warming. Crops grown in controlled conditions are less vulnerable to these factors. Ahmed shares that during the last year the wholesale mango price skyrocketed to an all-time high of Rs8000 per 40 kg or Rs200 per kg at one time. "The reasons simply were the shortfall in crop yield as well as fall in quality."

Another suggestion coming from his side is that Pakistani growers must plant small trees with height between 7 feet to 9 feet which give more output than the old trees that have grown to the height of 40 feet to 50 feet. This is important because trees become less productive and more vulnerable to disease. What happens in advanced countries is that growers plant small trees next to the big ones and get fruit from it once they mature. The older ones are removed from there.

While the unfavourable conditions have hit mango production, these have also resulted in smaller size and deformed shape of mangos, especially the varieties mean for export. This factor is likely to hit exports because there is no compromise on quality on part of the importers. Last year, the country missed the export target of 100,000 tonnes and could export only 81,000 tonnes.

Just like prolonged winters, higher than required temperatures also have a negative effect on crop yields. In context of mangos, excessive exposure to heat results in appearance of spots on their skin and they may suffer from a disorder called spongy tissue. What happens is that mango dries out from inside. It looks perfectly ripe from outside but is damaged from insides.

Ishtiaq Rajwana, Provost, Nawaz Sharif Agricultural University, Multan, explains flowering on mango tree starts when the temperature is around 25 C and the fruit flourishes with gradual increase in temperature. If during this time the temperature falls below this figure the flower is destroyed and so the fruit. This happened this year multiple times.

Rajwana is not sure about the shortfall figure and puts it between 20 per cent and 30 per cent. His point is that the exact figure will be worked out during the statistical survey conducted this year. He is also of the opinion that there is no quick fix available to avoid losses caused by global warming but suggests agricultural research can help growers go for adaptation. He suggests studies into climatic physiology of different mango varieties and planting of these according to their suitability to certain conditions.

Rajwana recommends judicious use of water and its conservation through techniques like drip irrigation. An initiative, he says, was launched by the government in which drip irrigation systems were provided to growers at highly subsidised rates but there was no post-sales service, replacement mechanism or quality control by the companies. The desired results could not be achieved though there was enough potential to save water this way, he concludes.