While getting Indo-Pak spymasters to sit together and flirt with each other’s narrative is as ambitious as it is sensationalist, The Spy Chronicles is by all means an Indian project 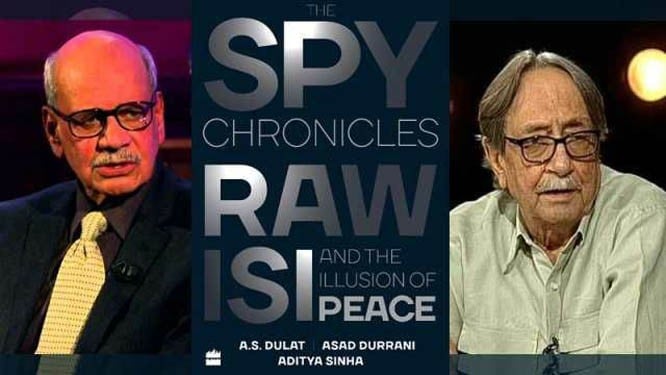 What better marketing for any book than its author being put on the Exit Control List (ECL)? To paraphrase an old adage, if you really want people to go out and read a book, ban it.

For Lieutenant-General (R) Asad Durrani and The Spy Chronicles: RAW, ISI and the Illusion of Peace, it hasn’t quite come to that. This is primarily because in the age of WhatsApp and pdf files, you really cannot practically ban anything.

What you can do thence is slash labels along the likes of ‘anti-Pakistan’, and trigger buzz words like ‘national interest’ and ‘foreign agenda’. This is not only to discredit the work by riming it in controversy, but also to taboo it such that even those that can easily access the e-book consume it along with the outlawed baggage.

That the book has come out days after former prime minister Nawaz Sharif’s comments on the Mumbai attacks, has of course decorated the stage with fire and knives.

Even so, what is unfortunate amidst the circus surrounding the book is that there really aren’t any juicy revelations. Let alone slipping out any state secrets, there’s nary a fact or idea that hasn’t already been floated elsewhere. The hoopla surrounding the book owes its entirety to the former designations of two of the three coauthors.

Although, to be fair to both Lt Gen Asad Durrani and Amarjit Singh Dulat, their unique experiences as heads of ISI and RAW provide a lot of insightful fodder as to the running of these spy agencies, and how they view each other, and themselves -- and how it is in contrast to the narratives that they vie to sell elsewhere.

This includes anecdotes on when the two agencies have actually collaborated in the past; how RAW actually saved former military dictator Pervez Musharraf’s life in 2004, for instance.

But sandwiched between these insights are superfluous pleasantries that suggest that the book is a well thought out project to go for precisely what it has achieved thus far: cashing in on the feathers that have been ruffled out of proportion by the trigger happy media on either side of the Indo-Pak divide.

A S Dulat, for example, can’t stop expressing his infatuation with the ISI.

Keeping in line with the book’s theme of either side fueling the counter narrative for consumption across the LoC it is Dulat who says that "Akhand Bharat is a crazy, impractical idea."

"I was once asked by a TV channel in Karachi what I thought of the ISI. I said, ISI is great, I would have loved to have been the DG ISI!"

And the former RAW chief gives conclusive proof on why ISI is great.

"As for the ISI, it’s a great organisation, otherwise it wouldn’t get named every day in India. Whatever goes wrong in India is attributed to the ISI. It’s very effective, whether you call it the Deep State or the State within the State. It is by far the most exciting of the intelligence agencies."

It is little surprise then that Dulat -- already accused by the hawks of ‘selling out to Pakistan’, with his Kashmir -- The Vajpayee Years mired in controversy for its confession of the Indian state’s role behind the volatility in Kashmir -- has been accused of ‘peddling the Pakistani narrative’ through his coauthored release.

In our neck of the woods, however, it is the ‘anti-Pakistan narrative’ that Lt Gen Durrani has peddled that is making all the headlines.

Among these are the claims that Musharraf initiated Kargil War without getting the Nawaz Sharif government on board. Durrani also downplays Indian involvement in Balochistan and believes RAW spy Kulbhushan Jadhav will be returned to India but put ‘around the neck of a civilian government’.

There of course are six entire chapters dedicated to Kashmir -- designed clearly as the book’s major selling point outside all the sensationalism -- with both Durrani and Dulat endorsing the cross-border allegations against their states.

While the former RAW chief has already dedicated an entire book to criticise Indian brutalities in Kashmir, the former ISI chief admitted to his agency’s involvement in fuelling militant separatism.

"Kashmir is still one of our more affluent states. You don’t see many beggars in Srinagar. Most Kashmiris own a house. They eat good gosht, few eat beef; only the rural folk can’t afford mutton so eat beef."

This nonchalant overlapping of Kashmir and beef by a former RAW chief is an example of why Dulat is at the receiving end of all the heat.

For the ISI chief, the most ‘controversial’ claim that he has made in the book is regarding former al-Qaeda chief Osama bin Laden.

"The ISI probably learnt about OBL and he was handed over to the United States according to a mutually agreed process… The denial of any role [by Pakistan] was because cooperating with the United States to eliminate a person regarded by many in Pakistan as a "hero" could have embarrassed the government."

Of course the irony here is that Lt. Gen. Durrani is facing backlash from the GHQ for claiming that the Army actually had matters under control, as opposed to the official state narrative that peddles the country’s most power institution’s ignorance and/or incompetence.

Even so, while all these claims have been thoroughly dissected in the local media, there are few that have yet to be dug out.

First, the assertion that there was intel about the 2014 APS massacre.

Read also: A boon for historians

"The Peshawar school incident… was a nasty one. The intelligence agencies had been warned that a big place would be hit, but which one of the hundreds? The Special Branch would have noticed unusual activity at the APS (Army Public School), which was on the watchlist, and increased security."

Second, Durrani’s flirtations with the idea of Akhand Bharat.

"Akhand Bharat isn’t a fantasy that nowadays some are thinking. Enough used to say M.A. Jinnah’s uncompromising objective was not Pakistan…. the division of India was not inevitable."

Keeping in line with the book’s theme of either side fueling the counter narrative for consumption across the LoC it is Dulat who says that "Akhand Bharat is a crazy, impractical idea."

While getting Indo-Pak spymasters to sit together and flirt with each other’s narrative is as ambitious as it is sensationalist, The Spy Chronicles is by all means an Indian project -- and not in the conspiracy theorist agenda sense.

If nothing else, Lt Gen Durrani referring to Azad Kashmir -- at least in the transcript -- as POK, the acronym for Pakistan Occupied Kashmir is a clincher.

Throughout the reading and setting of the book, the entire authoring triangle is perfectly aware of what The Spy Chronicles would eventually turn out to be. As insulting as it would be to his intellect, it does however appear that Lt Gen Durrani didn’t quite realise what he was getting into, as underscored by the following conversation.

"Aditya Sinha: How does the ISI see these interactions you’ve been having with Mr Dulat? Does it see RAW as sinister?

Asad Durrani: No one has ever talked to me on this subject, but going by my past experience -- in that whatever I said or wrote, never once was I cautioned -- all my institutions, civil or military, must have had enough confidence in my ability to hold my own."

Well clearly General Saab, they no longer do, if they ever did at all.