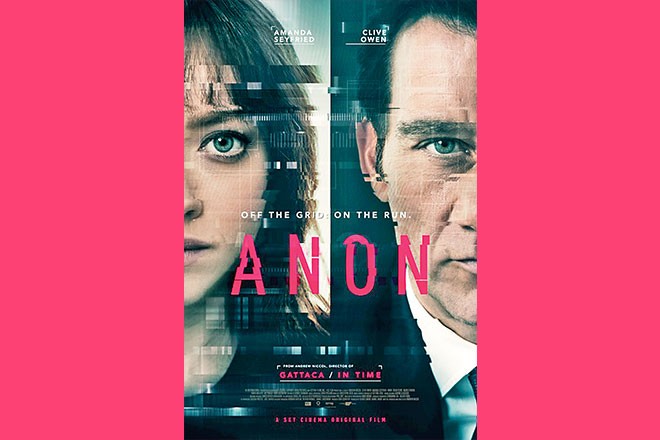 In a near-future world where everyone’s life is recorded and uploaded into the "ether", crime is almost non-existent because almost all events can be retrieved and replayed instantly on demand. There’s nowhere to hide. But now detective Sal Frieland (Clive Owen) has to solve a series of murders where recorded events are being deleted and altered and the murderer is hacking into the victims’ brains so there is footage of the killer’s face. The likeliest suspect is an expert hacker, a woman (Amanda Seyfried) who has wiped her digital existence entirely and hence she’s completely anonymous. So Sal sets out to entrap her. But is she the one laying the trap?

Written and directed by Andrew Nicol (Gattaca, In Time) Anon reminded me of certain science-fiction novels like Alfred Bester’s The Demolished Man where you have an impossible mystery wrapped around a futuristic setting. The movie also comes at an appropriate time when we’re grappling with questions of privacy in this digital internet age. However, Anon never quite becomes as clever (the plotting is a little too convenient and the resolution too unsatisfactorily swift) and intriguing as Bester’s novel or as its initial set-up suggests. It also doesn’t do enough to fully explore the issues it raises of privacy, identity and memory. This is a Netflix original and available on the streaming service.

Cut to chase: Interesting and pertinent futuristic concept but not as clever as it could have been.

When We First Met **

Noah (Adam Devine) has the best romantic evening of his life when he runs into Avery (Alexandra Daddario) at a Halloween party but finds himself relegated to the friend zone at the end of it. Three years later he’s attending her engagement party to Ethan (Robbie Amell) and wondering what went wrong that fateful evening. Now he has the chance - thanks to a magic photo-booth – to go back in time and make sure that he ends up with the girl of his dreams. But things don’t go quite the way he expects them to.

This rom-com variation on Groundhog Day has an appealing cast - including Shelley Hennig as Carrie, Avery’s best friend and room-mate - and it’s not entirely predictable. However, it also never quite delivers on the romantic front nor does it provide enough laughs (there are a few but not too frequent). I suppose you could watch it if you have time to kill before iftari. When We First Met is an original Netflix film and is available on the streaming service.

Cut to chase: Appealing cast but this rom-com has neither enough romance nor sufficient laughs.