Exactly fifty years ago was this year that represented the climax of the many trends of the decade -- revolt against the established order, individualism, sexual and political rights and dreams of a brave new world radically different from the old 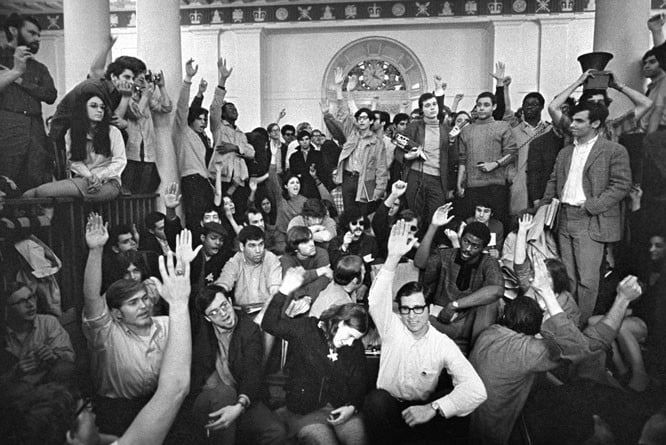 Though the decade of the 1960s is associated with rebellion, subversion, political and social radicalism as a whole, the year 1968 occupies a special place in it. 1968 was the peak year in which all radicalising energies unleashed in the previous years came to a boil. In fact, so much is the hold of one year that it is commemorated and revived after every decade.

As this year marks the 50th anniversary of the 1968 revolution, there has been a plethora of articles and books on the contribution of the year to today’s social, political and creative advancement.

In fact, so many events happened in one year that Richard Vine’s new book is titled The Long ’68: Radical Protest and its Enemies. The year was marked by student protest and workers strikes in France, Poland, USA, Germany, UK and Czechoslovakia. There were also political agitations and reverberations of the 1968 as far afield as Mexico, Pakistan and many other parts of the globe.

1968 also threw up a new layer of student radicals who came to play an outsized role in the subsequent history of their countries. Tariq Ali, Daniel Cohn-Bandit, Rudi Dutschke immediately come to mind. Paris saw the biggest student revolt against the established order. At one time, it seemed the government of De Gaulle in France was on the point of collapse. The protesting students were joined by workers who staged the biggest workers’ strike in Paris. London, too, saw massive demonstrations in Grosvenor Square against the Vietnam War. One of the organisers was a Pakistani student, Tariq Ali, whose name is indelibly liked to the 1968 worldwide student unrest. He also authored the Street Fighting Years based on his protesting and organising experiences in the cause of worldwide revolution.

Germany also experienced students protest on a scale not seen before; Rudi led the protest heroically. What was happening in Berlin also affected the course of student agitation in Poland. Though Poland’s student revolt is not discussed much in many account of the 1968, the country saw student protest on campuses and in the street. The fire was lit by a ban on the staging of the play Forefathers’ Eve, by the national poet Adam Mickiewicz. The revolt spread across Poland with students protestors swelling.

In Prague, the population rose up again the communist government and the Prague spring of 1968 was born. Milan Kundera’s Unbearable Lightness of Being captures some part of the action surrounding events of the Prague Spring. The US experienced by far the largest and most sustained political upheavals on the back of the US invasion of Vietnam and the long-simmering black-led movement for civil and political rights. The protests drew in widely divergent social groups catalysing wider social and political unrest. Martin Luther King Jr, the leader of the black civil rights movement led from the front, with the movement gaining in strength and depth, and spawning radical black group such as Black Panther movement in its wake. The latter was to inspire many groups agitating for ethnic minority rights in Europe.

Broadly speaking, the long term impact of 1968 was evidenced in political protest and the profusion of rock & roll music, and sexual and political rights. The Beatles were the defining group of the time.

More importantly, there were lasting liberating and animating ideas associated with 1968. In many ways, 1968 represented the climax of many trends of the 1960s -- revolt against the established order, individualism, sexual and political rights, and dreams of a brave new world radically different from the old.

The ripple effect was not limited to Europe alone. The protest in Mexico and other parts of the world were part of a global wave touched off by 1968.

There was also a counter revolution side to the uprising of 1968. Martin Luther King Jr was assassinated. Robert F Kennedy was assassinated in June 1968. The counter revolution streak triumphed with the election of Richard Nixon, a conservative politician, as president in the US. In Germany, Rudi survived an assassination attempt which restricted his participation in the movement besides affecting his long term health.

The Prague Spring proved a short-lived experiment when the Russian tanks rolled into Prague. The promise of liberation was dead in its track. In France, Charles De Gaulle called a general election and won handsomely only to resign a year later. In Britain, nativist’s reaction led to the now infamous speech Rivers of Blood by the conservative politician Enoch Powell. The speech stirred racial hatred and was denounced across all political spectrums at the time. The speech was a coded attack on the increasing level of migration into the UK and voiced nativist’s exaggerated and crude fears of being overwhelmed by aliens. The resonance of the speech continues to this day.

Tariq Ali, the famous author and campaigner on the Left, remains an iconic figure from that generation .Tariq Ali was at the head of student protests against the Vietnam War in Britain. His influence was far and wide in Pakistan too. He was looked upon as a transformational figure in Pakistan. Zulfikar Ali Bhutto reportedly feared that his global reputation may result in votes for him in Pakistan undermining Bhutto’s own political ambitions. That is why Bhutto kept him away from the country. Tariq also contends that the event of 1968 had their impact on Pakistan.