The 200 years old Haveli Naunihal Singh, also dubbed as the crowning glory of Lahore during the Sikh reign, is slowly crumbling, and succumbing to wear and tear. Does anyone care? 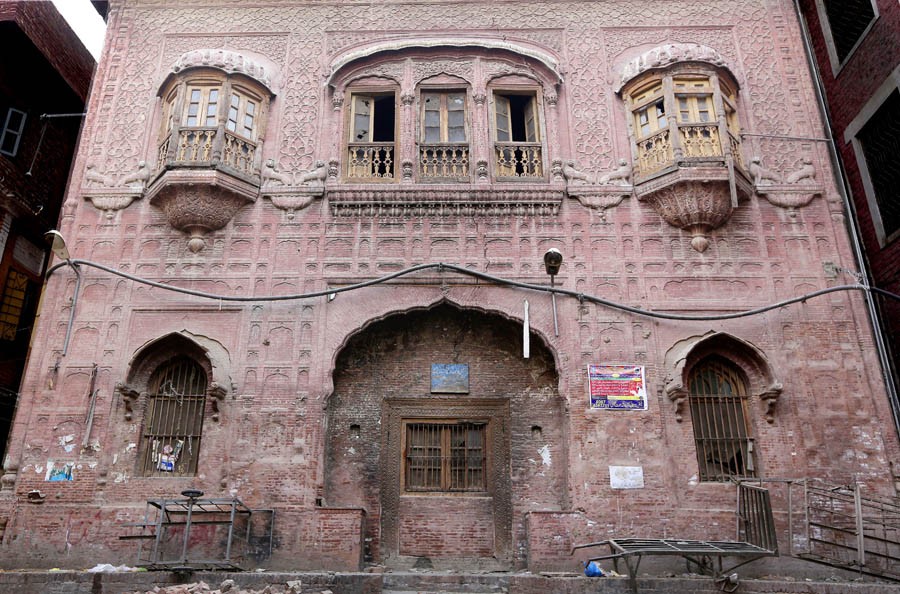 Lahore boasts a chequered history. For centuries, it attracted trade caravans, plundering hordes, and conquerors, seeking wealth and power. Consequently, the city was ruled by Hindu kings, Mughal emperors, Sikh monarchs, and the British, affording it the status of a land of legends. Nothing could describe the grandeur and magnificence of this historical city better than the proverbial saying that made rounds during the Mughals’ rule: (Translation) "Isfahan and Shiraz together would not equal half of Lahore!"

Every era brought with it its own unique concept of cityscape. Whereas Lahore is known more for the Mughal architecture, very little is known about the Sikhs who ruled the land for a good four decades. During their rule, which is also known as the "Lahore Darbar," a few architectural additions were made to the city. One of these is Haveli Naunihal Singh, nestled inside the cramped Mori Gate, in the Walled City of Lahore.

The haveli was amongst the last residences of the Sikh Empire (1799-1849). Sadly, the line of houses leading to the building, which once boasted the finest tradition of masonry, has been defaced by the several multi-storey buildings that have come up in its vicinity. The 200-year-old haveli is slowly crumbling, and succumbing to wear and tear. Its gate, wooden doors, carved ceiling beams, window shutters, marble columns, carved stone brackets, columns, and other indiscernible items, all present a picture of neglect.

However, the grand, four-storey haveli, also dubbed as the crowning glory of Lahore during the reign of the Sikhs, still catches the eye with its magnificent façade which is ornamented with colourful fenestrations of beautiful jharokas.

The history of the haveli, like its current state, is shrouded in mystery. According to some accounts, it was built by Maharaja Ranjit Singh for his grandson Naunihal Singh as the latter’s private residence, away from the Lahore Fort -- the seat of power from where the Lahore Darbar was run.

Another account says it was built by Maharaja Karak Singh (Naunihal’s father). Yet another account describes Naunihal Singh as the mind behind the construction of this piece of marvel. But all these accounts have one thing in common: no one knows as to when exactly did work begin on the haveli.

The prized land that once encircled the haveli in the form of a decorative garden has long fallen prey to the greed of private land owners and vicissitudes of history.

The haveli was amongst the last residences of the Sikh Empire (1799-1849). Sadly, the line of houses leading to the building, which once boasted the finest tradition of masonry, has been defaced by the several multi-storey buildings that have come up in its vicinity.

The extensive haveli, built in a rectangular shape, originally had around 40 rooms, various halls, and ornate balconies, which have survived the upheavals of time till date. Today, the haveli serves as a high school for girls with space for 1,500 students in its vast and airy rooms.

Much of its structure has been modernised, plastered, and painted over in stark whites from the inside, complementing the colour of government schools in the area. The rooms which once housed one of the most famous occupants of the Sikh empire are now crammed with benches and tables, the walls which were once privy to the words of the royal have been plastered white with blackboards hung up in the middle; the once lavish floors now produce a creaky sound as you walk upon it; the inner courtyard where there was the original embellishments of the Sikh era has vanished and is used as an assembly area for students.

After the fall of the Lahore Darbar and the city of Lahore going to the British, the once famed haveli came under the control of the Raj, and was later converted into the first public school for girls in the province, Victoria School for Girls, a primary level facility that still serves.

Unlike many other havelis of the Walled City which have been converted into schools, one special quarter of the Haveli Naunihal Singh has been locked away and preserved.

The most important and striking feature of the haveli, the Sheesh Mahal or the Rung Mahal, is a wonder of artistic achievement. The wooden roof is richly decorated, divided into several geometrical compartments, each fitted with a small mirror in the centre. The northern and western walls have fenestration in the form of windows and ventilators. This highly ornamental room with frescoes, mosaics, and decorative niches painted is a phenomenal example of the era gone by when Sikh craftsmen excelled in this kind of masonry. The paintings are amongst the very few examples of Kangra style painting, a form of art which flourished during the time of the Lahore Darbar.

The city of Lahore has a kaleidoscope of jewels like this Haveli in its heart. The rich history encapsulated by these heritage structures is closely associated with the identity of the city. Given its elaborate superfluities and wonderful architecture, structures like Haveli Naunilhal Singh highlight represent one of the most outstanding facets of the multi-faceted society that once was representative of Lahore. The public engagement with these heritage sites has to be important enough and responsible tourism is one of the important ways that should be taken up to ensure public access to these places. The sun may have set on the Lahore Darbar, like many other empires that ruled Lahore, but through these relics of the past the city can boast of a heritage comparable to any other in the region.