As politicking around creation of Seraiki province ignites a new public debate and activism, the Seraiki youth and intelligentsia hold a unique rally in Multan 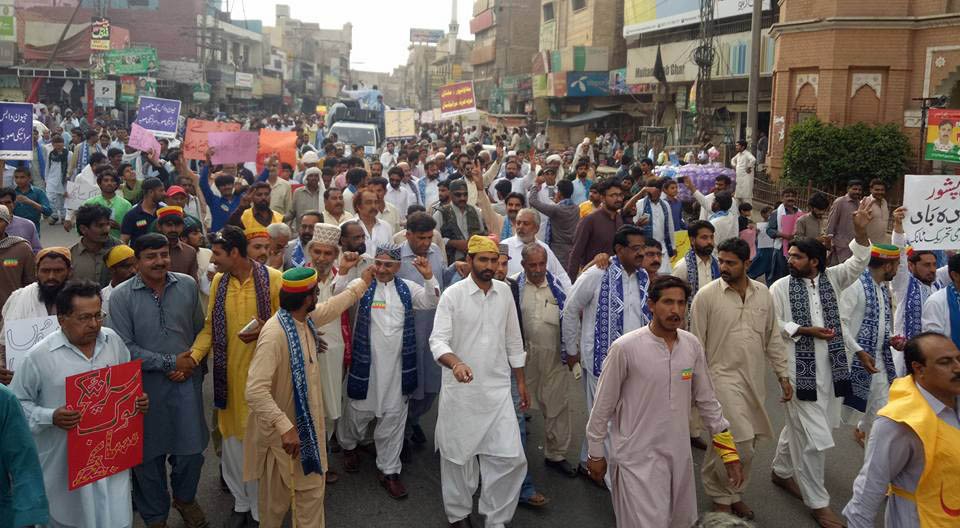 The politics around Seraiki province is getting momentum. First, it was Bilawal Bhutto Zardari, Chairman Pakistan People’s Party (PPP), who raised the issue during his three-day visit to Multan in the first week of April. In his meetings with the party workers, general public and media persons in Multan, he kept reiterating the PPP’s support for creation of a new province in Punjab.

Bilawal’s visit to Multan had not yet ended when eight parliamentarians quit the ruling Pakistan Muslim League-Nawaz (PML-N), resigned from their National and Punjab Assembly seats and formed Junoobi Punjab Sooba Mahaz (JPSM)) on April 9 in Lahore.

Notwithstanding their lofty claim to continue their struggle for creation of South Punjab province from the platform of JPSM, the leadership of JPSM decided to merge it into Pakistan Tehreek-i-Insaaf (PTI) on May 9 in Islamabad.

While addressing a public rally in Layyah next day, Bilawal took a jibe at PTI for realising the issue of South Punjab province just a few months before the election. He said PTI was raising the issue just to befool the people for getting their votes.

Politicking around creation of Seraiki province by two major parliamentary political parties -- PPP and PTI -- has ignited a new public debate and activism among the Seraiki youth and intelligentsia.

Just a few days after Bilawal’s rally in Layyah and merger of JPSM into PTI, three different activities on the issue of a new province were organised in Multan on May 13. One, a meeting of coordination committee of different Seraiki nationalist parties was convened to explore the possibilities of engaging with the JPSM. Its purpose -- to engage with a group that doesn’t exist anymore --remains unclear.

Two, Jamshed Dasti, an MNA and head of Awami Raj Party, organised a public meeting on South Punjab province at Qila Kohna Qasim Bagh. Participation of Sheikh Rashid was the only prominent feature of the event. The speakers focused more on naming and shaming of existing political elite, particularly PML-N head Nawaz Sharif, than on their demand for South Punjab province.

Just a few days after Bilawal’s rally in Layyah and merger of JPSM into PTI, three different activities on new province were organised in Multan on May 13.

"We established Seraiki Loke Saanjh in 1986 to promote Seraiki language, literature, art and culture. In its first phase of activism, the Saanjh focused on literary and cultural activism to create Seraiki identity consciousness. Now we are entering into a new phase of activism to assert and claim our political and economic rights," said Mahmood Nizami, an intellectual from Taunsa Shareef.

The call for rally was given on the social media. Delegations from different districts of south-western Punjab from Mianwali to Rahimyar Khan as well as from Tank, Dera Ismail Khan, Islamabad, Lahore and Karachi started to arrive around 3pm at Kucheyry Chowk Multan.

Seraiki folk and nationalist songs being played from a sound system mounted on a mini-truck were attracting the delegates reaching the venue. While dancing to the tunes of songs and chanting slogans in favour of Seraiki province, each delegation huddled around the truck.

"We want Seraiki province without much ado. This is not the first rally. We have already organised such a rally in Islamabad last month. Nor will this be the last event. Rather we will continue our struggle unless our demand for Seraiki province is met," said Safdar Klasra, a representative of Seraiki Journalists’ Saanjh.

By the time the rally started to move, thousands of children, students, women, poets, singers, musicians, media persons, writers, intellectuals and political activists had gathered at the venue.

"Wider participation of people from different sections of the society and different parts of Seraiki wassayb is the major success of the rally. It is the moment of reoccupying political and cultural space in the most historic parts of Multan," said Mansoor Kareem Siyal an intellectual and political activist from Multan. He termed the rally the second most important historical event of Seraiki nationalist struggle after the Seraiki Conference organised in Multan in 1975.

"Today we the students of Quaid-i-Azam University (QAU), National University of Modern Languages (NUML), University of Lahore, Federal Urdu University and International Islamic University have gathered here to put an end to illegitimate control of Seraiki wassayb by Punjab. Our one and only demand is Seraiki province," said Asad Buzdar, a representative of Seraiki Students’ Council, QAU, Islamabad.

"Ranjeet Singh occupied Multan in 1818 and forcibly annexed Seraiki wassayb to Punjab. We have gathered here to free our land from the 200-year-old illegitimate occupation of Ranjeeti forces and defeat Takht-i-Lahore through our writings, poetry, music and dance," said Fazal Lund, an activist of Seraiki Loke Saanjh.

"Out of Rs5,600 billion given to Punjab under National Finance Commission (NFC) award since 2010, only Rs272 billion have been spent on Seraiki wassayb. For the last 200 years, Punjab has been exploiting our natural and economic resources. We cannot get rid of this economic exploitation unless we get separation from Punjab," said Rana Abrar Khalid, a Seraiki Loke Saanjh activist.

Besides Aashiq Deewana and Shah Nishat Qureshi, a delegation of Cholistani singers and musicians led by Aadoo Bhagat and Mohan Bhagat also joined the rally and gave live musical performances at Ghanta Ghar, where the rally culminated and the organisers presented a five point declaration:

As the last point was being read, the participants gave a rousing applause and started performing jhoomer, a traditional Seraiki dance.