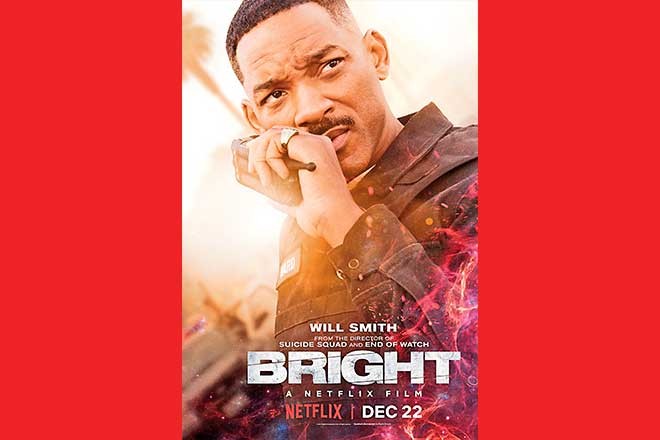 So you have a world with humans and elves and orcs (and other fantastical creatures like fairies and centaurs) all interacting with one another. No, it isn’t Tolkien’s Middle-Earth but an alternate present-day Los Angeles. In this major original Netflix production with a reported budget of USD 90M and available on the streaming service right now, elves are the elite, the brutish, tusk-toothed orcs occupy the bottom rung of the social and economic ladder and humans are somewhere in between. It’s an interesting (if not completely original) concept that mixes high fantasy with an allegory for modern day race-relations but writer Max Landis and director David Ayer (Suicide Squad, End Of Watch) don’t do anything even remotely engaging with it.

Two LA cops - the human Ward (Will Smith) and the first orc to join the police force as part of a diversity initiative, Jakoby (an unrecognisable Joel Edgerton) - find themselves in the middle of something far greater than they could have imagined when they answer the call to a shoot-out in progress in a rough neighbourhood. The end of the world might be upon us as dark elves led by Leilah (Noomi Rapace) aim to unleash some deadly black magic with the help of an enchanted wand, now in the possession of a half-mute girl (Lucy Fry) but are Ward and Jakoby up to the task? And can they iron out their differences while they are at it?

Rather than taking the time to explore the magical world that they’ve set up Ayer and Landis overload the movie with repetitive gunfights and car chases. The main plot itself is rather confusing and characterisation (unless Smith mouthing a few bad quips counts as such) gets thrown out of the window. We are also hit over the head with its messaging on tolerance and acceptance. Subtlety is not this movie’s forte.

Cut to chase: The concept is cool enough, the execution rather dull and pedantic.

This follow-up to Paul King’s 2014 adaptation of author Michael Bond’s adventures of the beloved Peruvian bear adopted by a London family is almost as charming as the first film. Director and co-writer King recaptures the same combination of whimsy and fun which made his first Paddington such surprising entertainment. It also carries the same important messages of tolerance and acceptance and kindness to others which have become even more important since the release of the first movie in this post-Trump, post-Brexit world of ours.

The story revolves around Paddington’s efforts to buy a rare and expensive pop-up book of London’s main tourist sites as a birthday gift for his Aunt Lucy. But the dastardly – and wonderfully named – Phoenix Buchanan (hilariously essayed by a hammy Hugh Grant having the time of his life upending his own screen image) is after the same book for rather less altruistic reasons. This leads to all sorts of whacky adventures with Paddington even finding himself in jail at one point. It’s all rather good fun and comes with very good animation (Paddington is a CGI creation and the animated London pop-up sequences are a treat) and none of the stellar cast of British actors phones it in.

Cut to chase: Not quite as revelatory as its predecessor but almost as charming.