The government’s Integrated Project for Elimination of Child Labour has been relaunched. But its success shall depend on how much are the children’s elders incentivised 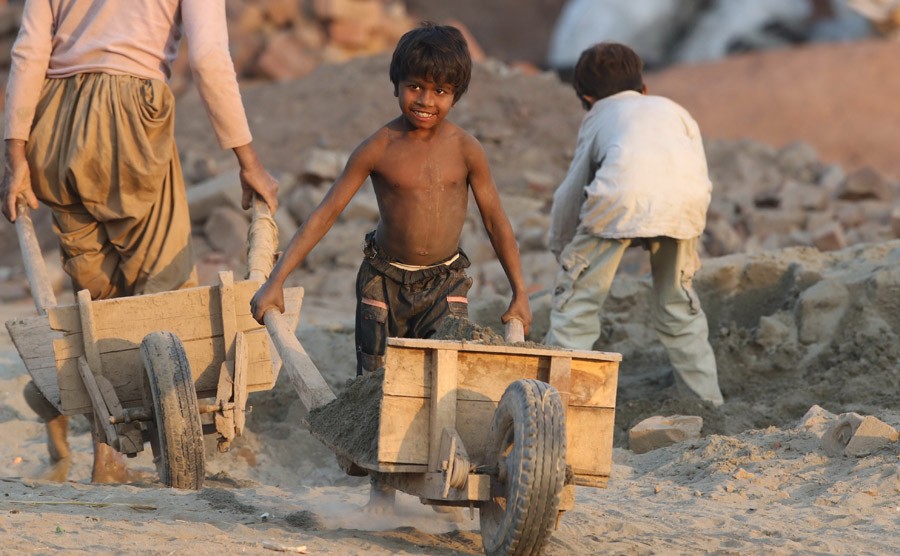 The Chaapa Minara locality in Sheikhupura is home to a large number of brick kilns situated close to each other. A significant number of its population comprises workers who either live at the housing provided at brick kilns or in localities a little away from their workplaces.

On any given day, they are seen working at the kilns or the surrounding fields from where they bring mud to make bricks. Many of them are visible to the commuters using roads to reach neighbouring destinations because the brick kilns are built in outskirts and open spaces away from the residential areas. The hazardous smoke the chimneys of these brick kilns emit make them unsuitable for these areas.

The most vulnerable are the workers who walk to the brick kilns before dawn and fear the risk of being hit by heavy vehicles on badly lit roads.

One reason why there is concentration of brick kilns here is the area’s proximity to big cities like Lahore and Faisalabad where construction activity is going on at fast pace. Consumption in Sheikhupura is also quite significant. Even when there is slump in economy, the need for bricks as major construction material is there.

Sadly, the workforce employed in this important sector leads a miserable life. Worse still, they have resigned themselves to their fate. The presence of undernourished, untidy, and seemingly ill children in the vicinity of brick kilns in Chaapa Minara strengthens this perception. They are children of brick kiln workers who have been barred by their parents or older relatives from going to the brick kilns. If they are spotted by labour inspectors at brick kilns, it would tantamount to violation of the law that prohibits them from engaging in labour. Their presence at the brick kilns during school time clearly shows that the law is being violated. The onus lies on the parents and brick kiln owners to prove otherwise.

Certain initiatives were taken by the government in the past few years to improve the situation and end child labour at brick kilns, and enroll children in schools. A law was also enacted for the purpose, and an incentive of Rs1,000 per child per month was announced for the families that decided not to engage their children in work. It was in a way a partial compensation for the loss of income to the family due to the non-participation of their children in brick-making. The Integrated Project for Elimination of Child Labour was the main component of the government’s strategy to discourage child labour but it was stalled and has now been restarted.

The situation at the moment is that although there is no disagreement on the need for such interventions, there is difference of opinion on how to go about all this. A strong argument in this regard is that the socioeconomic and cultural factors shall also be taken into account to make such initiatives workable instead of forcing things on targeted groups.

The issue of child labour cannot be resolved until and unless the minimum wage rate announced for workers is ensured, they are given social security cover and exempted from deductions under the notorious peshgi (payment of advance on exploitative payback terms) system.

"An example of how things done in isolation can go wrong is that many parents have got their children employed at auto workshops or tea stalls and dhabas etc so that they can earn and at the same time learn skills," says Maqsood Ali, who works with Awam Dost Organisation running schools for children trapped in child labour in Sheikhupura.

He says that the children are not as easily noticed here as compared to brick kilns, so the parents see it as the best solution. "The project of setting up schools with the support of NGOs was launched with great fanfare but soon the children highlighted in child surveys began to slip away. There were apprehensions about the quality of surveys as well as the enforcement of the law."

It has been observed that children still work at brick kilns, though not as openly as before. The situation is bad at brick kilns that are away from the main roads and less accessible for inspectors. The munshis at these brick kilns can see anyone approaching, from a distance, and alert the workers.

Mariam Bibi, a brick kiln worker in Chaapa Minara, says it is "very hard for us to part with our children while at work, because they earn as per the number of bricks they produce. When the whole family works, more bricks are produced and more income generated."

The children, Bibi says, leave for the fields as early as 3 in the morning, as they are required to extract mud and soften it for brick-making before their elders arrive. This is safe as they are not visible to labour inspectors at this time.

Similarly, the children have to carry food for their parents working at brick kilns.

Mahar Safdar Ali of Bonded Labour Liberation Front (BLLF) Pakistan is of the view that the issue of child labour cannot be resolved until and unless the minimum wage rate announced for workers is ensured, they are given social security cover and exempted from deductions under the notorious peshgi (payment of advance on exploitative payback terms) system.

She says that when you have good income, free medical and educational facilities, marriage grants for your daughters etc, the workers will not be forced to engage their children in work. Without ensuring these things, and merely on the basis of enforcement, the required results cannot be achieved.

According to the law on the elimination of child labour, if a child over the age of five years is found at the brick kiln during school timings, he shall, until the contrary is proved, be deemed to have been employed, engaged, or permitted to work at the brick kiln.

"If a question arises as to the age of the person who is employed, permitted to work, or found at the brick kiln, the person shall be presumed to be a child unless the contrary is proved through the computerised national identity card or registration certificate (Form-B) with the National Database and Registration Authority or the birth certificate issued by the competent authority. The burden shall lie jointly on the occupier and parent or guardian to prove that a person found or working at the brick kiln is not a child."

In case of a violation, the brick kiln owner and parents of the child worker can be booked and the kiln sealed.

Schooling of children of brick kiln workers is very important, but the focus should be on an overall improvement in living standards at the brick kilns, says Ayyaz Hussain, a lawyer who has been working for brick kiln workers’ rights for many years.

He says that a majority of brick kiln owners use poultry waste, rubber, used mobile oil and plastic waste as fuel in brick kilns that cause respiratory problems, especially among children. Besides, the labour works at open places in all sorts of weathers that badly affect their health.

Hussain says he has visited many brick kilns and prepared a situation paper on the basis of his observations, interviews with workers, and informal discussions with the staff of government departments dealing with brick kilns.

He found that "there is no clean drinking water at the brick kilns, the level of air pollution is very high, and there is no suitable place for garbage waste. Also, there are no toilets, and the workers are compelled to live in inhuman conditions in the absence of proper ventilation. The water quality for soaking mud is poor as well. There is no resting place at the brick kilns, nor a recreational facility for children. No wonder they have to go to distant places and often become vulnerable to abduction, physical harm, and abuse.

Dr Suhail Shahzad, Additional Secretary, Department of Labour, Punjab agrees that the project to enroll children involved in child labour in schools was stalled but clarifies that it was done in order to reset the priorities based on the feedback received regarding its implementation.

"No doubt there is a need for an integrated approach involving multiple departments, individuals, volunteers, and organisations to achieve the desired results."

The government, he adds, is revising the model and incorporating vocational education in the curriculum because parents of these children do not find any attraction in giving generalised income to their children. Besides, "the government has become increasingly strict with regard to enforcement; now the concerned officials are registering FIRs against businesses employing child labour such as roadside restaurants, motor mechanic workshops, and service stations.

"We give two warnings before taking action," he concludes.