For those of us who wish to one day steer the country towards a positive change, it is still a dream in the distant future to go out in the streets and be heard by the decision-makers 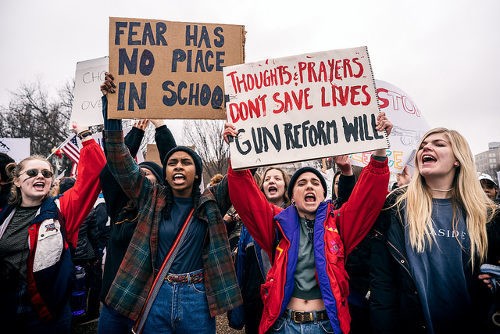 On March 24, the world witnessed one of the largest student-led protests in history. What had begun as a platform for the teenage victims of the Stoneman Douglas High School shooting massacre to speak out on, burgeoned into a mass demonstration in support of tighter gun control legislation, whose effect reverberated throughout the world.

Electronic and social media became alight with photos of these brave students who had the courage to take their leaders head-on. It was a pivotal moment that led to the acknowledgment of an important force in the field: the voice of the students.

To me, seeing the governments, organisations, and ordinary people stopping to listen to the younger generation and giving them a chance to speak out, was nothing short of a hallelujah moment. The jubilance, however, was bittersweet. Back in my own country, things were very different. It was as if the global wave perpetuating a new era of student activism had failed to penetrate my territory.

Here, the fear of stepping out from the shadows was as strong as before in the minds of its citizens -- no one dared to put a toe out of line. The disappointment was overwhelming, more so because it hit home.

In 2017, I was recruited as a country representative for a non-profit organisation called Global Zero that works to eliminate nuclear weapons worldwide. My induction was followed by a five-day training programme in Washington DC where I was taught the basics of activism. While the experience was enlightening, what I really took away from Activism 101 was the realisation that my voice mattered.

I landed back home with an empowered mindset, ready to put my training into effect as soon as possible. What I had not anticipated, however, was the obvious: I was no longer in the US. I was in a country where, if you went against the status quo, you were targetted. In asking people to support me in my endeavour to end the very nuclear weapons that, according to them, were holding India back from finishing us off, I was repudiating state-fed facts that had been ingrained in the minds of the citizens from an early age.

Since I spoke a ‘different’ language, my words did not exist in their dictionary, and so they refused to acknowledge them. I was called a traitor and a tool in the hands of the West, by my very own people. The verbal lashings, meant to discourage me, were no surprise. In a country where the majority hates a 15-year-old for demanding her basic right to education, all because she dares to speak out against the norm, I was asking for the same thing. The only difference being, Malala asked for education, and I was asking them to forego the object of their national pride: nuclear weapons.

While the response from the people was disheartening, it did not end there. My role in spearheading the anti-nuclear movement placed me in the eyes of state infrastructure that was very much against the spread of such ideas. As a Pakistani, from a very young age, you are exposed to various tools used by the state in an effort to feed you a monolithic perspective regarding the glorification of nuclear weapons. Media and academia are two sources through which the state infiltrates the mindset of the citizens and makes them believe what it wants to. Naturally, when something threatens to unwind its carefully monitored structure, the state tries its best to subdue these forces.

I got my first taste of this unpleasant truth when my counterpart in India, faced a similar situation. A few days before flying out to DC for training, she was informed via sources that authorities in India had instructed some officials to keep a track of her movements and tap into her phone records in an effort to see who she was interacting with. Back in Pakistan, we were often reminded to be cautious as well. The accompanying feeling of invasion of privacy was not only disgusting but extremely scary. The threat of being hurt by my very own government was perhaps the biggest gamble I have had to take when I chose to continue with my mission. While it did not deter me, the fear is ever-lasting.

In January this year, the news that Global Zero was indefinitely shutting down its operations in South Asia, reached us. The little hope I had left in me about changing the convictions of my countrymen was being snatched away from me. We were told that the organisation faced funding constraints but inferred that considerations about the repressive political climate had also obviously been taken into account whilst this decision was made. It was a clear indication of the impact of this level of censorship and control maintained by the states in both countries. It was a standing monument marking the evident lack of freedom of expression. Most importantly, it was just another example of why student-led activism in Pakistan is still a thing to be talked about only. The political climate does not allow it; the people do not allow it. For those of us who wish to one day steer the country towards a positive change, it is still a dream in the distant future to go out in the streets and be heard by the decision-makers.