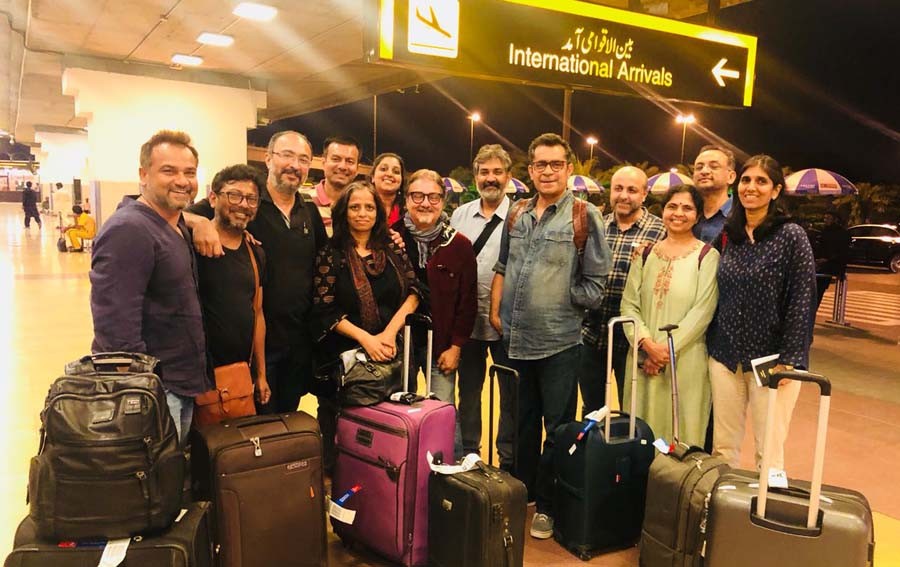 How I, an Indian, became the Creative Director and Curator of the first Pakistan International Film Festival and took a delegation of Indian filmmakers over to Karachi for the event, is a story that illustrates the people’s intense desire for cross-border connections. It is also a story of the multiple hurdles that prevent us from meeting -- hurdles that cannot quench our thirst to connect.

In October 2017, while in Karachi, I met Badar Ikram, head of Hum Films. He mentioned the upcoming first ever Pakistan International Film Festival in Karachi, in 2018. He wanted me to creatively guide and curate the festival from India.

When Badar called me in early November after I was back in Delhi, I was astonished to learn of the scale of the festival being envisaged. This would be Pakistan’s biggest film festival ever, organised under the aegis of the Karachi Film Society formed by reputed cultural icons of Pakistan, headed by Sultana Siddiqui, the dynamic force behind the Hum Network.

Given the tense relations between our countries, I was hesitant to accept the responsibility, a voluntary position which entailed curating the films, creatively guiding the overall execution, and coordinating Indian participation.

But my artistic conscience was compelling me. I discussed my dilemma with Manoj Shrivastava, former head of International Film Festival of India, Goa. He thoughtfully advised me to accept the offer. As a supporter of cinema as an art form, he said I should use the opportunity as a tool to de-escalate conflict, and stand by my conviction.

I knew it was going to be an uphill task. Just how uphill, I was to find out.

I began the arduous task of contacting and convincing filmmakers, directors, producers and actors to participate in PIFF.

There were initially many refusals. Concerns about visiting Pakistan included security. Even some who publicly support Indo-Pak artistic collaborations stopped responding to my calls and messages. But I persisted. Then came a positive response from a most unexpected quarter: Shobu, the acclaimed producer of Bahubali, showed an interest in attending the festival. Then, one after another, positive responses started pouring in. Many eminent film personalities came on board.

Gauri Shinde, director of Dear Zindagi, R. Balki, director Paa and PadMan, besides Rajat Kapoor and Rajit Kapur enthusiastically came on board, though they had to pull out at the last moment due to other commitments. Subhash Kapoor, director of the Jolly LLB series came on board, as did acclaimed actor Vinay Pathak and filmmakers Onir, Nila Madhab Panda and Raajyesh Chetwal. Some not only travelled for the festival to Karachi, but also stayed on to visit Lahore.

It is sad that we have hardly any real cross-border collaboration or films or TV drama co-productions, despite appreciating each other’s artistes. We need to stop blaming the authorities of either country for imposing impediments and look within, and do what we can as artistes to break this impasse.

Although extremely occupied with editing and mixing her forthcoming film Manto, Nandita Das, a firm believer in cross-border artistic collaboration, took time out to participate. It was also wonderful to have with us the recently released Hindi Medium’s director Saket Chaudhary and writer Zeenat Lakhani, a film that had Pakistani sensation Saba Qamar in the lead role despite the heightened pressure and hate-mongering.

Getting eminent filmmaker Vishal Bhardwaj on board was a major accomplishment. I was so thrilled to hear this. It felt like the universe was conspiring to help us to unite the artistic conscience of South Asia. The cherry on the cake was a confirmation from his wife, acclaimed singer Rekha Bhardwaj.

A month passed with great anxiety, as some of those who had confirmed were asking for details. Finally in January, Badar Ikram called, profusely apologetic for the silence. They had been busy trying to obtain the necessary clearances. After that, it was a smooth sailing in terms of coordinating with the organizing team.

But there were more challenges in store. A few days before the festival which was to start on 29 March, a massive diplomatic row erupted between the two nations, each blaming the other for intimidating their diplomats. It was a very tough time in terms of taking decisions and keeping things on track while also keeping the delegates interested in attending the festival -- some withdrawals also came during this period.

On the inaugural day we attended the premiere of one of Pakistan’s best directed films in recent times, Cake. The Indian delegates admired the script, direction and performances of actors in the film. Everyday there were multiple panel discussions, simultaneous film screenings at four festival venues, and interactions with filmmakers. Every evening there were gala dinners, hosted by festival supporters, attended by the who’s who of Pakistan’s show biz, like Mahira Khan, Ali Zafar, Sanam Saeed, Asim Raza among others. Eminent producer/exhibitor Nadeem Mandviwala graciously came to meet us, as did ace industrialist Amin Hashwani. Filmmaker Asim Raza took us over to his house at 2am one night. The Governor of Sindh and his gracious wife hosted us for a special lunch reception at their official residence.

Our interactions have motivated filmmakers from India and Pakistan to plan for greater collaborations in the space of cinema and arts.

I proposed the idea of setting up a South Asia Film Federation -- a platform to facilitate filmmakers, actors, producers in the region to communicate, exchange ideas, plan collaborations, joint productions, line-production, distribution and screenings and organise workshops for film students and provide them a platform to seek work in each other’s countries. Everyone supported my idea, and authorised me to work further on it.

The warmth of Pakistan’s film fraternity and people in general towards us was mesmerizing. At one-point Subhash Kapoor of Jolly LLB commented, "If there is any country in the world where one gets respect for just being an Indian, then that country is Pakistan. In other countries, you may get respect for your individual achievements, but in Pakistan you are respected just for being an Indian." Everyone in the Indian delegation agreed.

Vinay Pathak said he "didn’t have enough luggage to carry the unprecedented love showered by Pakistanis to India."

I took some of the Indian filmmakers to visit Lahore after the festival. We toured the Walled City and visited the prestigious National College of Arts and interacted with students. Yusuf Salahuddin, grandson of Pakistan’s national poet Allama Iqbal, hosted us or dinner at his elegant haveli in the Walled City, and lovingly served us homemade delights. Producer Rashid Khawaja, besides having us over to his residence for dinner, also took us around the city.

From among many pleasant encounters, one stands out. During a gala night in Karachi, I noticed some beautiful bracelets a gentleman was wearing. When I admired them, he promptly took off one and gave it to me. I refused, saying that appreciating something doesn’t mean I want it, but he refused to listen to me. He insisted on putting it on my wrist then took a selfie with me. I was overwhelmed with the love of this stranger.

There are many such stories, experienced by each of the Indian delegates.

With the first ever Pakistan International Film Festival over, we wish Pakistani film industry all success. The country has some of the brightest talents imaginable. Resuming film cooperation between artistes across the border will benefit audiences on both sides, providing them access to better content.

Pakistani and Indian audiences have strikingly similar tastes when it comes to cinema, music and literature. Pakistanis love Indian films, while Indians love Pakistani television dramas. I remember the 1980s when new episodes of dramas like Bakra Kiston Par would be smuggled-in on VHS tapes.

It is sad that we have hardly any real cross-border collaboration or films or TV drama co-productions, despite appreciating each other’s artists. We need to stop blaming the authorities of either country for imposing impediments and look within, each do what we can as artistes to break this impasse. The onus lies upon us, the creators of the content, to engage with talent regardless of borders and barriers.

A side benefit of this would be to instil a sense of hope, compassion and peace. Such collaborations are in our national and human interest.

So now I am planning to hold a Pakistani Film Festival in Delhi under my non-profit SAFACH (South Asia Forum for Art & Creative Heritage) to showcase some of the best films produced in Pakistan in the past couple of years. I plan to invite Pakistani filmmakers for the festival, put in an honest effort and hope the authorities will go upon merit and allow it to happen.

Let the audience, even if limited, experience cinema from the other side.