Faith in elections and democracy

Are the extreme-right religious groups effecting an insidious competition among the mainstream political actors to become more religious than they already are? 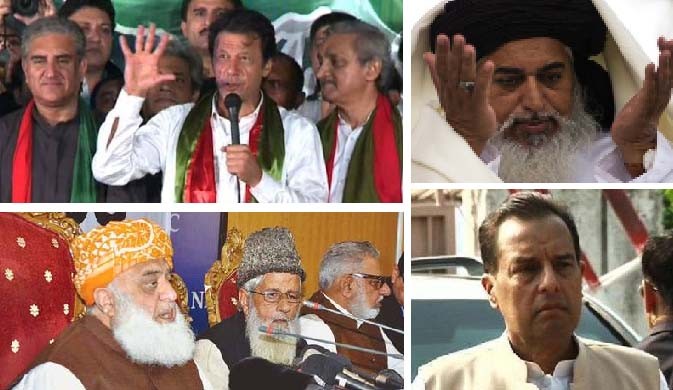 It is election season and votes suddenly matter a great deal more than usual. In Pakistan’s multi-national, multi-ethnic, multi-religious milieu, the political parties want to be a champion of everything and everyone to optimise their appeal. But how far can parties and their leaders go to maximise their appeal to a traditionally conservative populace? Other than over-simplistic narratives on corruption and governance, it appears that faith and piety have become the principal determinant of a maximalist electoral appeal.

Religion is suddenly everywhere in the body politic -- in many ways more pervasive and intrusive than even in the times of the unabashedly faith-driven martial law of Ziaul Haq. Nawaz Sharif may have been put in the crosshairs of the Panama scandal by sheer bad luck but he was eventually only felled by religious interpretations by the apex court of ‘sadiq’ and ‘ameen’ as articulated in Zia’s use of religion to carve out eligibility criteria for parliamentarians. Imran Khan was also formally declared ‘sadiq’ and ‘ameen’ -- hence a ‘good Muslim’ -- by the same court in a case filed by his political rivals.

While both Sharif’s PML-N and Khan’s PTI are traditionally considered placed right of centre on the political map in terms of formally espoused ideologies, they have not shied away from employing their administrations in Punjab and Khyber Pakhtunkhwa to jog down the extra mile in wooing the far right. Their desperation demands it.

The PTI government awarded a Rs300 million public grant to the private madrassa network of far-right JUI-S of Maulana Samiul Haq, known as ideologically close to the Taliban interpretations of Islam. Additionally, the Pervez Khattak government announced in December 2017 a programme to award a Rs10,000 stipend to 30,000 mosque imams across the province -- which will cost the public kitty a staggering Rs3 billion a year for private benefit. The PTI-led coalition government’s education ministry has been with JI of Sirajul Haq, which has ensured that any and all attempts of the preceding ANP government to purge the textbooks of references of jihad have been reversed and additional Islamic heroes inserted into them and verses from the Quran added to even science subjects. The lynching of student Mashal Khan on charges of blasphemy is an indicator of the depths of conservatism now ruling academia in the province.

The Punjab government has recently made pointed efforts at reversing a lot of the progressive agenda it attempted in its first years in this tenure. It put off functional implementation of the enforcement mechanism on the well-received anti-domestic violence bill it had enacted. It has also reversed its ban on mosques from having four-way loudspeakers and retreated from an earlier attempt to reduce the decibels emanating from the pulpit. It has now also made nazira Quran in Arabic compulsory for all students in all schools in the province. The PML-N federal government recently also stiffened penalties under the Ehteram-e-Ramzan Ordinance.

The Punjab government has recently made pointed efforts at reversing a lot of the progressive agenda it attempted in its first years in this tenure. It has reversed its ban on mosques from having four-way loudspeakers. It has now also made nazira Quran in Arabic compulsory for all students in all schools in the province.

It agreed to appease the Barelvis by forcing its own federal law minister to resign on an as-yet unproven indiscretion and also its provincial law minister to apologise to the same religious group for defending Ahmedis.

But perhaps the biggest transformation of an erstwhile liberal into a staunch conservative is Imran Khan who seems to have transformed his political fortunes by regular public displays of piety and private forays into avowed spiritualism. In a rightward lurch foretold, he became probably the first political leader to offer namaz on stage at his famous 2011 Lahore jalsa. He has now bookended his personal life by marrying his spiritual guide who is an intensely conservative person and leads her new husband’s religious education.

Imran has stopped idolising Singapore, Malaysia and South Korea as ideal political states, and now profusely quotes from scripture and hadis as guidelines to statecraft. At his latest ‘mega’ Lahore jalsa this month he upended even the most Islamist of his religious allies by promising to convert Pakistan into a ‘Medina Riasat’.

The religious parties -- both contributors to and restlessly inspired by their own faith-fuelled political rhetoric -- have seen the writing on the wall and discerned their best electoral chance lies in embodying an enhanced holy veneer to their political aspirations. The Muttahida Majlis-e-Amal has been revived by the motley crew of the aggressively faithful maulvi-politicos and their parties even though most of its constituents were in different administrative camps these past five years.

That it’s critical to stay on the right side of religious sentiments in Pakistani politics even while espousing a secular and progressive worldview is clear from the fact that Bilawal Bhutto visited the offices of Dawat-e-Islami, an influential religious group, this month and promptly agreed to their request for the PPP’s Sindh government to allocate 150 acres of state land in Karachi for them to set up "an international standard university of Quran and Hadis teachings".

Bilawal clearly knows his political Pakistan and has unhesitatingly taken the same path trod by his illustrious mother.

While Pakistan has always been religious, it has experimented with political Islam in various shades. From Zulfikar Ali Bhutto’s short-lived ‘Islamic socialism’ to the longevity of Ziaul Haq’s stubborn ‘Wahabi Islam’ and from declaring Ahmedis non-Muslims through constitutional exclusion to a subtly pervasive sectarian political culture -- Pakistan has tried it all albeit rarely without lasting socio-political scarring.

But perhaps the most virulent experiment is one that was rolled out only recently -- the so-called ‘political mainstreaming’ of extreme religious groups some of which are simply avatars of groups banned by the state itself. It is these groups, more overtly led by Khadim Rizvi’s Tehreek-i-Labbaik Ya Rasool Allah (TLYRA) that are taking violent political dictation of the majority by a minority to a whole new level -- blocking cities, threatening elected representatives with physical violence and attacking homes of ministers.

Using a queer cocktail of emotional religious rhetoric and inflammatory expletives, they are seizing the political narrative of the current election season and forcing the emergence of a new religious order that is as brazen as it is dangerous. Followers of these groups have already thrown ink at the foreign minister, a shoe at the former prime minister and nearly killed the interior minister -- all within weeks.

So effective are these new faith-based political narrative-drivers that even Sharif’s son-in-law is forced to compete with them on the issue of Khatam-e-Nabuwat by countering his own father-in-law’s cautious but symbolically significant attempts to espouse a more religiously pluralist political discourse.

These extreme-right religious groups -- great hopefuls at the upcoming electoral battles in Punjab and Khyber Pakhtunkhwa with recently demonstrative electoral prowess to become would-be kingmakers in a critical mass of provincial assembly seats -- are effecting an insidious competition among the mainstream political actors to become more religious than they already are.

This then fits in with the increasingly apparent agenda of the powers-that-be to effect a favourable electoral outcome through a framework of rightwing politics that ends up in pushing Pakistan into a troubling future where the lens for political engagement is exclusionary faith rather than inclusive pluralisms. It’s ironic, considering that the godfather of the average Pakistani’s worldview -- Saudi Arabia -- is jettisoning its extreme conservative political legacy. A religiously ultra-conservative Pakistan cannot possibly find its future in the past.

Faith in elections and democracy

This is not the end of the story