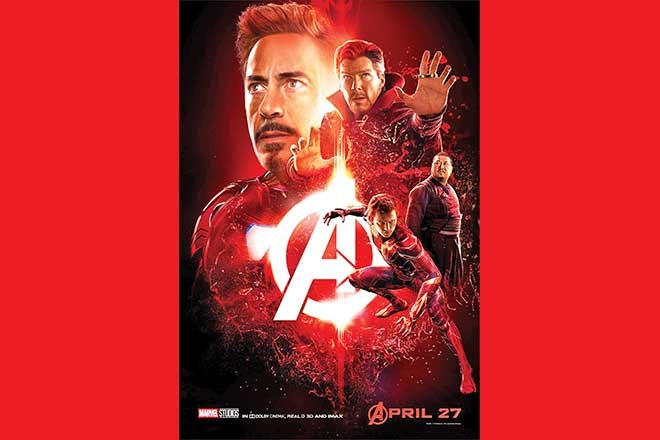 The Marvel Cinematic Universe is a decade and eighteen movies old. So ten years after Robert Downey Jr. was introduced to the world as Tony Stark/Iron Man, Marvel gives us its 19th film which brings together practically every Marvel character (with a few notable exceptions) that we’ve come to know in the interim period. The heroes - the Avengers, the Guardian Of The Galaxy, Doctor Strange, Spider-Man, and so on, they are all here – gather to face an enemy who’s been lurking in the background of the MCU since the first Avengers movie, Thanos. The Mad Titan (as he’s known in the comics) wants to gather all six Infinity Stones - gems of immense power which when wielded together have the power to change the nature of reality itself – and so our champions must work together to stop him.

Anthony and Joe Russo - the directing brothers duo behind possibly the best MCU movie yet, Captain America: The Winter Soldier - generally do a good job of holding the two and a half hour movie together and, along with script writers Christopher Markus and Stephen McFeely, give us quite a few fan-pleasing moments (like Tony Stark’s interactions with Doctor Strange and Star Lord) and some exhilarating sequences (mostly to do with Thor) and some unexpected events. They also do not let the humour go overboard as it did Thor: Ragnarok.

But with so many heroes to deal with, it’s not surprising that we end up feeling short-changed with respect to their characterisations and some of the action ends up feeling repetitive. As a consequence, Thanos (a mo-capped Josh Brolin) becomes the central figure of this (ultimately) disjointed epic where we end up having to wait till next year for a proper resolution and also realising - considering how comic books work and what is coming up in the MCU over the next few years – that the movie’s shocking events may not prove to be as permanent as we were originally made to believe. However, MCU fanatics will probably love it and it’s not surprising that the movie is currently shattering all sorts of box office records.

Cut to chase: Some very cool moments, some surprising events, but oddly dissonant.

Based on the ex-CIA agent Jason Matthews’s novel of the same name, Red Sparrow has Jennifer Lawrence playing Dominika Egorova, a ballerina, who suffers a career ending injury and is recruited into a secret wing of Russian intelligence. In Sparrow School, Dominika learns to use her mind and, more specifically, her body to seduce selected targets at the behest of her masters. She now has to uncover the true identity of an American informant, someone who has access to key Russian secrets. But who is she to trust? And which side is she truly playing for?

Though neither as atmospheric or as cerebral as the spy thrillers based on John Le Carre’s novels nor filled with wall-to-wall action like the Jason Bourne movies or the recent Charlize Theron starrer Atomic Blonde, the movie still has its fair share of brutality (there are some rough torture scenes) and nudity and some twists and turns in its plot, remaining watchable throughout. Trouble is, the twists aren’t as surprising as director Francis Lawrence (no relation to the leading lady) and screenwriter Justin Haythe would have you think and Red Sparrow never gets you emotionally engaged enough, not even as Dominika’s relationship with American spy Nate Nash (Joel Edgerton) develops. Jennifer Lawrence is good but she needed an even better, tighter script.

Cut to chase: Rough, brutal spy thriller but not quite as clever as it thinks it is.