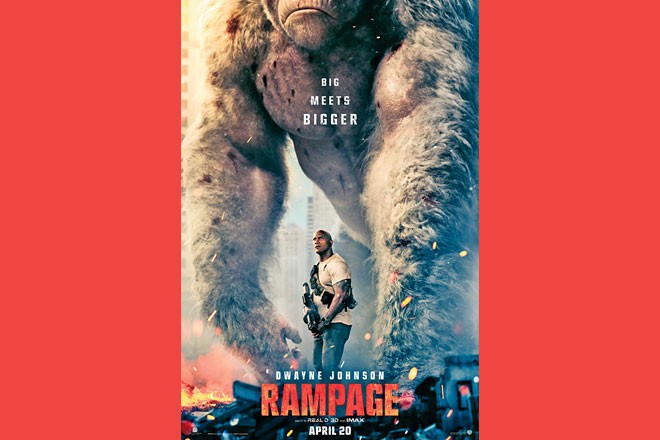 Loosely based on the video game of the same name, Rampage is the second teaming of director Brad Peyton and leading man, Dwayne (The Rock) Johnson after San Andreas. The plot pretty much describes most Johnson-starrers. Stuff happens, s**t blows up, buildings get reduced to rubble, Johnson arches his eyebrows and flexes his biceps and saves the day with a pretty face (or two) by his side. So if that’s your cup of tea you’ll probably enjoy this testosterone-fest, which has the additional fun of seeing genetically-engineered monsters – a mutated ape, a mutated wolf, and a mutated alligator – whale (no pun intended) on each other while whole cities get destroyed.

That being said, the FX is pretty good as are the monster battles and the action scenes. Johnson is Johnson and the supporting cast (many of them familiar faces) is pretty decent. In fact, Jeffrey Dean Morgan steals the show as a CIA agent with a southern drawl and a sardonic smile and George, the giant ape (motion capture provided by Jason Liles) is the other crowd pleaser. All in all, this is a big-budget B-movie, which will do okay in a pinch to help you pass the time.

Cut to chase: Shut your brain off and watch big monsters attack Chicago and themselves.

In a post-apocalyptic world, a family of five tries to survive while existing in almost complete silence as they must hide from terrifying alien creatures that are blind but hunt by sound. If they hear you they will kill you.

Director (and star) John Krasinski ratchets up the tension in this clever variation on the Alien movies by following that familiar adage that often works best for horror movies - less is more. The terrors that a mind can conjure are much worse than what the eyes can see. At the same time, Krasinski also does a fine job in making us care for the characters by quickly establishing the family dynamics revolving around his character and that of his (real-life) wife (Emily Blunt), his deaf but adventurous daughter (Millicent Simmonds, also deaf in real life), his fearful son (Noah Jupe) and younger son (Cade Woodward).

Some plot points don’t exactly make sense but that’s minor quibbling for one of the best - and different - horror movies to come along in a while.