As Tehreek-e-Labaik Pakistan ends its recent dharna at Lahore’s Data Darbar, it is perhaps time to look at its political ambitions for the forthcoming election 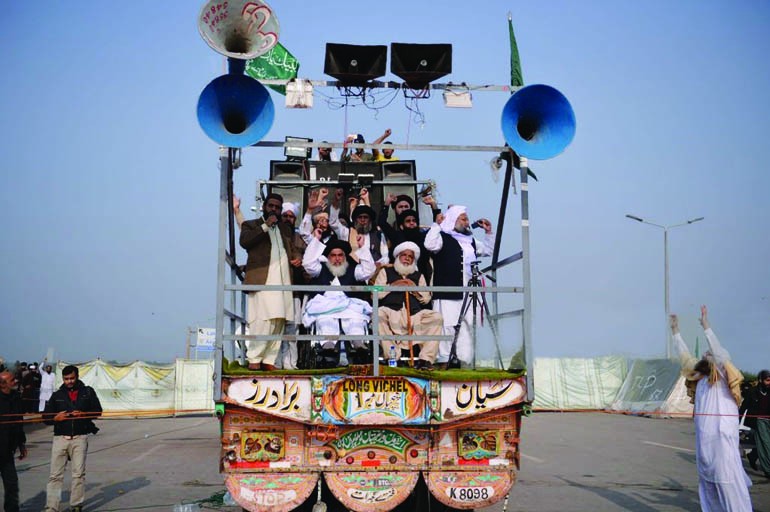 The religious clergy or leaders belonging to the Barelvi sect -- believed to be the largest in central Punjab -- started to mobilise themselves politically back in 2009, when they were used as a bulwark against the rising tide of the Taliban movement.

If one was to delve deeper into history, religio-political parties belonging to the Barelvi sect had been active in Pakistani politics since the 1970s, especially during the political agitation against the Bhutto regime. But these parties became dormant following the rise of Deobandi-led jihadism during the Afghan jihad in the 1980s and 1990s.

The establishment was looking for allies in the civil society when military operations began in tribal areas and Swat in late 2000s. Images of Sufism as the soft face of Islam took the military establishment to the doorsteps of the Barelvi leadership whom they found ready to oppose their old theological rivals -- Taliban or Deobandi jihadists. Even the US State Department (at that time closely allied with Pakistan and its efforts against religious extremism) jumped into the fray to finance Barelvi efforts in confronting the Taliban.

In 2012, the US government website USAspending.gov showed that the Sunni Ittehad Council -- a coalition of Barelvi religious organisations -- received $36,607 from Washington in 2009 under the State Department’s Public Diplomacy Programmes for Afghanistan and Pakistan.

In those days, one saw news stories of US diplomats visiting Barelvi religious shrines. It was not uncommon in those days to read eulogising accounts of Barelvi leadership’s role in making the Pakistan Movement a success.

This Sunni Ittehad Council organised a number of anti-Taliban rallies across the country in 2009. One of the constituent parts of Sunni Ittehad Council -- Aalmi Tanzeem Ahle Sunnat, an obscure religious organisation -- later became the leading light of Tehreek-e-Labaik Pakistan (TLP) of Allama Khadim Hussain Rizvi, the foul-mouthed religious scholar who led Faizabad dharna (sit-in) in November 2017.

This honeymoon between the establishment and Barelvi leadership ended in 2011 when the latter started violent protests against the arrest of Mumtaz Qadri, the police guard who killed Governor Salmaan Taseer on charges of blasphemy. But it was perhaps too late. What had been mobilised could not be demobilised so easily.

In May 2015, some of the constituent units of Sunni Ittehad Council and another obscure group Fadiyeen-e-Khatm-e-Nabuwwat joined hands to form a new political party Tehreek-e-Labaik Pakistan (TLP) under the leadership of Khadim Hussain Rizvi. A year later, the party started a countrywide registration campaign, which, according to its office bearers, attracted thousands of people. Urban protests, roadblocks and forced and dreadful traffic jams became the hallmark of Tehreek-e-Labaik Pakistan.

Although the leadership of TLP identifies itself as a Barelvi organisation, it is not too confident about attracting all Barelvi votes in the forthcoming general elections. Political analysts also see the process of consolidating the Barelvi vote bank as an impossible task.

From Sunni Ittehad Council to the Tehreek-e-Labaik Pakistan, they kept harping on the slogan of making Mumtaz Qadri a hero and demanded that the issue of finality of Prophet-hood be made the central issue of governance and politics in the country.

Twice during the past six months, TLP leadership has successfully blocked the main roads in major urban centres like Lahore, Rawalpindi and Islamabad and highways in central Punjab. Both in Lahore and Islamabad, the dharnas caused immense problems for the common people. Protestors in Islamabad were demanding to reverse a change in the law pertaining to the finality of prophethood that had already been accepted. While in Lahore, the TLP leadership kept demanding the implementation of Faizabad agreement.

Meanwhile, the TLP as a group was trying to raise its public profile. It joined electoral politics and bagged over 7,000 votes in the NA-120 by-polls in September 2017 following Nawaz Sharif’s disqualification. Since the right-wing Pakistan Muslim League-Nawaz (PML-N) was concerned about religious parties like TLP causing a dent in its vote bank, it refused to acknowledge the group’s legitimacy by either negotiating with them or confronting them directly. But its policy of waiting for the protest to fizzle out did not work either. After weeks of stagnation, the government finally went for a police operation.

Although the leadership of TLP identifies itself as a Barelvi organisation, it is not too confident about attracting all Barelvi votes in the forthcoming general elections. Political analysts also see the process of consolidating the Barelvi vote bank as an impossible task, "Barelvi vote bank is a fragmented vote bank… Besides, people don’t vote on the basis of their Barelvi sectarian identity," says Zaigham Khan, an Islamabad-based political analyst.

"We cannot claim that 100 per cent Barelvi vote bank would come to us. We are hopeful we will be able to attract voters who agree with making Khatm-e-Nubawwat the central issue of politics in the country," says Azhar Hussain Rizvi, central spokesman of TLP.

There is hardly any doubt about the fact that the issues of orthodox beliefs being raised by TLP have appeal across religious divide in Pakistani society. And some political analysts are of the view that TLP has attracted the dormant religious vote bank in the by-elections in Punjab and Peshawar, "They are basically cutting into the religious vote bank, which is not sharply divided along party lines at the grossroot level," says Zahid Hussain, senior journalist and author.

However there is every chance this religious vote bank will be divided along party or sectarian lines in the coming elections with the revival of the five party religious alliance -- Muttahida Majlis-e-Amal (MMA), led by two Deobandi organisations-Jamaat-e-Islami and Jamiat-e-Ulema Islam (JUI-F). And MMA leadership is quite adept at exploiting religious issues to attract voters.

There is, however, a lot of talk about TLP playing the role of a spoiler for PML-N in Central Punjab, where majority of population is believed to be adherent of Barelvi Islam. Firstly, the organisational structure of TLP is in the formative phase as in the words of one of its senior leaders there were no officer bearers of the organisation until a year ago. The membership drive that started in May 2016, hardly, produced any earthshaking results, "I don’t have any data before me and I can’t tell you how many new members have joined the organisation," says Azhar Hussain Rizvi, the spokesman of TLP.

Secondly, as always, religion-based politics has proved to be more of a divisive force. In the initial phase of its life, one of the constituent parts of the TLP led by Maulana Ashraf Jalali parted company with the main organisation.

Zahid Hussain says that TLP can act as a spoiler in Punjab as there exists a strong Barelvi sentiment in the society. "They have a following in big cities but the talk of a large block of votes coming their way is not correct. There is no chance of them achieving any success in the elections…..although they can act as a spoiler."

Zaigham Khan, on the contrary, holds that Barelvi vote exists on both sides of the political divide -- "between pro-Nawaz vote represented by PML-N and anti-Nawaz vote represented by PTI". He tells TNS that in NA-120 by-elections "there were indications that Labaik was dividing the pro-Nawaz Sharif vote bank as the number of votes less for PML-N were equal to the number of votes increased for Labaik. However, Chakwal and Lodhran byelection tell a different story… In these elections there was visible increase in the votes of Laibak but the votes of PML-N did not decrease".

Khan, however, opines that the political developments of past 70 years have turned Pakistani voters into enlightened voters. "They don’t strictly vote on the basis of their sectarian identities; if this had been the case, Pakistani religious parties would have secured major victories in past elections."

Will you be able to defeat Nawaz Sharif or spoil his victory, I ask the TLP spokesman. "I cannot make such a tall claim but we are determined to pursue our objectives," he replies.