This city, the inspiration for Gabriel Garcia Marquez’s magical realism and a space where African and Latin cultures merge, is a place not to do, but to be 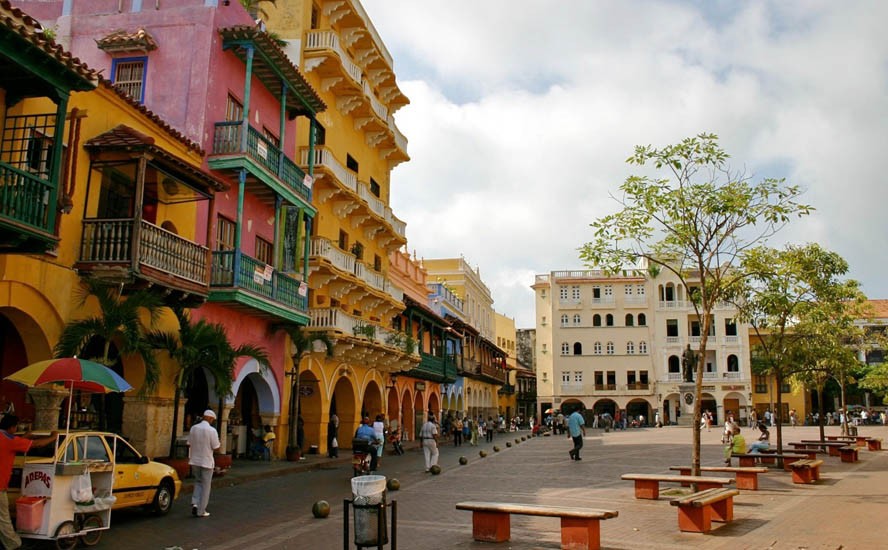 In New York, no one loiters. On the city’s wide avenues and narrow streets, where millions dressed in the many shades of grey walk daily, it is hard to find anyone hanging around. Even when New Yorkers relax, it is often a premeditated exercise: an afternoon picnic in Central Park, an organised dinner with close friends, or most prolifically, the weekend brunch.

Perhaps that is why, when I landed in Cartagena, what struck me were the people: standing by the streets, lying on the Old City Walls, lounging by the roadside that met the Caribbean Sea. Instantly, the city struck me as a place not to do, but to be.

Cartagena, a mid-sized city in Colombia, sits entirely by the sea, on the northern coast of South America. The mild climate and lushness of this part of Colombia has invited human settlements for thousands of years. In the 16th century, the city was brought under Spanish colonial rule, an influence that can be seen today in the facades of houses, churches, and government buildings.

African and Latin cultures merge in Cartagena. For the literary-minded, the city has a special significance: it is closely associated with Gabriel García Márquez, who lived and wrote in the city and was buried there in 2014. Márquez’s magical realism was heavily influenced by the city, which he described as a place of "amethyst afternoons and nights of antic breezes." It is easy to see why the city captivated Márquez, in small details like the flowers growing on balconies, the breeze that smells of the sea, and the languid afternoons.

Our hotel itself was a refurbished 19th century mansion, built in the style of a haveli, from where we could hear the church bells toll.

The evening that we arrived in Cartagena, we made our way to Cafe Del Mar, a restaurant with lively music and great views of the sea. From there, we watched the sun set, losing ourselves in conversation until it was dark.

That was perhaps the greatest charm of the city, that there was no hurry to go somewhere. Most restaurants didn’t take reservations. There were few big museums. Over the following three days, we spent most of our time walking aimlessly during the balmy days, napping in the afternoons, and staying up till late. We ate at several great restaurants, including La Cevicheria, which had delicious seafood, and La Vitrola, which used to be a Márquez favourite every time he visited the city.

The memory I carry with me of Cartagena is of waking up from a nap and going for ice cream on a slow afternoon around the time when the day’s heat finally begins to melt away.

To prepare for our trip, my friends and I looked up several city guides, trying to come up with an itinerary that would include the most "authentic" and well-reputed places. Employing countless tools to do vacation research online, we made our lists and cross-checked them with other lists.

On our second day in the city, we noticed three American women, roughly our age, at the same restaurant where we were enjoying our lunch. They didn’t even have to say a word: my American friends recognised their compatriots from a distance. Over the next two days, we saw the same women several more times: at the beach that we visited (that we thought was a secret, known only to locals) and at Pasteleria Mila, the cafe we had our final lunch at. From their conversations, we guessed they also lived in or near New York. The last time we saw them, we could not help but laugh: we had tried to go off the beaten path, but clearly, the rest of New York beat us to it.

On our sunniest day in Cartagena, we headed to the beach. The beaches in the city itself aren’t much to write home about, so we took a speedboat to the Rosario Islands. There were perhaps 20 of us on the entire island, although this included a group of rather boisterous old Argentinian men on vacation together. They laughed the entire way to the islands, took hundreds of selfies, and flirted shamelessly with the boat hostess. The sun shone brightly and my American friends chased after every ray, eager to turn darker, or as they call it here, tanner.

Meanwhile, I lay in the shade, looking out at some of the bluest waters I had ever seen. Unlike the Atlantic Ocean, which nestles the American eastern seaboard and remains frigid all year round, the Caribbean is always mild and inviting. I am a terrible swimmer but managed to wade in the shallow corners, enough to build up an appetite.

For lunch, we had red snapper caught the same day, alongside coconut rice, beans and plantains.

None of us likes shopping, so we only bought souvenirs. To my surprise, the hawkers and shopkeepers were barely interested in selling items, talking to us only when we approached them. Used to the overzealous vendors of Rawalpindi and New York, I was amazed at their reticence, this apparent lack of enthusiasm for commerce.

Cartagena is also famous for its vibrant music and dance. At night, we listened to Latin songs at the Santa Clara Hotel, where an old couple took to the dancefloor with such joy and skill that everyone applauded when they finally sat down, the man’s shirt soaked with sweat.

During our trip, we ate at La Cocina de Pepina, a tiny restaurant with eight tables where we again heard the familiar riff of the American accent. We realised that the traveller’s search for the authentic is more and more an exercise in futility. With air travel more common than ever, and the proliferation of travel guides that ultimately end up regurgitating each other, it is hard to find a place that is totally untouched by the outside world: fully Colombian, fully Pakistani, and so on.

As we left Cartagena, I thought that perhaps this was not altogether a bad thing. Colombia, until recently, was associated around the world with the cocaine trade, the figure of Pablo Escobar shrouded with a mystique that helped line the pockets of several entertainment companies, most recently Netflix. As more and more people visit the country, seeing the beauty in the day-to-day, Colombia will shake off this image and demystify itself. After all, the memory I carry with me of Cartagena is of waking up from a nap and going for ice cream, on a slow afternoon, around the time when the day’s heat finally begins to melt away.