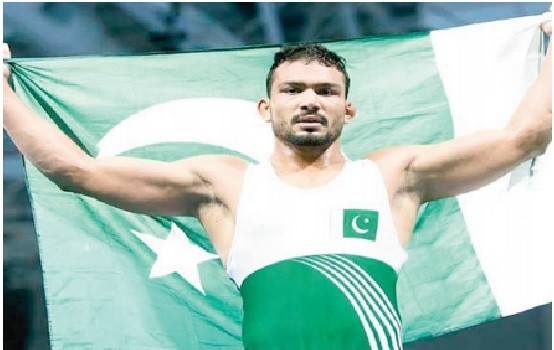 Last Friday, Pakistan’s Olympic chief hosted a handful of the country’s medal-winners at the Commonwealth Games and hailed them for their achievements at Gold Coast in Australia. While praising wrestler Muhammad Inam Butt, who won Pakistan’s only gold at the 71-nation extravaganza, and other medal-winning grapplers and weightlifters, General Arif Hasan conceded that Pakistan’s sports authorities played no role in whatever success that they achieved in Australia.

General Arif, the President of the Pakistan Olympic Association, didn’t surprise anyone by admitting that the POA as well as the sports authorities backed by the government were utter failures when it came to their primary responsibility: promote and develop sports in Pakistan. After all, it’s an open secret that even in a country where development has been painfully slow in almost all walks of life, the field of sports has been one of the biggest disappointments. That’s because instead of making any progress, sports in Pakistan has slumped over the years and the biggest reason for it is our sports officialdom. They’ve managed to ruin that was a very good thing.

Pakistan emerged as a force to be reckoned with in the world of international sports soon after gaining independence. It soared to great heights in sports like squash and hockey, becoming the world’s greatest power in both of them. Pakistan’s boxers were among the best in Asia so were their athletes. But all of that is gone, fact that was aptly underlined in Australia recently.

Pakistan began the Commonwealth Games with no hope in squash and hockey. Our squash players, as expected, turned out to be also-rans. Our hockey team finished 7th which was a highly disappointing result though one must acknowledge that it remained unbeaten throughout the course of the competition.

The end result was that Pakistan finished the Games with just five medals – one gold and four bronze – all won by their wrestlers and weightlifters. They finished 24th on the medals’ table that featured the 71 participating nations. Had Inam failed to win his gold medal in the 86kg category, Pakistan could have ended somewhere around No. 34.

Even their 24th spot is a national embarrassment. Consider this: Samoa, a tiny Polynesian nation with a population of just around 200,000 finished ahead of Pakistan at 17th place. So did Fiji, Singapore, Botswana and Trinidad and Tobago.

Just for the record, hosts Australia won a total of 198 medals including 80 gold to finish as the overall winners. England were second followed by the Indians who won 26 gold medals in their tally of 66.

In contrast, Pakistan could just win five medals and four of them were bronze. It’s pathetic. But the way things are going, even this tally would be tough for the Pakistanis to repeat when the next Commonwealth Games are held in the English city of Birmingham in four years time. The standard of Pakistan sports has been constantly falling and unfortunately there are no indications which could suggest that the slump will end in the foreseeable future. Our sports authorities are busy doing what they do best. They decided long ago that there is no charm in learning from past mistakes. Their focus remains on better things like joyrides (many continued that trend while making the trip to Gold Coast).

The question we should ask as a nation is whether this can be allowed to continue?

We are a proud country with a rich sporting heritage. We are a country that has produced the Jahangir Khans, the Shahbaz Ahmeds and the Javed Miandads of the sporting world. So why are we content with a spot that is lower than Samoa and Fiji?

Things will have to change. I ask the POA President as to what he plans to do after admitting that his organisation played no role in whatever little success that Pakistan achieved in the Commonwealth Games? Does he have a long-term plan to ensure that things are different for Pakistan in the future?

POA is just one stakeholder. I put the same question in front of the Pakistan Sports Board (PSB) and the people running it. Will they continue to give Pakistan sports enough rope to hang itself with?

The PSB in my eyes is one of the biggest culprits behind the downfall of our sports much bigger than the POA. The mostly corrupt often incompetent bureaucracy has failed in its task to develop our sports. But unfortunately it continues to function with little or no accountability. Just recently, it has been revealed that the PSB will get funding of Rs4.2 billion to keep working on existing development projects as well as starting new ones. For a country the size of Pakistan, Rs4.2 billion isn’t a big amount. But giving it to a body like the PSB with a proven track record of failure, it could well be a case of money gone down the drain.

Speaking of wastage, another episode of precious funds going down the drain is happening in Karachi which is currently hosting the Sindh Games.

Lack of proper planning means that the Games that come with a price tag of Rs40 million are being held in extremely hot weather. Despite a big funding coming from the provincial government, the Games are being run without any decent facilities. It’s just like going through the motions.

That’s the way our sports world has been functioning for quite a long time now. A lot of damage has already been done. Key sports like athletics are in a shambles. Squash is barely alive with our players even struggling at the Asian level. Hockey is trying to regain lost ground but has a lot of ground to cover. Boxing seems like a case of dead and buried. Volleyball, basketball everywhere there is a similar story. But people at the helm of bodies like POA, PSB and several national sports federations aren’t really bothered. It’s good to hear men like General Arif Hasan admitting that they’ve failed but is that enough? For Pakistan sports to bounce back, men like General Arif will have to do much more. It’s true that POA or many of the national sports federations do not have the resources to put the house of Pakistan sports back in order. But they can begin a campaign to reach that goal by forcing more resourceful bodies like PSB to do their job.