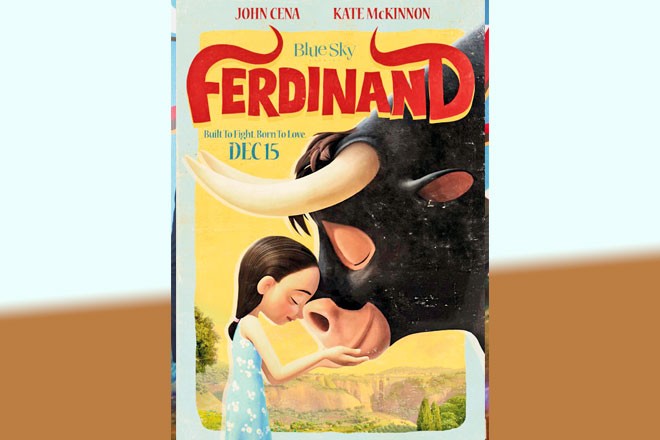 Ferdinand was one of this year’s Oscar nominees for Best Animated Feature Film. But that’s not really reflective of its quality. It’s a middling adaptation of Munro Leaf’s The Story Of Ferdinand, the children’s book once banned by Franco’s Spain and Hitler’s Germany for its "subversive" messaging and which told the tale of a large but gentle bull who would rather smell the flowers than fight in the bull-ring.

The lessons to be learnt from the tale - don’t judge a book by its cover, gentleness and compassion and gentleness can be more powerful than violence and competition, following your own heart is sometimes more important than necessarily following society’s rules – still resonate and come through in this version and the animation is fine but there’s not enough here to carry the movie for its running time of 106 minutes.

There are a couple of quite amusing sequences (the-bull-in-a-china shop is a riot and a dance off between some bulls and a trio of snobbish German Lipizzaner horses is wacky yet fun) but the movie as a whole is a bit thin and most of the supporting characters are more irritating (Kate McKinnon’s silly goat, for one) than endearing or charming or funny.

Cut to chase: Not terrible but not nearly engaging enough.

Well, well, well. Two good Pakistani releases already in 2018. So after the disappointments of the past two years, this just might turn out to be a great twelve months for local cinema. After Cake, we now get Motorcycle Girl, writer/director Adnan Sarwar’s fictionalised version of young Zenith Irfan’s historic solo 3,200 KM motorbike ride from Lahore to the Khunjerab Pass, bordering China in August 2015.

Sarwar’s second movie already shows his growth as a filmmaker. I liked his debut film Shah (his biopic about Husain Shah, Pakistan’s Olympic boxing medalist) quite a bit but his neophyte status showed. Here, Sarwar is much more assured with his camera work, his scripting and dialogue and the general pacing of the film. Sure, the film could easily have lost 20 minutes or so and the messaging at the end could have done with a lot more subtlety. Plus, for a movie which is all about female empowerment, it was a bit disappointing to hear Zenith (Sohai Abro) state that all she was and all that she had achieved was because of her late father. That negated any role that her widowed mother - someone who raised Zenith single-handedly from the age of 11 months - may have had in moulding her into the person she became. But, overall, there’s a lot to like about the film.

The celebration of Pakistan’s natural beauty, the understated but powerful strain of patriotism running throughout, and the message that our women can do absolutely anything and, indeed, should be encouraged to follow their dreams. The natural humour in the dialogue and script (the social media messaging bits are quite witty) is a major plus and the acting is fine across the board, with Sohai Abro absolutely sparkling as the titular character. Samina Peerzada as Zenith’s mother doesn’t have much to do but Ali Kazmi as a potential suitor, Sarmad Khoosat as her unsympathetic boss and Shamim Hilaly as her old-fashioned grandmother, all make the best of what they are given. (Adnan Sarwar himself also has a small but pivotal role in the movie). Go on this trip with Motorcycle Girl. You won’t be disappointed.

Cut to chase: A tale worth telling well told. Recommended.