A tale of two medinas

There is a lot that needs to be done to revitalise the androon shehr, and the medinas of Fes, Tangier, or Marrakech are a great case study to learn from 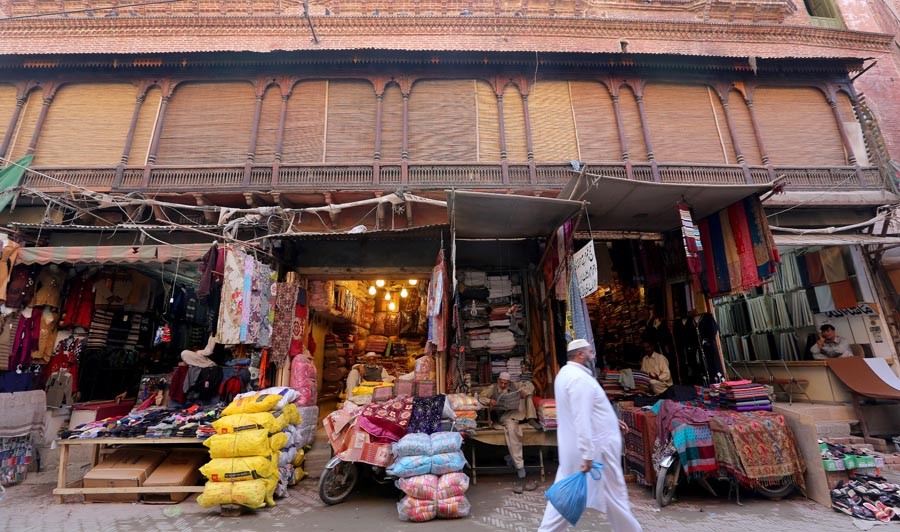 Narrow streets lined by double- or triple-storey buildings create natural shade, making it easier to walk during the heat of day; courtyards in homes are an effective provision for natural light and fresh air, whilst high ceilings and multiple floors form a natural means to regulate temperature. This is but some of the wisdom of old architecture in the androon shehr (vernacular for ‘interior city’) of Lahore which we have discredited over the years.

As the city expanded outwards, tradition was replaced by, at first colonial, and eventually, western methodologies of urban design and architecture -- deemed signs of progress and social status -- but was never properly contextualised to blend with our social fabric, climate, or environment.

Strolling through cities in Morocco one becomes aware of the lack of heritage in our own. Fes, Tangier, Essaouira, and Marrakech, for instance, boast whole areas of old neighbourhoods -- the medinas -- where heritage is in abundance while newer parts of the city, although characteristically different, still harbour a semblance of character and identity with their past. Unfortunately, in Pakistan, it is rare to find a city where such a tangible and pervasive sense of culture and heritage exists. They exist in pockets -- primarily in the historic districts -- but rather than being an influence for the expanding city, those areas have been relegated to the sidelines of society and consciousness, their existence instead threatened by the modern expansion of the city.

Lahore’s androon shehr is a perfect example of powerlines cobwebbing the view of the sky, peeling paint, crumbling infrastructure, dilapidated roads, garbage strewn around, drains open to the sky, unregulated and illegal construction, and signboards that are more of an eyesore than informative. It takes imagination to see past the dereliction to acknowledge the potential it harbours.

Instead of wires crisscrossing overhead one could picture the countless wooden balconies jutting out from pastel coloured facades, cobblestone streets devoid of cars and bikes allowing pedestrians to walk freely, shop owners with their wares on display out in the street, and the smell of delicious desi food wafting through the air.

Such scenes are prevalent in the medina of Marrakech -- sans desi food smells, of course -- presenting how heritage rehabilitation can breathe life back into a neighbourhood. Roads repaved with adequate sanitation and garbage disposal, walls with fresh coats of plaster and ochre red paint, wooden awnings with intricate patterns above storefronts for shade from the elements, mosque entrances framed by exquisite calligraphic and geometric stucco carvings, historic landmarks renovated into museums and tourist attractions; each aspect aiding in preserving heritage as well as inadvertently welcoming further investment.

The space itself becomes a melting pot of cosmopolitanism where tourists and locals throng the streets and squares. Adding to the character of the medina are the fortification walls that skirt it, delineating it from the rest of the city.

The entrances into the medina are punctuated by elaborate archways, similar to the ones in the other medinas of Morocco, chiefly Fes, Tangier, and Rabat.

Just like Marrakech’s medina, the Walled City of Lahore is a mix of residential neighbourhoods interspersed with bazaars and workshops for different kinds of trades.

Just like Marrakech’s medina, the Walled City of Lahore is a mix of residential neighbourhoods interspersed with bazaars and workshops for different kinds of trades. Historic landmarks are scattered throughout: Wazir Khan Mosque, Sunehri Mosque, Shahi Hamam, Barudkhana and countless other havelis. Imagine what it would be like to walk along a reconstructed wall skirting the androon shehr, and entering through one of the many restored darwazas (gates) to explore a space brimming with aesthetic beauty and intrigue hearkening back to a long-forgotten dream.

The Shahi Guzargah -- the area around Delhi Gate leading up to Wazir Khan Mosque -- is one of the few examples of rehabilitation efforts that have been carried out in androon shehr, headed by the Walled City of Lahore Authority (WCLA), in collaboration with the Aga Khan Trust for Culture and other development agencies.

However, their efforts pale in comparison to the concerted ones made by the Moroccan government to rehabilitate the countless medinas in the country. Interior Lahore is also a much smaller affair, a meagre 2.6 sq km swath of land compared to Marrakech’s 11.1 sq. km medina. There is more that still needs to be done to revitalise androon shehr, and cities such as Marrakech are a great case study to learn from.

Tourism has played a pivotal role in the medina’s rehabilitation, whether as a direct effort by the government to promote tourism and commerce, or as a consequence of the resulting gentrification. This becomes evident from the variety of economic activity happening there: multitudes of restaurants cater varied cuisines; luxurious spas, and hamaams offer services to weary travellers to indulge and relax; numerous riads (somewhat like havelis) provide comfortable and luxurious accommodations, shops in the souks sell artisanal handicrafts -- carpets, jewellery, bags, ceramics, and the like -- to haggling tourists, skilled artisans labour away in their workshops on said handicrafts; local bakeries offer sweets and bread; roadside stalls offer juices or delicious cheap food; henna artists set up in the square to tattoo tourists; snake charmers and monkey wranglers use their animals as attractions; and the numerous fruit and vegetable markets where the locals grocery-shop; all are present in the sprawling medina.

By granting private enterprises the opportunity to set up businesses creates an environment that attracts tourists and customers, which in turn promotes local, established as well as newer businesses.

It is important to incentivise the preservation of heritage and have regulations and policies in place to ensure the historical and social fabric of the area is maintained. Otherwise, if left unchecked, the very gentrification intended to help the locality can end up consuming it entirely, driving residents out due to disparity in income, economic opportunity, and affordability.

One of the problems the medina of Marrakech faces to this day is real estate price hikes. Riads end up being bought by foreign investors who renovate them into holiday homes or hotels, resulting in a reduction of available property. This drives many residents who have been living here for years to the peripheries of the greater city where rents are cheaper. Those who remain end up in homes repurposed by illegal constructions: either more living spaces are added on the roof or the homes are subdivided into smaller units to cater for more tenants. These constructions end up using sub-par materials and techniques which take away from the heritage as well as the structural integrity of the building.

Incidentally, the issue exists in both the medina and androon shehr. Realising the need for equitable rehabilitation led the Moroccan government to establish the Initiative Nationale de Développement Humain whose aim is to rehabilitate not historic landmarks -- which had been the mandate of previous initiatives -- but focus instead on the preservation and social uplift of buildings and areas of historic value. Perhaps, it also helped that the entire medina is listed as a UNESCO World Heritage site which gives an added incentive for such initiatives.

However, there still are areas of the medina in Marrakech that are derelict and income disparity prevalent. A dynamic is formed where the shop owners use aggressive tactics to sell their wares to customers, where the locals help out tourists with directions only to later ask for money, some people resort to begging, and young teenagers try to discreetly sell hashish.

A deeper dive into the economic lives of the residents sheds some more light on the issue. Most have blue-collar jobs either in the medina or out in the city, making barely enough to support themselves and their families. In the case where there is no minimum wage or job security regulations, this can lead to the exploitation of labour. As many businesses are primarily invested by people living out of the medina, the profits do not end up being invested back in the area. This is the ugly truth of gentrification that cities the world over are struggling with. Proper regulation and planning are required to create an equitable economic and social policy.

To that effect, the WCLA can learn from these methodologies and outcomes to form a holistic approach of rehabilitation where heritage preservation is part of a grander policy involving economic regulation and social uplift.

In longer term, the WCLA could even become a model for other such heritage rehabilitation initiatives in cities like Rawalpindi, Multan, Karachi, and others across the country.

Pakistan is a treasure trove of beautiful and diverse heritage. It is important that we invest in preserving and restoring our heritage but not just for the sake of aesthetics, beauty, and economic potential. By embracing traditional and cultural knowledge of our architecture and urban design we can begin to contextualise new methodologies with these frameworks and create robust solutions that preserve heritage and also fit better into our social fabric and environmental and climatological context.

A tale of two medinas