Staring bleakly at a blank screen, the blinking cursor as impatient and accusing as a tapping foot. Sky and spirit both darken; the screen remains incriminatingly bright, unmarred by text. A regular writing day 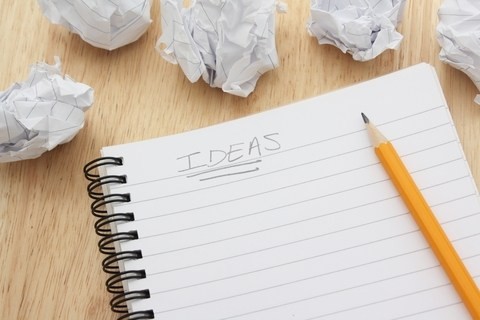 James Joyce wrote his books in bed, it is said, flopped over on his stomach. He wore a white coat -- yes, in bed -- and scribbled his words on scraps of cardboard with pieces of blue crayon; two well crafted sentences a day was a full day’s work. If this sounds appallingly decadent, and exactly the sort of life you imagine novelists lead, consider this: he was almost blind -- the crayons helped him see what he was writing; the white coat helped reflect more light onto the page at night.

Perhaps this is merely apocryphal, but process stories such as these -- Balzac drank 50 cups of coffee a day; the German poet, Schiller, would get high on the aroma of rotten apples in order to write -- abound in the literary universe, if only to shame lesser writers like me, staring bleakly at a blank screen, the blinking cursor as impatient and accusing as a tapping foot. Sky and spirit both darken; the screen remains incriminatingly bright, unmarred by text. A regular writing day.

I hate writing. I love having written. Perhaps Joyce stared despairingly at his cardboard scraps too. Perhaps he stared down his abyss, feeble vision notwithstanding, while I give up too early: avert my bleary eyes and slink off to bed. Perhaps I am too weak-willed for this life. Perhaps I need stronger coffee. Perhaps I need putrid fruit in a bowl on my desk. Perhaps I need to go to writing school, that wholly postmodern phenomenon derided and championed in equal measure.

You can’t be taught how to write, goes the most common lament against creative writing programmes; an equally common criticism, somewhat paradoxically, is that the output of MFA graduates tends to be depressingly similar: over-stylised, devoid of historical consciousness. The formal writing programme produces writers who write for other writers, as opposed to a wider audience; this is to be expected, the criticism continues, if you professionalise what is often considered to historically have been a fairly laissez-faire vocation.

Structure kills creativity is the underlying argument: the author, Eric Bennett, who attended the Iowa Writers Workshop, wrote in the excellent collection MFA vs NYC that the programme was like "a muffin tin you poured the batter of your dreams into. You entered with something undefined and tantalizingly protean and left with muffins."

A confession before I attempt to argue otherwise: a regular writing day does not involve looking at a blank screen all day. It involves doing just about anything else I can before I muster up the courage to face the screen. (This is why Hemingway reportedly advised wrapping up a writing day mid-sentence, so that you can plunge right back into the flow the next morning).

This is a problem, says the poet, Mary Oliver, because writing is a courtship between the heart and the mind: "If Romeo and Juliet had made their appointments to meet, in the moonlight-swept orchard, in all the peril and sweetness of conspiracy, and then more often than not failed to meet -- one or the other lagging, or afraid, or busy elsewhere -- there would have been no romance, no passion, none of the drama for which we remember and celebrate them. Writing a poem is not so different -- it is a kind of possible love affair between something like the heart (that courageous but also shy factory of emotion) and the learned skills of the conscious mind. They make appointments with each other, and keep them, and something begins to happen. Or, they make appointments with each other but are casual and often fail to keep them: count on it, nothing happens."

Read also: The province of the fearless

Great, I thought, when I first read this: if love was conducted the old-fashioned way, I would’ve failed at that too. But Oliver does cleverly complicate the conventional structure-versus-creativity binary. Perhaps the true value of a writing workshop or an MFA is just that: a promise that you make to yourself, to keep showing up -- a commitment device, in the parlance of economics. Perhaps the mind will learn some things along the way, about adverbs and second-person narration and the banality of echoing dialogue, (and perhaps you might have to eventually unlearn a great deal of things, as one often needs to with formal education) but mostly it is a great, grand gesture towards the heart -- or soul, or whatever part of the psyche it is that produces writerly magic. I’m here now, heart. Your turn -- show me what you’ve got.