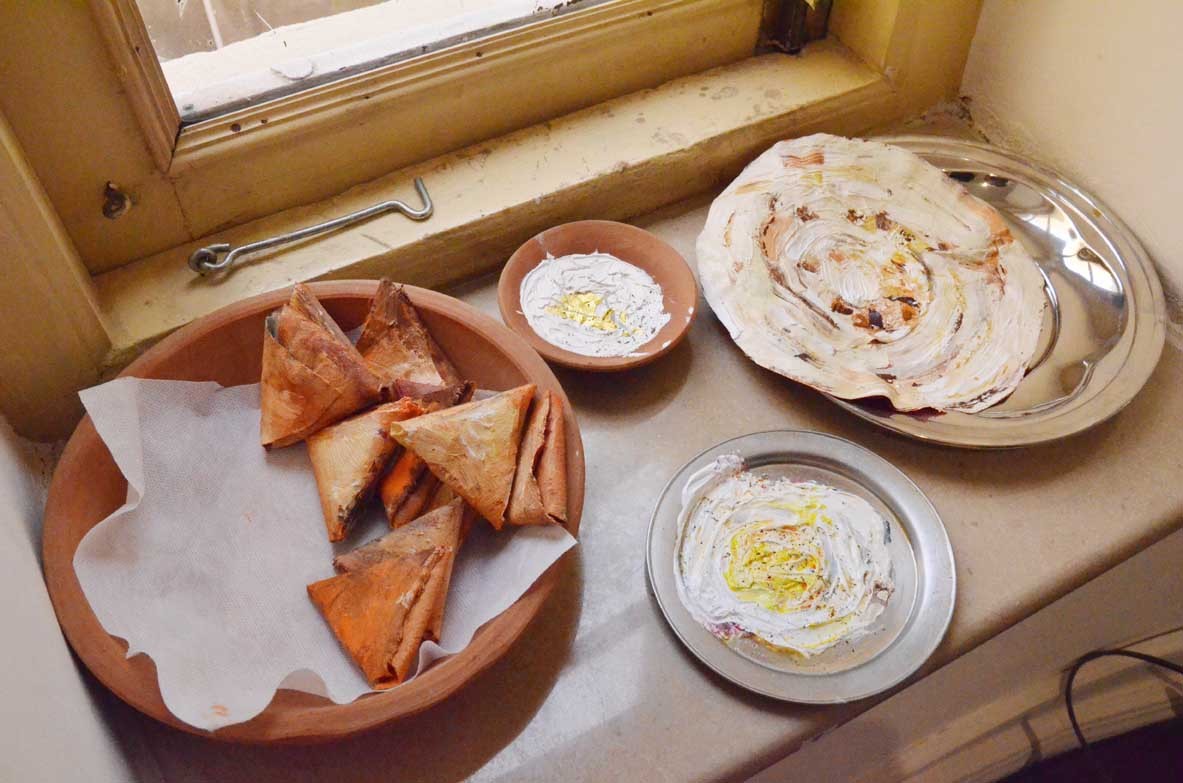 Vasl Artists Association’s 10th edition Taaza Tareen Residency (March 4-April 15, 2018, Karachi) had a clear agenda. ‘Bijli, Pani aur Gas’ was the title of this year’s residency in which four recent graduates from NCA (2018), BNU (2017), and KU (2015) participated along with Arsalan Isa, the writer in residence.

Selected on the basis of their proposals, they worked on the theme of electricity, water and natural gas, resources crucial in the current context.

Maryam Arsalan, Sabeen Ahsan, Mujtaba Asif, Rahman Zada produced a range of objects which illustrated the state of a country, city and neighbourhood. Impressive for their diversity, seriousness, formal sophistication and interesting ideas, their works confirmed how the often-churned words such as ‘energy’ and ‘natural resource problem’ can still be the subject of art.

Asif’s work had direct link with the premise of the Residency. He created a kind of laboratory, in which medical trays contained waters from different districts of Karachi. The liquid was so polluted that after a few days tiny insects started to appear in these samples. He painted on the lids of these metal utensils, and added visuals and texts inside of trays. The artist fabricated a fictional world, a verbal story, related to his concerns.

Other participants approached the theme not so literally, often reverting to their previous practices. Maryam Arsalan displayed images of food -- a convincingly manufactured edible stuff. Sabeen Ahsan produced large and small pieces in shades of dark hues, using carbon papers and other materials. Her work, with its flowing forms, streaks of colours and serenity of surface could be connected to water, but these also existed independently as intriguing and sensitive surfaces.

Rahman Zada extended work from his degree show at NCA, and made miniatures, instillations, and switch boards and sockets fabricated with Wasli paper. His work announced its genesis in the electricity crisis, and offered clusters of cables (of all kinds), paintings with poles and wires. But a small video piece indicated a new sensibility. From the socket made of paper, you could see footage of a moving ceiling fan. The article that is controlled by a small socket was ‘literally’ contained in it!

As expected, the artists chosen for this residency created works on and around the theme. But looking at their works, one ponders upon the necessity of a ‘narrative’ or purpose, rooted in civic, social, economic and national problems. The whole exercise was commendable since it forced the artists to step out of their limited sphere of galleries, collectors, curators and critic and to research and reflect on issues which are important for the larger public.

Although some participants did not follow the theme in its orthodox scheme, but even so they prepared their proposals. This is not much different from how the viewers of an art exhibition often press the artists to explain, rather justify, their art pieces; in turn, the artists hold forth about their subject having political, social and ethical relevance. Thus the viewers are satisfied that art does have a content and purpose.

Often, visual artists are expected to ‘represent’ their community for another set of viewers in a different city or country, even if they no longer live under those conditions. Thus, artists from Balochistan and tribal areas paint atrocities, death and destruction due to militancy. Their work is appreciated in the art circles of Lahore, Islamabad and Karachi. On the contrary, artists who still reside in those turbulent areas paint flowers, figures and landscapes.

Then there are artists who use tradition, heritage, violence, etc., to sell their art in the international market. But why blame those who are enjoying great success for their images of violence, even if they are safely situated far from the site of violence? Because, each generation of artists needs a narrative for making a niche in the mainstream art. Before 9/11, it was gender oppression, then came violence and bloodbath in the age of War on Terror, and now it is spirituality and Sufism making inroads into the western art market.

The question, a moral one, is that should we discourage, denounce or discard an artist for selling one or the other ‘marketable’ idea to varied audiences? In most instances, this body of work has become a legitimate part of our art history. However, notwithstanding the level of success, acceptance and appreciation, one should accept that whatever the noble cause, in most cases, artists are not directly or remotely affected by it. Yet they pick these sensible subjects, often to allure or enlighten the audience, whether it is gender invisibility, spreading violence, or failure to provide electricity, water and natural gas.

The artists could learn from the example of Lala Rukh who fought for gender equality all through her life, but her major work had nothing do to with this ‘theme’. Instead, it was more about the poetic representation of places, minimal depiction of human figures and memories invoked through these encounters. Lala Rukh was sincere to her cause in a true sense and to the cause of art too; without mixing, merging or manipulating the two.