In the picture! The greatest movies you have never seen 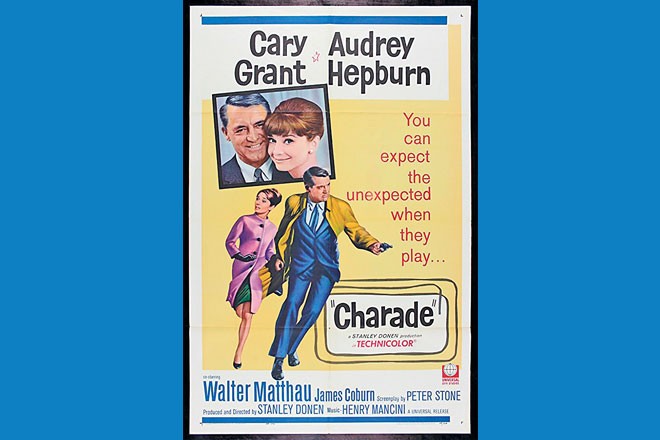 It has often been called "the Greatest Alfred Hitchcock Movie that Hitchcock never made." The set up, after all, is pure Hitchcock: A man is thrown off a train and killed. His wife (Audrey Hepburn) finds out that he was not who he claimed to be: he had several identities and was a thief who had stolen a fortune and double-crossed his partners in crime. The fortune is nowhere to be found and the partners and others (including Cary Grant) come after the said wife believing she has access to it.

Cue, suspense, thrills and many more bodies dropping dead. Yet, Charade (1963), helmed by the legendary director Stanley Donen, not famous for thrillers but famous for musicals such as Singing in the Rain and Seven Brides for Seven Brothers, is a compelling suspense-thriller with a romantic-comedy twist.

This is probably a movie that Hitchcock possibly with his continual tone of darkness could never have made. The three genres of romance, comedy and thriller really should not work together; yet, director Donen makes the three work a charm.

Donen infuses the movie with great wit and heart, and along with compelling acting and suspenseful plot twists, the movie is an underrated gem.

The cast is sterling: Audrey Hepburn and Cary Grant light up the screen in the leads and are brilliantly supported by James Coburn, Walter Mathau and George Kennedy, each bringing varying degrees of menace or comic relief to the proceedings. The sights of Paris provide the backdrop. The musical score by Johnny Mercer and Henry Mancini was nominated for an Academy Award. Production values mark a Golden Hollywood era well past now, an era where elegance was more enticing than the crass vulgarity of the present day: Audrey Hepburn in Givenchy dresses and Cary Grant with his sartorial elegance sent a benchmark never equaled.

The dialogues by screenwriter Peter Stone (Father Goose, Taking of Pelham 123, Arabesque) are memorable and the banter of the leads is effortless. Consider this exchange from when Grant and Hepburn first meet:

GRANT: Is there a Mr. Lampert?

GRANT: Good for you.

HEPBURN: No, you see, I don’t really love him.

HEPBURN: Is there a Mrs. Joshua?

HEPBURN: Oh.  Well, wasn’t it Shakespeare who said: "When strangers do

meet they should erelong see one another again"?

HEPBURN: How do you know?

GRANT: It’s terrible -- you just made it up.

At another time Hepburn observes, "I already know an awful lot of people and until one of them dies I couldn’t possibly meet anyone else." Grant retorts, "Well, if anyone goes on the critical list, let me know."

While the film races along with great dialogue and acting, there are also moments of menace that disturb and shock. Without giving much away, a couple of the partners in crime are particularly terrifying with George Kennedy sporting a menacing claw and James Coburn petrifying Hepburn with just a couple of matchsticks. The handful of deaths that litter the movie are graphic, and often jar one out of the pleasant Hepburn-Grant repartee. For all its body count, it is a film with heart. The film has some decent twists as well which I won’t spoil by discussing.

As mentioned earlier, much of the success of the movie is because of the chemistry of Hepburn and Grant. Curiously, as was the case throughout most of her career (with Rex Harrison in My Fair Lady, Gary Cooper in Love in the Afternoon, Humphrey Bogart in Sabrina, Fred Astaire in Funny Face) Hepburn is paired with a much older male lead. The age difference between the two leads (Grant was in his sixties, Hepburn in her thirties; he slyly comments ‘I could almost be arrested for transporting a minor above the first floor’) is overcome through wit and interesting script choices. Reportedly, Grant had because of the age difference rejected the script, but the scriptwriter got him to accept simply by changing all the aggressive dialogues over to the Hepburn character, which made her predatory and not him. Like Hepburn, the film may be a relic of a more chaste time. Hepburn is not sensual but ethereal and heart-stealing with great comic timing. This is the type of a movie that Hollywood can’t make anymore since true star power and charm is at the heart of the chemistry.

In the end, it is also worth reporting that this film is now in the public domain, due to the failure to put the then-required copyright notice in the released print. Filmmakers can for example do worse than making a word for word translated remake. It was tried in English in 2002 with the The Truth About Charlie (starring Mark Wahlberg and Thandie Newton) but that lacked the charm of the original. You dear readers can make do by downloading the original legally off of torrents or watching it for free on YouTube.

Overall, for the film races through its many twists and turns in under all-too-brief two hours, but the movie leaves one smiling and fully entertained. It bears repeated watching as well and remains a timeless, if underappreciated, classic.

In the picture! The greatest movies you have never seen