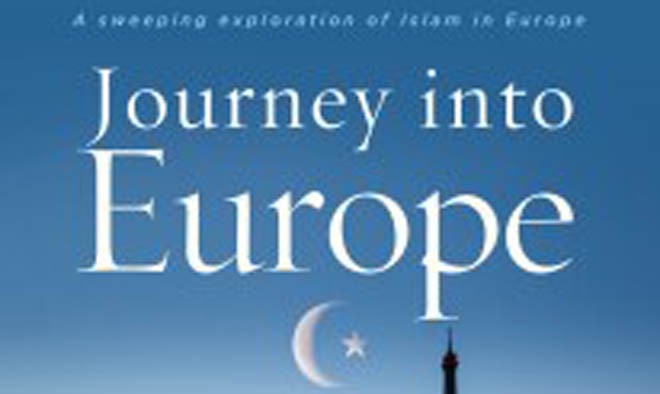 Former ambassador Akbar Ahmed is the Ibn Khaldun Chair of Islamic Studies at American University Washington, D.C. He is former Pakistani High Commissioner to the UK and Ireland. Professor Ahmed is named "the world’s leading authority on contemporary Islam" by the BBC. He is the author of several books on Islam and Muslim identity and has written extensively on Muslim identity in the West.

In the words of Noam Chomsky, who praises Akbar’s latest book, "His latest study, based on direct research with a group of young scholars, explores the complex interfaith reality of Europe, both in history and today, from an Eastern perspective, reversing the familiar paradigm. It is sure to be yet another influential contribution, one greatly needed in a world riven by conflict and misunderstanding."

Journey into Europe is Prof Akbar’s monumental work that focuses on not just Muslims who have been, this way or the other, the centre of attention of many western writers but the west itself. Noam Chomsky rightly said that this is the reverse paradigm. So far East and Muslims in specific have been studied as a subject and West has been the explorer but Akbar has changed it. This is a book that attempts to study and understand patterns of social developments taking place in European countries; European identity, the roots of modern European society and its approach towards Islam, by an individual whose roots are outside Europe.

The book is a combination of travelogue as well as research work. Akbar meets people along the alley ways of Cordoba overlooking beautiful gardens. He meets them in the Spanish parks, mosques and at times in underground worship places of Athens where the Muslims are in thousands but do not have a proper mosque, a place to worship. He finds Muslims in nooks and corners of Paris and Denmark and starts conversations that unfold the condition of Muslims and their experiences in Europe. That’s not it. He interviewed many non-Muslim academics, priests, politicians and Rabbis.

The book is a collection of his observations, interviews and meetings during his travel. Yet, it is as scientific as it can be. Akbar’s travels have the sentimentality of a Muslim who feels the pain of his fellowmen when he says "Yet if I did not give them some hope, I would be failing my fellow Muslims by not comforting them". There is always a humanistic approach, "I felt empathy for the immigrants whose only crime was their frantic need to seek refuge abroad for their families and themselves from the chaos and persecution at home", a familiar sentimental touch to an Akbar reader that can be seen in his previous works as well. This association with his subject is probably what makes his works more humane and more relevant as compared to the new trends of research which have somewhat mechanical overtone.

The book is about Europe, as much as it is about Islam. Akbar’s approach doesn’t tilt towards either, "Muslims were not learning lessons" he says while meeting a group of Muslims. "They had brought their sectarian and ethnic rivalries with them." Therefore, Akbar’s delves into understanding Europe’s approach towards the immigrants most of whom are Muslims. This approach varies from country to country. And how much the Muslims have been grasping the European values. When such questions come up, Akbar dives further into in-depth understanding of what Europe actually is? What do we mean when we say European? He takes the reader on a tour to the European social and cultural roots and how that has shaped the modern Europe?

Akbar’s methodological framework for his study combines both Max Weber and Ibn-e-Khuldun; both the titans of their own times and societies.

Akbar holds that European society still has strong tribal traits -- a society that has perhaps evolved but still holds the very archaic and remote Germanic values. These tribal Germanic values are the basis of modern European identity, which also keeps the notions of ‘us’ and ‘them’ alive and relevant in Europe.

The study starts with Tacitus, the first anthropologist of Germanic society. According to Akbar, Tacitus, who predates both Weber and Khuldun, provides the baseline, extant text and conceptual framework to examine Germanic tribal identity. Tacitus’ description of German people as tribal was shared by none other than Julius Caesar, who is widely credited with giving the name "German" to them. The modern nations like England, The Netherlands, and the Scandinavian countries are indisputably Germanic in origin and other European countries too claim links. French identity incorporates Clovis and Charlemagne, both mighty Germanic warriors of the Frankish tribal confederation that gave France its name. Italy claimed Aryan identity based on Germanic tribes, Spanish aristocracy claimed descent from German Visigoths.

Tribal Europe, according to Akbar, has been over the centuries influenced by Christianity, feudalism, monarchy, foreign invasions, long drawn out religious wars, imperialism and overseas colonisation and finally modernisations. These developments, Akbar argues, have tempered the tribal identity, but they have not removed them altogether. What has happened is that the tribal identity has evolved and adapted to the changes occurring. Just like in the modern day states in the East; Saudi Arabia and Afghanistan; both named after tribes, Europe too carries the names attached to tribal identities.

Akbar’s view and insight is deep. He sees the continent’s dark history of twentieth century’s massacres, colonisation and wars. He also keeps into account another Europe; the Europe of Shakespeare, Goethe, Mozart, Da Vinci and Cervantes.

In his book, Akbar divides his study of Europe in three categories. The first one is primordial societies that value their own unique traditions and cultures. Second, predators’ identity of those societies that promote their identity through chauvinistic, aggressive, and militaristic expressions. The third one is pluralistic society.

Akbar sets on a voyage to explore and discuss all three categories of European identity. He elaborates the cultural traits; Volk, Hiemat, Aryan Race and Hygge, of the German tribes scattered all over Europe. He further traces the ancient symbols of Germanic tribal identity like forest, Oak and Wolves that are still used in modern day stories and everyday life of European society.

Akbar Ahmed, while tracing the European tribal identity, links Muslims and the approach of European societies towards Muslims. He keeps into account that Muslims too come from different societies, which are mostly tribal, having their own identity and traits.

Akbar Ahmed’s study of both Europe and Islam is a tour de force. His book has set new standards and opens new dimensions to the debate related to both Islam and the European society. Each Chapter of the book opens a new world of information and understanding. The book is a page turner with an excellent pace of discussion and debate. The depth and width of Ahmed’s knowledge of his subject and societies as a scholar never ceases to inspire his readers. The book is a monumental work that needs a careful study to better understand modern day Islam and as well as Europe.