Cyclist on the roar 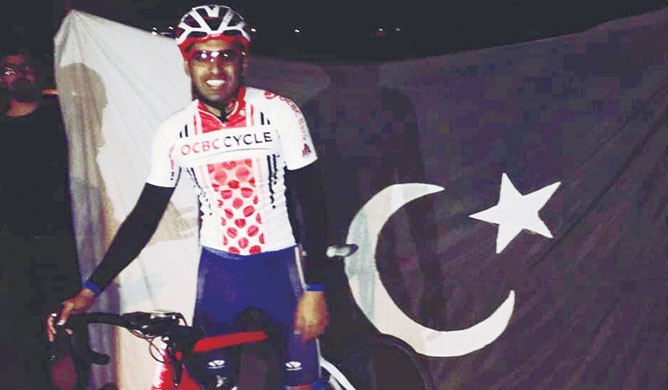 March 18th of this year was a significant day in the history of Pakistan cycling, as a young cyclist Captain Nadir Khan became the first Pakistani and only second South Asian to undertake the first-ever "Everesting" by cycling continuously for 22 hours, covering 237 km and an elevation of 9150 meters.

The International Everesting Record-keepers have verified Nadir’s record on their official website.

Nadir’s efforts, grit and determination were lauded when he completed the 235 repetitions at the designated hill, burning 14,000 kilocalories with non-stop cycling.

Such feat of grit and endurance had not been known before from a Pakistan cyclist.

Nadir, a graduate of NUST University, is a mechanical engineer. Being part of Pakistan Army’s cycling team, Nadir was selected by Pakistan Cycling Federation (PCF) to take part in advanced cycling training in Malaysia in November 2017.

With his slender physique and enormous stamina, Nadir often rode to Murree and to Lahore from Rawalpindi.

With his technical background, natural ability and burning passion for sport, PCF expects a lot from this athlete. His plans for the future include earning a professional contract from any continental or pro-continental team. Nadir wants to follow the footsteps of those brilliant Army athletes who not only served Pakistan Army with distinction but also earned respect in international sports.

Nadir while talking about the scope of cycling in Pakistan said that it is a "Walking Billboard", with numerous branding opportunities and it is the most appropriate sport to promote tourism in any country.

Nadir said that Pakistan has potential to host international cycling events and even beat the famous Tour-de-France. He said that if the government and corporate sector joined hands and security agencies provided the necessary cover, there could be an international mountain cycling event from Gilgit to Khunjrab or Skardu to Deosai.

A similar event can be organised on coastal highway from Karachi to Gawadar. The potential of sport and its commercial and cultural impact along with nation-building exercise can be well gauged from the recently concluded Pakistan Super League (PSL) and T20 International series against the West Indies.

With this successful model, Pakistan can now venture into new sports activities, including cycling, and project Pakistan’s soft image abroad.

Cyclist on the roar