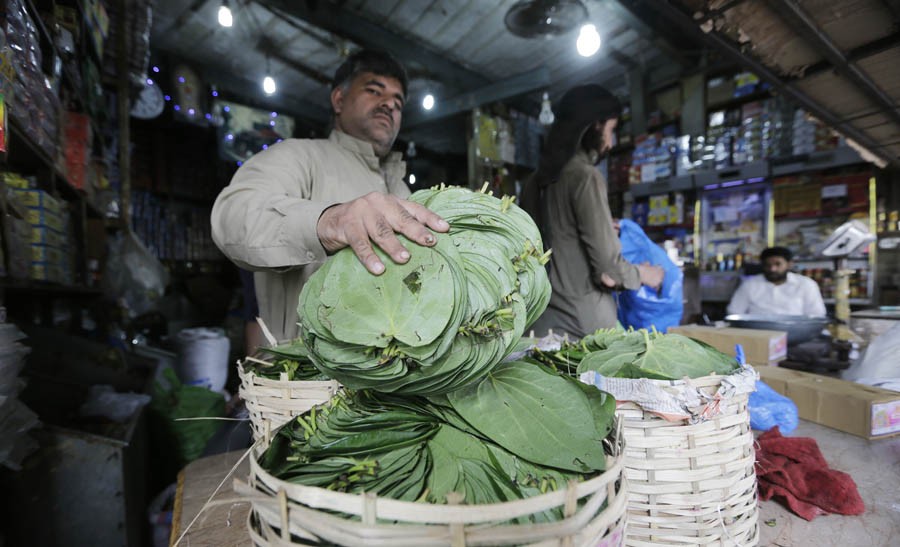 At a busy crossroad near Texali Gate around midnight, one sees a couple of people, standing next to a paan shop, with shutters down and a banner hoisted at a reasonable height. The banner says that all government efforts aimed at depriving paan shop owners and dealers of their livelihood shall be strongly contested.

There is also a condemnation for the Punjab Food Authority (PFA) for giving a deadline to ban chhaliya (crushed beetle nut) and chewable tobacco -- the two integral and irreplaceable components of the traditional paan. The reason offered by the scientific panel of the authority was that these are harmful for human health.

The shop is closed but surprisingly customers can be seen approaching the men standing at the spot, at a close distance from each other. The customers engage in a brief conservation with these men before exchanging money with small packets the latter draw from their side pockets. At times, there is an argument about the high price charged for the product, but most often the customers accept whatever is asked from them and leave.

In fact, the men present here are working for the shop owner and selling different varieties of paan to the customers approaching them. The shop has been shut down in protest and to show that it has become nonviable to run this business due to the looming ban announced by PFA on these ingredients of paan. Besides, it is claimed there is a verbal instruction to the police not to allow paan shops to remain open till late at night due to security reasons. These people sell paan at exorbitant prices and keep the margin of profit for themselves as well as to accommodate policemen patrolling the area.

Though the ban has not yet come into force, there is a severe shortage of the said items and a steep escalation in their prices. For example, the price of chhaliya, which was around Rs300 per kg before the PFA had intervened, spiked to Rs4,000 per kg before coming down to Rs2,400 kg recently. This led to a sharp increase in the price of paan which was at one time even sold for Rs100 per piece.

Maqsood Ahmed, a commercial van driver and habitual paan eater, says he can survive without food and water but not paan. He adds that there is no concept of paan without chhaliya (chewable tobacco) and those consuming the likes of meetha paan or chocolate paan are, in fact, insulting this traditional edible.

Ahmed has not discontinued consumption of paan but cut it down to three a day -- from six -- because of the high prices. The shop owners, on the other hand, have trebled the prices and reduced the quantity of chhaliya and tobacco they wrap in beetle leaves. "Some of them [shop owners] are even adding uncooked corn kernel to chhaliya, in order to give the impression that the quantity has not been reduced."

"The reason why its price has come down is that the smuggled chhaliya has reached local markets. This has also caused a fall in the revenue collected by the govt from its lawful imports."

Traditionally speaking, paan has been consumed for centuries in this region. It is seen as more of an addiction than a habit. Paan eaters swear it is harder to quit than cigarettes; those trying to do so suffer from withdrawal symptoms.

Fortunately, many of them believe that certain ingredients of paan are harmful to health but insist it should not be banned rather regulated, just like cigarettes.

Waseem Ali, President, All Pakistan Paan & Tobacco Association (APPTA), tells TNS he is trying to convince the PFA to reconsider its stance and pay heed to the recommendations forwarded to them. "We’ve suggested that we are ready to print health hazard warnings on chewable tobacco packing, the ways it is done on cigarette packets. Similarly, we can ensure there are no alpha toxins (toxins produced by bacteria) in betel nuts imported from India, Indonesia, Malaysia, Thailand, and other countries, as is the objection by the authorities. Our quality is above the mark.

"Furthermore, we’ve said that we could import chhaliya in terta packs rather than in loose form, to avoid its contact with air and subsequent contamination."

He says that the deadline has passed and a meeting with PFA has been planned. "But we hope that there will be a positive outcome."

He also rejects the notion that chhaliya causes oral cancer, "The government has taken the step so as to reduce trade gap with India which exports chhaliya worth billions of rupees to Pakistan. Chhaliya, imported lawfully by Pakistani traders, is held by customs authorities while the smugglers continue to have a field day. The reason why its price has come down is that the smuggled chhaliya has reached local markets. This has also caused a fall in the revenue collected by the government from its lawful imports."

Noorul Amin Mengal, Director General, PFA, insists chhaliya and chewable tobacco cause deadly diseases of mouth, throat, stomach, and so on, as claimed by the highly qualified scientific panel of the authority.

He confirms that the traders have put forward suggestions like moving to the packaging regime and printing warning messages on packets etc but these are under consideration and no decision has been taken so far.

"The PFA has issued warnings related only to harmful items like chhaliya and tobacco. The problem arises because these are an integral part of paan, a fact that hurts the whole paan selling sector if the ban is imposed."

One of their pleas, according to Ali, is that any provincial government or authority cannot ban an item that is imported legally into the country. "If chhaliya is to be banned, the government of Pakistan shall have to declare its import illegal. This is unlikely because it collects huge customs’ duties from this import."