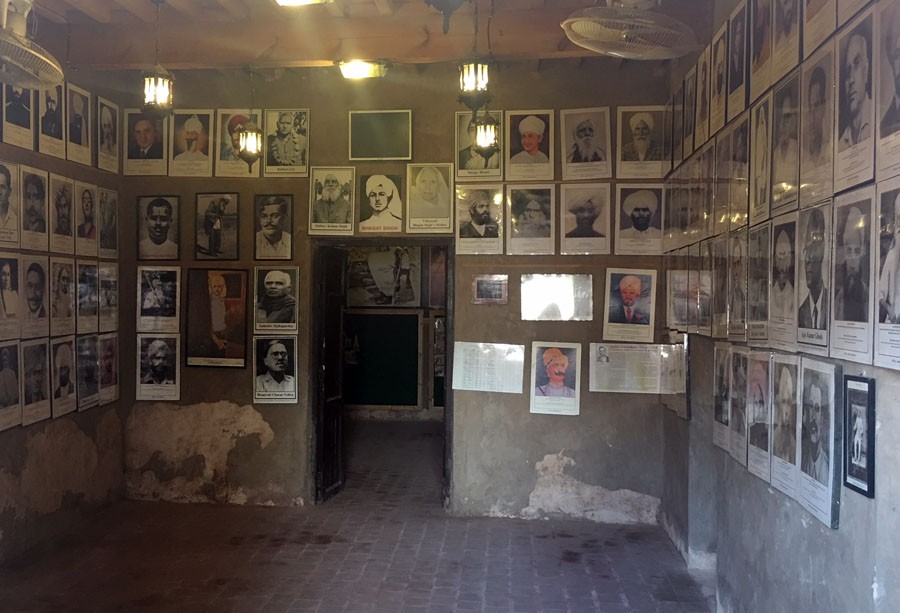 Amidst lush fields in Banga, in Chak 105, Tehsil Jaranwala, lies the brick and cement pastoral house where Bhagat Singh was born over a hundred years ago. On March 23, this was a busy place, because it was his 87th death anniversary.

Banga is two hours’ drive from Lahore and some 40 minutes away from Faisalabad. Once here, you can feel Punjab’s iconic sunshine that ripens the harvest, see the wheat crops, and smell the fresh cow dung stacks outside the houses.

The village is located right in the midst of the fields, and there is a bumpy road leading to it. Some of the village houses are "pakka" (as they say in Punjabi) -- they have a pink, yellow, white or peach exterior, and are colourful and modern. There are a few vehicles and many cycles moving around.

Banga retains a very authentic countryside vibe, probably not much different from what it was in the pre-partition times. If Bhagat Singh walked back into his village today, he will not only recognise his hometown but also find his house relatively intact.

Singh’s house is at the end of one of the streets. One has to keep going in a tiny offshoot of one of the newer houses to find a board announcing his name in English: "Bhagat Singh Shaheed Sindhu." You also find a photo of him sporting a pagri. There are banners all around the house, even in the room he was born in.

Below the ground level is the structure with two rooms and no windows. On the right of the house is the berry tree said to be planted by Singh. It has been kept well and is deeply revered by the visitors. Some visitors read holy verses here, and even collect the soil as a keepsake.

A staircase with a few steps takes us to the two rooms where Singh spent his early years. The house is now owned by Saqib Virk, a middle-aged man who inherited it from his father. It was originally allotted to his grandfather, a noted hakeem in pre-partition Gurdaspur, India. Virk spends a lot of his time managing this property which he has tried to keep as close to what Bhagat Singh experienced as possible.

The backyard corner of the house used as the kitchen has not been modernised or redone. There is still a tiny stove, heated with wood lying here. It is now used by Virk to make desi foods for the many guests who arrive at odd hours.

Virk is full of stories about Bhagat Singh which he loves to recount in Punjabi -- they are sometimes not factually accurate but always enthusiastically recounted.

The brick rooms are said to have the same walls and basic structure as were left behind by Singh’s family. But the walls have been refurbished, along with the floor. They now have cement surface. The roof has been replaced because the original one was destroyed. Some of the restructurings have been done with the help of the Punjab government.

A sticky and crudely designed banner of Singh is tacked on a wall outside a room. It is dark inside, as there is no window. The yellow bulbs hanging from the roof are too dim to light up the room. The walls have photos of the Sikhs and a handful of Muslims related to the freedom movement. This room is dedicated to those fighting the British to rid India of colonialism and not those who were part of the Pakistan movement as is often the case in the country.

The two rooms are now preserved as a museum. They have photos of the young Singh and his parents. Some of the revolutionaries like Chandrashekhar Azad, BK Dutt, and Sukhdev Thapar’s photos are there too. These are copies of the photographs collected from across the diaspora, mostly donated by the poet Amarjit Chandan who travelled across the world collecting copies and originals.

Some of the photos are of the freedom fighters’ mothers and wives. Most of them are black and white, grainy images, scanned and enlarged. The frames have been donated by the singer Jassi Lyalpuria and each one of them carries his name at the bottom, in large and bold capital letters.

In the second and smaller room where Singh is said to have been born, there are large images of him stuck on the front wall. One of the photos show him meeting DSP Gopal Singh Pannu in the Lahore Central Jail. Another is a painting of him in the jail, doing what he loved best -- reading. His feet are chained in both the images, and he sits as a lanky figure with his hair tied in a bun on the top of his head. You can also see a charkha that is said to belong to his mother, and a slab that was there in 1947 stating in Urdu that this is Bhagat Singh’s home.

The rest of the building has been reconstructed. Even the walls in the backyard where they have kitchen corners have been renewed.

There is a house with some bedrooms right next to the Bhagat Singh establishment where guests can stay the night. When I visited the place, Virk had arranged saag which he said had taken over a day to cook, and makai ki roti, made on the wood and clay stoves in what remains of Singh’s kitchen. Perhaps this is where Singh’s mother also cooked chuuri and paratha for him and his siblings.

Every now and then excited children came by on bicycles and gathered around the rooms giggling.

There is a tajori or metal locker where Singh and his family are said to keep their valuables and documents. The locker still serves Virk, who keeps his books and papers there.

The village has still not modernised but when one imagines that Singh who eventually became one of the brightest stars on the firmament of the Indian freedom movement came from this place over a century ago -- his achievements, convictions, and originality of thought appear to be even more incredible.

In the evening, to commemorate Singh’s death anniversary, a brief music programme had been arranged. Pulao, jalebi, hot tea, and fizzy drinks were distributed on the occasion. Children thronged the place in the hope of grabbing some sweets and escaping -- perhaps, much like what the young Singh would have done in his childhood.

A photo of Singh was placed on the veranda, under which diyas (clay lamps) had been lit. People dropped by to take photos next to this, every now and then. The night had fallen, and I too headed out of the village through the same old bumpy road which was also very dark.