The fledgling Afghan Air Force, trained and equipped by the United States, carried out the latest airstrike on a mosque-cum-madrassa in Kunduz 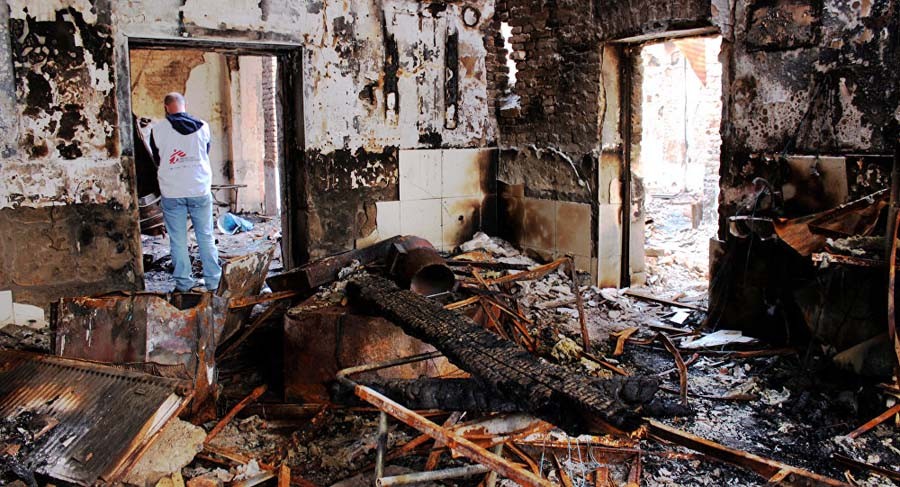 Though all of Afghanistan has suffered death and destruction over the past nearly four decades, Kunduz stands out, as it has endured some of the most devastating attacks, mostly airstrikes, during the ongoing Afghan war.

In October 2015, the US military had carried out an airstrike on a trauma centre run by Doctors Without Borders in Kunduz city that killed 42 persons, including doctors and patients. The Doctors Without Borders termed it a war crime, but the US military in its internal inquiry concluded that it wasn’t a war crime because it wasn’t intentional. Earlier, an airstrike called by German troops based in Kunduz, and carried out by the US had caused scores of casualties, as people trying to take away oil spilling from an oil tanker were mercilessly bombed.

As Kunduz city was captured twice by Taliban fighters in recent years, people suffered huge casualties and displacement in the fight for its control.

The latest airstrike on a mosque-cum-madrassa took place on April 2 in the Dasht-e-Archi district in the northern Kunduz province bordering Tajikistan. The Darul Uloom Hashimia seminary in Daftiano village was hit when a dastarbandi (turban-tying) ceremony of graduating young students who had memorised the holy Quran was underway.

Pictures have emerged on social media of rows of teenagers and even younger boys wearing new, starched white clothes and small white turbans, holding their graduation certificates. It was a happy day in their lives and they had come dressed in their finest to celebrate the occasion. Little did they know that a tragedy was about to unfold and soon there would be mourning all over Kunduz and beyond.

Such ceremonies are a major event in the calendars of madrassas. The students and their teachers have reasons to celebrate the dastarbandi as it is the culmination of a part of the religious education. The families of the graduating students also become part of the celebration along with their relatives and co-villagers. Leading Ulema and notables of the area are invited to the event, but many people, particularly children, come uninvited as traditionally rice and meat is cooked and lunch is served to all those present.

With the summer fighting season about to start and the peace process going nowhere, horrible incidents like Kunduz would contribute to the intensity of the battle and provoke revenge attacks.

Locals who gave eyewitness accounts of the incident have said that up to 1,000 people were present around noon when gunship helicopters began firing at the gathering. There are reports that children were scared and they raised alarm and the possibility of helicopters dropping bombs, but their elders advised them to calm down. The children were right as the choppers rained rockets on those present as if it was a military target.

It has now become clear that the fledgling Afghan Air Force, trained and equipped by the United States, carried out the airstrike. The US-led Nato forces have denied their involvement even though its commanders could have made an effort to stop the Afghan pilots from carrying out the airstrike because Afghanistan’s skies are controlled by the Americans. Increasingly, the Afghan Air Force has stepped up airstrikes in support of the hard-pressed Afghan ground forces battling Taliban fighters. In fact, the air force is becoming the mainstay of the war effort of both the US and Afghan militaries seeking to push back the Taliban, who lack anti-aircraft guns and missiles, to break their momentum in the battlefield. This is cost-effective, aimed at minimising Afghan military casualties and breaking the stalemate on the battleground under President Donald Trump’s new military-focused strategy for Afghanistan unveiled in August 2017.

Though President Ashraf Ghani has formed a commission to investigate the Kunduz incident, his government has already taken a position that the Afghan security forces tried to hit Taliban fighters who had gathered to finalise plans to carry out acts of terrorism. Even if Taliban fighters were present there is no justification for bombing a gathering of civilians. The Presidential office statement referred to reports that Afghan civilians suffered casualties in the airstrike without acknowledging that innocent people, including children, were killed in the incident.

This was almost in line with the Afghan Defence Ministry’s earlier claim that the target was kind of a Taliban training centre and no civilian was present or killed. It claimed that 20 Taliban fighters, including some commanders, were among those killed. It even mentioned words like the Taliban’s elite "Red Unit" and "Quetta and Peshawar shuras" to give credence to its claim that important Taliban figures belonging to these Pakistan-based entities were present there at the time of the airstrikes. Subsequently, the Afghan Defence Ministry even issued a list containing names of Taliban members who were present at the madrassa and were killed in the attack. It would be futile to expect a fair and credible investigation by a commission comprising Afghan government officials and headed by a senior intelligence agency official, Khudaidad Hazara.

The confusion in the Afghan government ranks following this terrible attack soon became evident when a spokesman of the Kunduz governor conceded that five civilians were killed and 55 more injured in the airstrikes. He thus contradicted the Afghan Defence Ministry’s claim that no civilian was present at the site of the incident nor anyone had been killed. The spokesman had made the statement not long after the incident and subsequently the death toll of the civilians kept rising until figures of 150 and even 200 were mentioned. Three days after the bombing, precise figures aren’t available and it is obvious the government doesn’t have a strong physical presence in the area as it is controlled by the Taliban. The figures of those killed were initially stated to be 70, then 100 and above depending on who was being quoted. Taliban spokesmen gave a figure of 150 killed, claiming all were civilians.

More credible accounts of the incident came from locals who in their eyewitness statements maintained that some armed Taliban were present, but the gathering was overwhelmingly civilian, including considerable number of children. Many termed the government claims as dishonest and demanded a proper and credible investigation. Some of the survivors also rejected government claims that Taliban fighters fired at the civilians after the airstrikes.

The United Nations too has started an inquiry, but if the past is any guide it hasn’t been able to provide justice to those wronged and harmed.

With the summer fighting season about to start and the peace process going nowhere, horrible incidents like Kunduz would contribute to the intensity of the battle and provoke revenge attacks. On the social media there is a very emotional debate going on and it is inflaming sentiments and calling for revenge. The prospects for peace were already low and henceforth even starting a dialogue between the combatants would be a challenge.