The island no one told you about 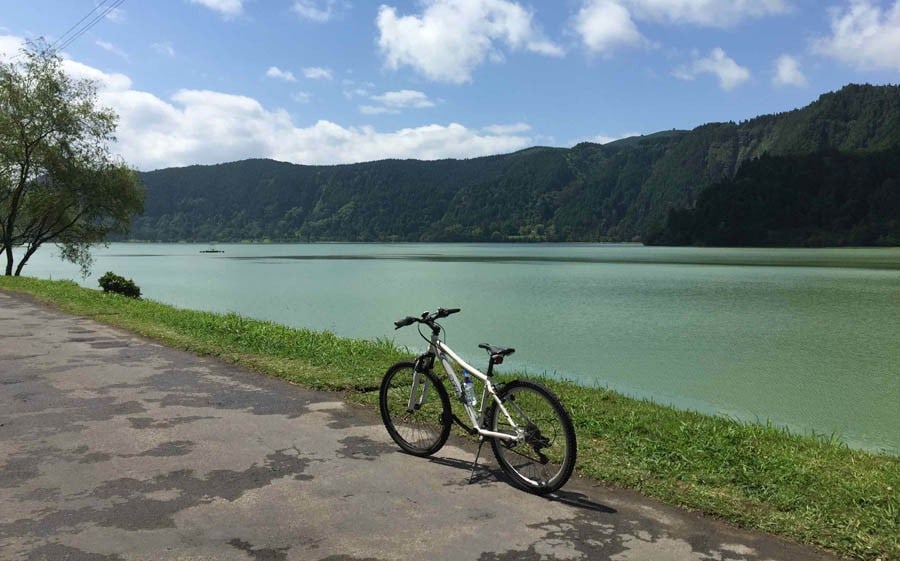 Flying eastwards is often an exercise in loss. You touch down and the air hostess announces local time, letting you know that a few hours of your life have simply disappeared. That is how I felt in the taxi that took us from the airport to the hotel in São Miguel, Portugal. The hour was dawn, awash in its own strain of melancholy. The hydrangeas lining every street moved in the breeze. We sped past shuttered padarias, the hour too early for the sale of bread. Then, suddenly, the car took a turn and we were by a cliff, with nothing to see but the ocean, and the sun rising atop it.

São Miguel is the largest island in the Azores, a Portuguese archipelago in the mid-Atlantic. The islands are home to steep cliffs, volcanic lakes, and a booming dairy industry. Despite being a two-hour flight away from Lisbon, they remain little-known, off the itinerary for many avid European island-hoppers. The legend goes that there are more cows than people on São Miguel, and there is little reason to doubt this. The lush undulating pastures are punctuated often by herds of cows, and every restaurant serves queijo fresco, a fresh cheese that crumbles under the softest touch.

On our first day, we lounged around at our hotel, Pedras do Mar, built on a cliff with a dramatic view of the Atlantic. For dinner, we went to A Tasca, a nostalgic restaurant that prints its menu in the style of an old newspaper. When we told our taxi driver we didn’t have small change, he asked us to simply pay him back later. This was a small, trustful gesture, but also showed us that the island is not yet plagued by the mass tourism that turns locals suspicious of visitors.

The next morning, we visited the site São Miguel is most famous for: Lagoa das Sete Cidades, a twin lake set in the crater of a dormant volcano, nestled on all sides by verdant hills. When the sun is out, both lakes reflect different hues, owing to a variation in depth and ecological environment. Perhaps a more charming explanation comes from local folklore: a long time ago, two lovers who were separated by the tyranny of fate cried enough tears to form two lakes. One of them was green after her eyes, the other blue after his.

When I look back at the Azores, the lakes are what I remember most vividly, their deep colours bright even in memory. For the more adventurous travellers, the Azores also provide abundant opportunities for hiking and trekking. Some people visit in the summer months specifically to swim with the dolphins and go whale watching.

I prefer to travel without breaking a sweat, so I did none of that. We did, however, take a tour of Gorreana, the oldest and last remaining tea plantation in Europe. The small factory left me heady with the smell of cured leaves, but the samples they laid out for tasting were just as meek as the afternoon tea they sell in London’s Mayfair establishments. Tea, evidently, is not a European forte.

The small factory left me heady with the smell of cured leaves, but the samples they laid out for tasting were just as meek as the afternoon tea they sell in London’s Mayfair establishments. Tea, evidently, is not a European forte.

As we drove to the northern tip of the island, I took in the picture-perfect farm houses and hamlets by the sea, leaving niceties to my husband. He is Portuguese by descent and could interact with the local drivers while I sat back, saved from small talk by a clear linguistic handicap. At the same time, I relished the fact that one of us knew the language, saving us both from that feeling, all too familiar, of arriving in a new country, clueless about geography and customs, with a lexicon limited to "Good morning" and "Thank you".

One of the drivers, a sixty-year old woman, told us about growing up in São Miguel. She had never visited mainland Portugal in her life, even though she lived in Canada for more than ten years. This seemed odd to me, until I remembered how unrelenting the flow of Portuguese immigrants to North America had been in the nineteenth and twentieth centuries. The Azoreans were the first group to emigrate en masse, starting in the mid 1800s and spiking in 1958, when John F. Kennedy passed the Azorean Refugee Act in the wake of a destructive volcano eruption on the islands. Thousands of Azoreans settled on the American East Coast, forming the largest contingent of Portuguese in America. People from the mainland followed in the 1960s, fleeing poverty and Salazar’s austerity. In flocks, they must have left this beautiful country in search of more prosaic things: income, education, and better health care. I remembered the saying about cows outnumbering people.

Now, however, the islands are climbing onto the tourist radar, bringing visitors from around the world. There is an increasing amount of interest as travellers look beyond continental Europe and Mediterranean islands overrun by tourists. A major draw is the volcanic nature of the Azores, which manifests itself in thermal pools and mud springs, particularly in the sleepy village of Furnas. Walking around the town, among medieval churches and the tiled architecture Portugal is famous for, you can forget what century it is.

Ponta Delgada, the capital, is home to several restaurants, both traditional and modern. My favourite during our stay was Boca de Cena, a modern Portuguese restaurant run as a one-man show: the owner is at once the host, chef, waiter, and sommelier. At the end of our meal, he came to greet us and told me he had never met a Pakistani in his life. On our last day, we ate at the Associação Agrícola de São Miguel, which serves steak in all shape, form, and marinade, putting to use the thousands of grass-fed creatures grazing the island.

We also tried several of Portugal’s beloved seafood dishes: shrimp in garlic sauce, grilled octopus, limpets, and a cod stew cooked underground using geothermal volcanic heat. The Portuguese pride themselves on the freshness of their seafood and the simplicity of their cooking. Often times, the only ingredients at play are salt, garlic, and a liberal amount of olive oil. If they’re feeling adventurous, they might add some parsley, a hint of crushed peppers. Somehow, it works.

After five days of bliss, we boarded the flight back to New York. I wondered how long these islands would remain pristine the way they appeared now. I wondered when the hordes of tourists would arrive as they ran out of land elsewhere. There is no doubt that tourism has been good to the islands. As a self-sustaining, semi-autonomous entity that grows most of what it needs, the archipelago remains cut off from the rest of the world. Interaction with travellers, and the financial influx that it inevitably brings, will help the locals. It will convince more and more young people to stay on the island and partake in the burgeoning economy, instead of making their way to the mainland or to North America. And yet, I can’t help but wonder what will be lost in the process: how many pastures will give way to shiny hotels, how many airplanes will start dotting the pristine skies. Will humans outnumber cows in São Miguel one day?

The island no one told you about