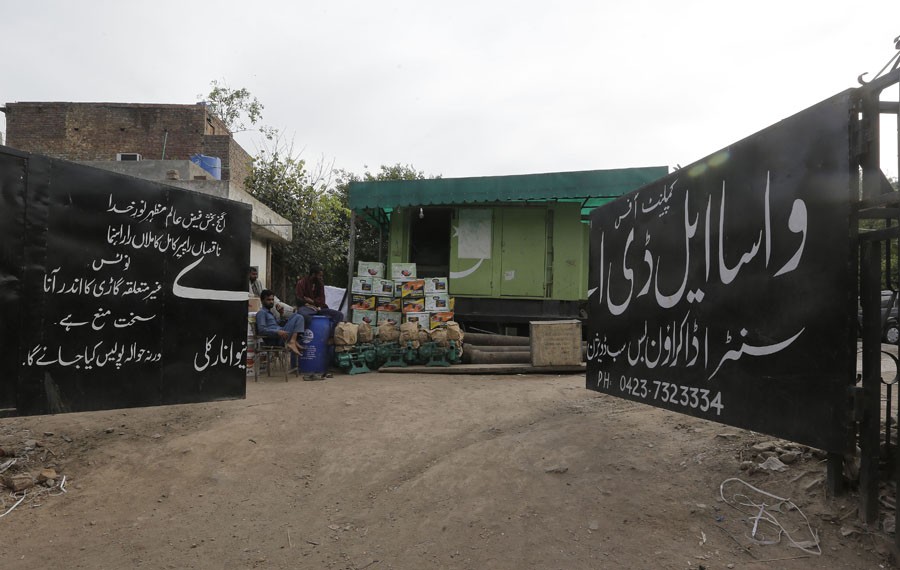 The old Circular Garden around the Walled City adds beauty to the historic structure built centuries ago. Besides, it provides an opportunity to the locals to take a walk and, in case you have children accompanying you, indulge in sports activities.

As there are hardly any open and green spaces inside the Walled City, the residents come out through the main gates or other openings in the wall to breathe in fresh air. There are places where the women are in higher concentration than men and can be seen walking on the ends of the garden, while reciting Quranic verses and prayers, especially after Fajr.

But this is not the case at many other points in the garden that runs along the wall. At these spots, one finds the garden encroached upon by different entities or destroyed by the commercial activity going on here. This makes it difficult for the locals, especially women, to access the garden. Neither they find way to cross the obstructions raised here nor they feel comfortable in the presence of so many people gathered here for one reason or the other.

The Water and Sanitation Agency (WASA) office located in the garden next to the Akbari Gate is one such troubled spot. Here, structure upon structure has come up over the years which have made the location out of bounds for the locals. Ghulam Moheyuddin, a resident of Akbari Gate, says that it all started with the installation of a tubewell at this point. Later on, he says, the WASA people set up an office here, placed a huge generator and even allowed transporters to offload their goods.

He says that since the office has a proper gate that can be locked and there are security guards as well, transporters feel their goods are safe. This is just one example of how the green spaces of the city have been encroached upon and there are many others like this. Jinnah Park, close to the Hide Market in Northern Lahore, is another example. This park is maintained by the Parks and Horticulture Authority (PHA). Here one finds three different structures built at a close distance from each other. Two of these structures have offices and sitting areas whereas the third one houses a tubewell in working condition. A huge generator is also placed here that makes the park even more congested and leaves little place for the locals to move around. Years ago, families from the locality and nearby areas would come to the park for a walk and light exercise but now the number has reduced.

Babar Ali, a real estate agent, tells TNS that these structures have become hideouts of criminals and dens of drug addicts because they are lying vacant for years. "In fact, these buildings had tubewells that are no more in working condition. Under the law, these should have been demolished at the time of installation of a new tubewell at a distance from here but this did not happen," he says.

The issue of encroachments on parks and greenbelts recently caught the attention of the Supreme Court of Pakistan (SCP). It took notice and ordered the removal of encroachment from a park near the house of the federal minister for finance Ishaq Dar.

The apex court also sought replies on the alleged occupation of land, meant for building a public park in Harbanspura, for construction of a grid station.

So, it is quite common that public parks and green belts have encroachments like Wasa tubewells with buildings around them, union council offices, installations of electricity supplying company, and warehouses of goods transporters etc. What’s most disturbing is that there is little action despite repeated promises by the authorities to remove these.

PHA Spokesman Shahzad Tariq explains that the authority does allow setting up of tubewells at parks under their control but there are certain conditions that have to be met. For example, "there is a condition that the old tubewells and the surrounding structures, if any, should be removed to leave maximum open spaces for the people. But it is not always followed.

"But we do keep on following up such issues with the concerned departments."

Tariq further says that the PHA carries out cleanup operations from time to time and has removed many encroachments from greenbelts as well as recovered park lands from illegal occupants over the years. "The PHA manages 850 parks in the city and this number has increased from 500 at the time of setting up of the authority. This shows how proactively we have acted against encroachments."

Naseem ur Rehman, Director, Environment Protection Agency (EPA), says that the Environmental Impact Assessment (EIA) has been made compulsory for setting up of grid stations in residential areas. In the past, these could be set up without completing the process but not now. "This was in response to a complaint about a grid station eating up the land meant for a public park that the SCP took notice of. However, the case was dismissed once the respondents could prove that there was enough land left for the park even after the construction of the grid station."