Making of a national movement 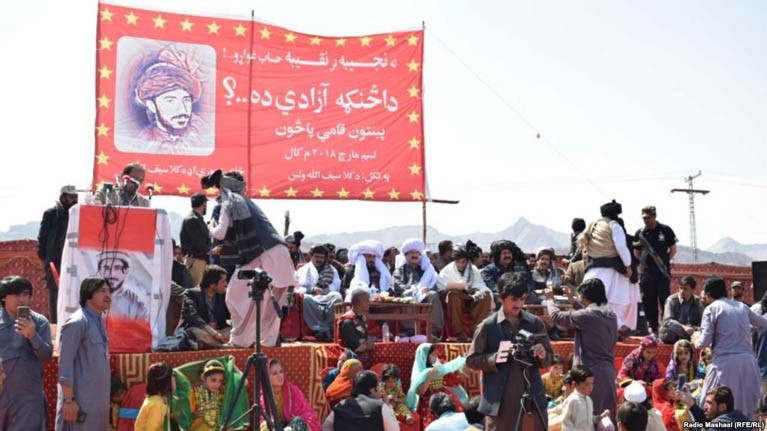 Since the Lawyer’s Movement, no mobilisation has captured the imagination of such a large segment of the population. While some academics call the Lawyers Movement a ‘protest’ because it remained restricted to the legal community, the beleaguered political parties and urban middle classes got exceptional support from the electronic media which made that movement significant.

On the contrary, the Pashtun Tahafuz Movement (PTM) has genuinely come from the grass roots, led by the most marginalised. Only after the mass of the Pashtun youth was galvanised did the electronic media finally take notice of it. While Pashtun intellectuals have written glowingly on the impact the PTM is having on the Pashtun youth and society irrespective of party affiliation, by breaking out of the fear and public silence on the Pashtun experience, my concern in this column is to explore whether something similar can be achieved at the national level.

In terms of narrative, the PTM has raised structural issues critical for Pakistan’s future: one, the unaccountability of state elements who operate against their constitutional mandate, such as extrajudicial killings and enforced disappearances of which Pashtuns have been the most affected other than the Baloch; two, the militarisation of state and society with the state’s usage of Pashtuns and the madrassa underclass as canon-fodder for its own policy objectives in the region with a perpetual war in Afghanistan as an outcome; three, terming those who question the establishment’s policy and actions anti-state and traitors, because with such a narrative, issues related to landmines and check posts as well as policy reassessment for Fata, Balochistan, Afghanistan and India, of which army is the dominant actor, is just not possible.

Here, the basic framework of the PTM, articulating the struggle as Pashtun’s right to life and dignity as enshrined in the constitution of Pakistan, is unquestionable. Further, its leaders’ often referencing of humanity (insaniat) as a reference point suggests that the movement can prosper into a civil rights movement for constitutional rights of all citizens.

According to literature, non-violent civil resistance has a higher success rate than violent resistance, especially against a strong state. However, success requires effective bringing together of people, disciplined non-violence, effective and evolutionary strategy, increasing people’s participation, response to coercive measures and, lastly, converting or neutralising the movement’s detractors. The PTM has so far done well on most counts by staying true to non-violent resistance, peaceful mobilisation and by inviting Pashtun women to speak at its rallies.

While a national civil rights movement is the need of the hour and the Pashtun youth are well placed to lead it, the PTM will need to devise a workable strategy with progressive local actors to inspire the Punjabi youth out of their indifference.

Can the movement achieve its goals while being restricted to Pashtuns who are but a minority in the country?

For this, Pashtuns are best placed in the country to lead a civil rights movement because they belong to an oppressed group while at the same time have a truly federal presence because of displacements and migrations, and have the numbers and resources that the Baloch lack. But the reality of the youth’s federal character can be assessed from the structure of youth organisation at the federal Quaid-e-Azam University where antagonistic ethnic councils dominate student politics rather than ideology or ideas.

While the movement has done well by inviting the Baloch and Hazara to its rally in Quetta, as well as reached out to the Punjabi youth through Manzoor Pashteen’s visits to LUMS and FC College Lahore, this is but a start in increasing the movement’s federal reach.

The PTM will have to allay the Baloch and Hazara concerns of Pashtun dominance in Balochistan, extend a hand of peace to the Mohajir youth in Karachi where a tentative peace prevails between the two communities and reach out to the Sindhi youth who perceive both these communities as colonisers of their land. This may be possible by bringing different ethnicities under a collective oppression frame, as Pashteen, while answering a question of a student from Gilgit Baltistan regarding limiting the movement to Pashtuns, when Gilgitis were not even second but third class citizens, stated that "we could change the name of the movement to Mazloom (oppressed) Tahafuz Movement to include all the oppressed".

But the movement’s biggest challenge will be to awaken the Punjabi educated youth from its de-culturalised, de-politicised consumerist slumber with little comprehension of the other’s oppression, even the ethnic profiling within their midst. Nor have they the opportunity of political learning that Pashteen got by presiding over Gomal University’s student union. Thus, it is no surprise that the majority of the student body stayed indifferent in the Punjab University when the fascist Jamiat (IJT) attacked the Pashtun and Baloch students for celebrating their culture publicly in the university.

While a national civil rights movement is the need of the hour and the Pashtun youth are well placed to lead it, the PTM will need to devise a workable strategy with progressive local actors to inspire the Punjabi youth out of their indifference.

Making of a national movement