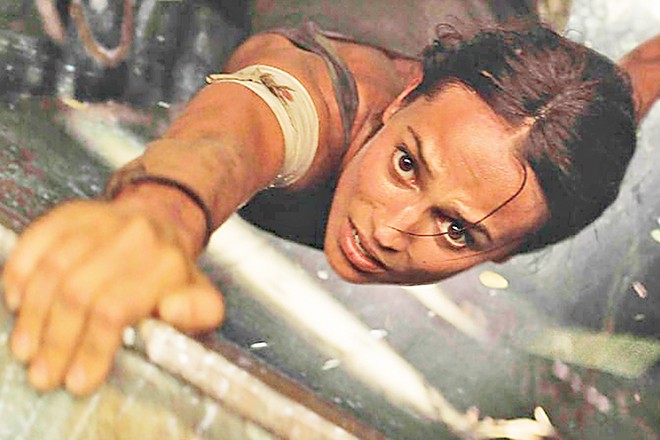 She’s the perpetually on-the-move, preposterously curvy heroine of PlayStation RPG fame, the archaeologist with the blazing pistols and the bare midriff. She’s fought dinosaurs and ninjas, dodged poison darts and scaled mountains and leapt over ravines and liberated treasures from more subterranean ruins than you can count. The lady is an icon that’s launched a videogame empire and inspired endless cosplay. Now meet Lara Croft: Bike Courier!

This is the scrappy character we meet at the beginning of Tomb Raider, a prequel/reboot/franchise Hail-Mary pass that rewinds back to Ms. Croft’s formative years - specifically, her twentysomething days in London practicing Muay Thai boxing and delivering packages on a 10-speed. As played by Alicia Vikander, the Oscar-winning Swedish actor from Ex Machina, she’s a world away from Angelina Jolie’s sleek action-film supermodel from 2001’s Lara Croft: Tomb Raider and its 2003 sequel. "I’m not that kind of Croft," she keeps repeating in reference to her missing father Lord Richard (Dominic West) - the double meaning could not be more clear-cut. You wouldn’t catch Jolie’s version engaging in a "fox hunt," tooling lightning-fast through metropolitan traffic and barely avoiding bodily harm as bikers chase after her. The set piece suggests that Norwegian director Roar Uthaug is going to do for the series what he did for disaster movies with 2015’s The Wave, i.e. invigorate familiar raw material with puckish verve and extra forward momentum. He doesn’t want to make another cheesy blockbuster. He wants to make Run, Lara, Run!

Savor that breakneck sequence, however, because such adrenaline rushes are about to get scarce. No matter how many neato puzzles you give Croft to solve and hidden rooms to unlock in pursuit of her presumed-dead Dad - he’d been tracking some sort of Japanese queen and possible world-destroying demon named Himiko - you can’t make a movie out of a popular globetrotting game by keeping it in Old Blighty. So it’s off to Hong Kong, to meet up with Lu Wen (Daniel Wu), a drunken boat captain who can ferry her to the remote island where Lord Richard was heading. A shipwreck occurs, which astute players will recognize as a near-faithful recreation of the gritty 2013 Tomb Raider game’s cut scenes; it’s one of the few outright fan-service moments in the film. Then Croft finds herself a prisoner of Matthias Vogel, a secret-society operative played by Walton Goggins in full Kurtz mode. (The fact that he doesn’t adopt a Brando lisp and whisper "The Lara … the Laaaarrrraaaa" is, let’s be honest, a major missed opportunity.)

This bad guy is also after Himiko’s burial place, and thinks that Lord Richard’s daughter has the info that will finally lead him to it. Lara escapes, outruns some mercenaries with manbuns, manages to work her way across narrow logs over raging rivers and through a rusted-out jet fighter, puts a bow and arrow to good use and engages in some good ol’ fashioned jungle-adventure stuff. It’s probably not a spoiler to say that Croft, Lu, Vogel and several other folks eventually gain entry to Himiko’s grave site, which rests in the middle of a large underground lair filled with traps. You know what happens next. Tomb raiders gonna tomb raid!

Whoever dreamed of casting Alicia Vikander as this generation’s run-jump-slide Joan of Arc deserves a raise. Tiny and lithe and capable of either projecting lioness-level ferocity or ferret-like wiliness, she’s an ideal screen Lara Croft in a lot of ways; her physicality doesn’t feel superhuman and her vulnerability doesn’t cancel out her badassness. Like the games’ modern rebooting of the heroine, Vikander plays her less like a voluptuous fanboy fantasy and more like someone you’d meet on an Outward Bound trip. It’s a pleasure to watch her solve puzzles and sprint through dangerous obstacle courses, even if the sequences themselves often feel like stock footage from other blockbusters or random gameplay she’s been digitally inserted into.

Which underlines the overall problem here: No matter how much Uthaug tries to add elements to make this a sleeker model, the movie keeps bumping its head against a ceiling of limitations and expectations. If you make a Tomb Raider film, you have to bring the fun of playing the game with the thrill of watching those exploits transcend the interactive experience. Like most attempts to translate your favorite console-jockey titles to the multiplex, this never figures out how to properly split the difference. Tomb Raider may be a less camp, more cunning take on the arts and Crofts that have made the brand a hit, but to call this a better-than average videogame movie is to damn it with faint praise. Don’t hate the players. Hate the genre.