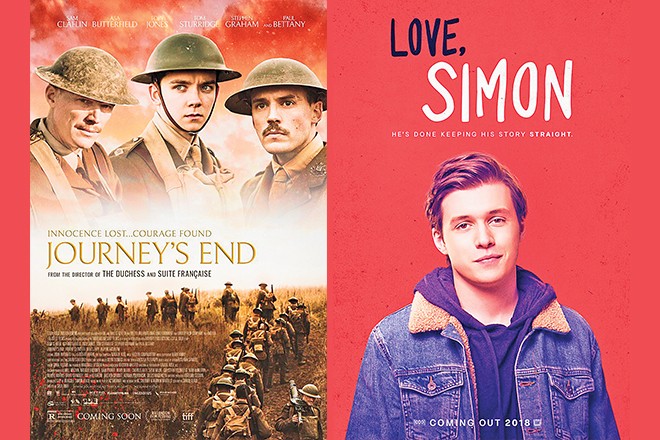 A seemingly ordinary coming-of-age tale that looms large because of its inclusive romantic embrace, Love, Simon wins you over by capturing your heart without pushing too hard for the prize. Given the recent high points of gay cinema on the indie circuit - the Oscar-garlanded Moonlight and Call Me By Your Name being the most high-profile examples - it’s a surprise to learn that director Greg Berlanti’s extraordinary drama is the first mainstream studio release to put a closeted teen front and center. Television has been way ahead for years on this front. This adaptation of Becky Albertalli’s YA novel Simon vs. the Homo Sapiens Agenda goes gentler into the topic than you might expect - or perhaps want. But the safe, PG-13 approach could win a wider audience for a movie that gay teens, raised on straight romcoms, have been longing to see for generations.

It helps that Berlanti, who’s been making innovative changes on the TV teen scene with shows ranging from Dawson’s Creek to Riverdale, is just the guy to bring a cutting edge to the non-threatening script from the This Is Us team of Elizabeth Berger and Isaac Aptaker. It also helps that he’s a whiz with actors. Nick Robinson (Jurassic World) is wonderfully funny and touching as Simon Spier, a senior at an Atlanta high school where coming to terms with your sexuality is, well, as hard as it is anywhere else. His parents (Jennifer Garner and Josh Duhamel) seem liberal enough to handle the news. But Simon is too uncertain to open up to them about sex. Did Dad just refer to some guy as "fruity?" Yes, he did.

"I’m just like you, except I have one huge-ass secret," our hero informs us in a voiceover as he watches a hunky gardener get busy with a leaf blower. He hangs at school with Leah (Katherine Langford), soccer jock Nick (Jorge Lendeborg Jr.) and new girl Abby (Alexandra Shipp), but these loyalists - or his friend with the acidic wit, Ethan (Clark Moore, terrific) - are not enough to spur him to say it loud and say it proud. Berlanti keeps the laughs bubbling with these characters and with the school’s vice-principal (Tony Hale) and drama teacher (all hail Natasha Rothwell!). But the fear nagging at Simon never really dissipates.

That’s one reason why he starts an anonymous online hook-up with a classmate, who calls himself "Blue" and seems equally reluctant to tell the world who he is and what he feels. Their email relationship is the core of the film as Simon tries to ID Blue from a list of suspects including studly Bram (Keiynan Lonsdale), musician Cal (Miles Heizer) and friendly waiter Lyle (Joey Pollari). In a highlight scene, Simon imagines an out future for himself in college set to a Whitney Houston dance number. Things get complicated when Martin (Logan Miller), a creepy classmate, discovers Simon’s secret and threatens to blackmail him with it unless he sets him up on a date with Abby.

Yes, the plot mechanics tend to lean toward the disappointingly slick and sitcom-ish. But what redeems the film and makes it such an exuberant gift is the sincere joy Berlanti and the actors take in celebrating its protagonist’s growing self awareness. Love, Simon is a John Hughes movie for audiences who just got woke. And for all its attempts not to offend, it’s a genuine groundbreaker.

Over three days of fighting in March of 1918, British soldiers stuck in the WWI trenches of northern France and their commanding officers quartered below await a German attack. Raleigh (Hugo‘s Asa Butterfield), an inexperienced 19-year-old officer, had actually requested to join C Company, led his much-beloved former school housemaster and prospective brother-in-law Captain Stanhope (Sam Claflin). The latter tries to hide his rattling insecurities and mask his depression in booze and the counsel of his second in command, Osborne (Paul Bettany). Before the war, the lieutenant was a teacher and a family man with a knack for holding things together, or trying to, at least. But the brass know this will result in near-total casualties. It’s just a matter of when the bombs are going to start falling.

Director Saul Dibb (The Duchess, Bullet Boy) makes no effort to update R.C. Sherriff’s 1928 theatrical firestarter to suit modern trends. The dialogue, formal and courteous via a screenplay by writer/producer Simon Reade, is free of profanity, lacking the grenades of f-bombs so typical of the genre. The usual male bravado is replaced by a crushing vulnerability shared by tender comrades - these men have been in the war for years and hold few hopes in its final months of emerging alive. The vise-like tension grows out of the waiting, punctuated by bursts of action that achieve an explosive impact enhanced by their brevity. The play stayed mostly with the officers. But the film, drawing more on the later novel by Sherriff and Vernon Bartlett, opens up the action and expands to let us see every man facing his own individual fears. Toby Jones adds welcome humor as the company cook. Stephen Graham and Tom Sturridge make indelible impressions as soldiers pushed to the breaking point.

But Journey’s End brings out the very best in its trio of leads. Butterfield is heartbreaking as the blank page on which this tragedy is written, while Bettany brings much needed warmth to the bitter chill of the frontline trenches. But the film belongs to Claflin. Best known as pretty boy decoration in such hits as The Hunger Games, Pirates of the Caribbean: On Stranger Tides and Me Before You, the actor is a revelation here, catching every nuance as disillusion eats away at Stanhope’s once profound humanity.

This World War I story has been filmed several times, most notably by James Whale (Frankenstein) in 1930. But Dibb’s version is the finest to date, accentuated by the haunting music of Icelandic cellist Hildur Guónadóttir. Only Stanley Kubrick’s 1957’s anti-war masterpiece Paths of Glory, which also tackled life in the trenches of The Great War, can top it for ferocity and feeling. Journey’s End is a bleak, sobering experience that puts audiences through a wringer. It’s also an emotional powerhouse you will not forget.