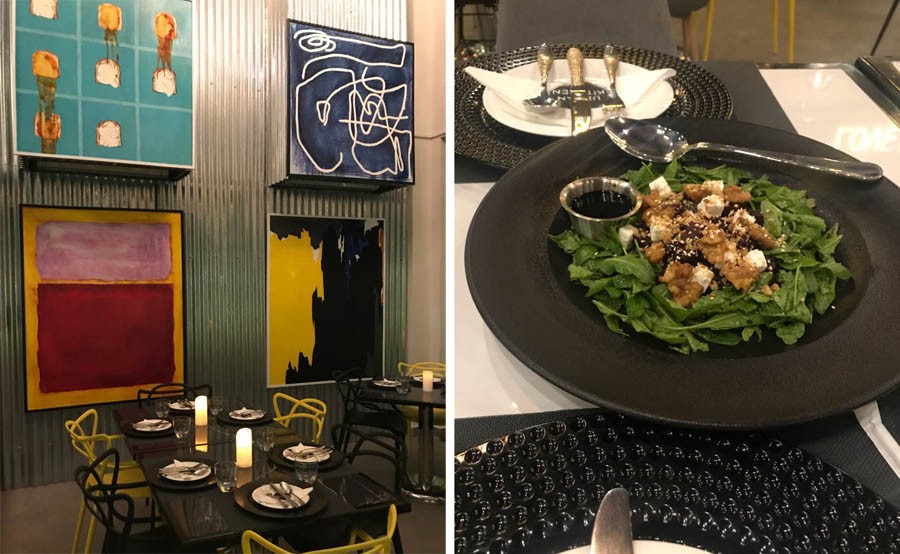 I’d easily call it a new experience in comfort food. That’s what Urban Kitchen, Lahore’s newest eatery situated close to Mini Market, turned out for me.

For one thing, its interior is a study in creative (read playful) use of space. Aside from the vintage photographs that occupy the walls in the main reception area, you meet bright yellow(!) chairs, some pop art, a handful of mirrors and murals, all blending surprisingly well together. Expect one corner of Urban Kitchen to be wildly different from the other.

Upstairs, the roof with iron rods has the semblance of a factory area. Experimental, you’d say. Well, quite.

According to designer Sania Ali, who is also one of the four owners that include her brother Faisal Khan, "We wanted it to be a very cosmopolitan place, inspired from so many things about some of the biggest cities of the world. It had to be a very contemporary, artsy space."

A lot of the main meals offered by Urban Kitchen are decidedly new for the taste palette of a Lahori, unless you are widely travelled.

Khan, on the other hand, is a business graduate from the US, who trained to be a chef, as he "was always into cooking, and was able to replicate dishes having just tasted them!"

While going through the menu, I realised that the recipes for dishes had been developed in a unique way. As Khan put it, "Chefs are being offered consultancies by different restaurants on the basis of the number of spin-offs of Aylanto or Zouk recipes that they can produce. But the people are disapproving it."

As a welcome drink, I was served the refreshing ‘Bahama Mama,’ a concoction of pineapple, ginger, and coconut, while my friend got a glass of chilled juice of beetroots, carrots, and apples. Their fuzzy lemonade and detox green also attracted our attention.

Next up was a bowl of salad, interestingly called ‘Beet Around The Bush.’ This, we were told, has baked beetroot laid out on a bed of spinach with feta cheese, toasted with sesame seeds, and garnished with candied walnuts. This one was surely divine.

If comfort food is what you are after, nothing beats a generous helping of creamy ‘Oozy Mac And Cheese.’

Well, their list of appetisers is pretty long. We opted for ‘Chili Corn Carne Fries’ that should find fans among all age groups. I found the plate of beef, beans and a mix of spices loaded with cheese a tad too heavy, but I’m sure a cheese lover would hate to agree with me.

We now ordered Urban Kitchen’s signature ‘Hong Kong Fried Beef Ho Fun,’ loaded with thick noodles made out of rice and wok fried on a very high temperature. It had beef fillet, chopped in Asian style, with onions, fresh bean sprouts, and a base of black. The rice noodles are imported for authentic flavour, we were told.

‘Spaghetti Bolognaise’ struck us as a very authentic recipe, prepared on a base of celery, carrots, and meat sauce, and slow-cooked for 4-6 hours. The mistake that most people make while trying this dish at home is that they boil the spaghetti too much, which breaks it, turning it mushy.

‘Picante Poppers,’ a side dish, could be consumed as a main meal; it’s that rich. ‘Jalapeño Cream Cheese,’ wrapped in a layer of chicken breast, with bread crumbs, is surely another dream item.

A lot of the main meals offered by Urban Kitchen are decidedly new for the taste palette of a Lahori, unless you are widely travelled. You will get ‘Oishii Katsu’ curry which those of us who have been to the famous Wagamama restaurant in London love. This has been especially curated by the chef.

There is Nawab’s ‘Butter Chicken,’ ‘Beef Stroganoff,’ ‘frito d misto,’ Lissongrove’s ‘Fish and Chips,’ and so on. We skipped ‘Alfredo Pasta’ and a range of club sandwiches, and jumped straight to their desserts which looked too tempting. Who can resist the delightful nutella-laced bread pudding, for instance?

We also tried ‘Parisian Apple Crumble Tart’ with a dollop of vanilla ice cream. This tasted so good, compared to the many chocolate options one has had.

Again, there was a whole lot to choose from: the traditional New York cheesecake, fudgy hot brownie, grandma’s bread pudding, a variety of milkshakes -- you name it.